How Much Does It Cost To Own A NASCAR Team? 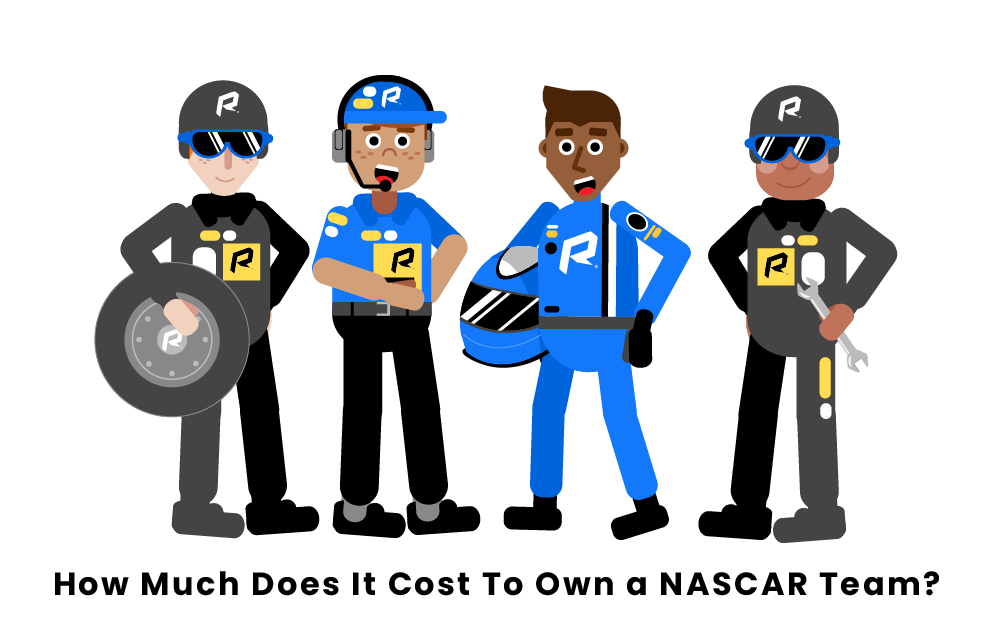 Owning a NASCAR team can be expected to be a very hefty investment. It involves many expenses, all of which cost a large amount of money. The expected total for owning a NASCAR team is nearly $400,000 per week, which over the 38-week season, is on average more than $15 million in annual expenses. BK racing, as an example, which featured two full-time cars, and one car that was featured in nine races throughout the season, spent more than $18.1 million to compete in the 2016 season.

To buy the engine and the gearboxes for the car to be able to race costs $43,000 each. However, the most expensive part of the car is the tires. Since the tires are worn out and then subsequently changed so often, the cost of tires is extreme. On average, a season of racing tires costs around $225,000, which is by far the most expensive component of the car. It is estimated that one race can cost more than $1.4 million, and depending on if the car needs to be replaced, it can cost even more. The cost of having a primary car and backup car in case the primary malfunctions is around $980,000. BK racing spent around 28% of their yearly spending solely on leasing the engine and buying tires. Then, the other expenses that the cars require only add to that percentage of money spent on the car, which is one of the biggest expenses that owning a NASCAR team involves.

Employee expenses in NASCAR are very high. Owning a NASCAR team involves a large number of employees because you need a large number of experts in many different fields. BK Racing spent around 27.5% of its yearly expenses on employee wages, whether hourly workers, contract payroll, or driver payroll. Then, the employees need to be given the proper gear to wear during races, fire suits which cost around $400,000, so that they are safe, and those suits need to be dry cleaned, which will cost around $2,400 per race. All these expenses continue to add up, and it can be expected that employee expenses are a very large sum of money that NASCAR team owners must pay.

Additional expenses for the owner of a NASCAR team are often easily forgotten, but that does not mean that they are an insignificant amount of money or are not important things. Some examples of the additional expenses include, but are not limited to, travel expenses, hotel expenses, car transportation expenses, and so much more. These expenses can total around $125,000, which may seem like a lot less compared to some of the other expenses involved in owning a NASCAR team, but it is still a lot of money. Every five years, another $400,000 can be added to that $125,000 because the owner of the NASCAR team has to replace the haulers that transport the cars to the correct racetrack. This only adds more money making the cost of owning a NASCAR team much more expensive.

NASCAR teams have often made the most money and truly earned profits through advertising. Although the prize money is a large sum, advertising, especially for the best teams, is the most effective way to make money through a NASCAR team. However, in order to get the best advertising, the NASCAR team needs to be successful enough that advertisers will want to sponsor your team. BK racing, for example, was not extremely successful, achieving an average finish of only 31st place. Therefore, they did not have many sponsors, making their prize money equal to around 79% of their total income. Like every business, the more successful the team in NASCAR, the more money the owner will make through prize money and sponsorships.

What is the most valuable team in NASCAR?

What is the least valuable team in NASCAR?

The least valuable team in NASCAR is Petty GMS Motorsports which is estimated to be worth only $26 million. Petty GMS Motorsports, owned by Maury Gallagher, is a newer team that has not yet been able to make as much money as its competitors. They are not significantly behind the pack; the second least valuable NASCAR team, Front Row Motorsports, is worth only an estimated four million dollars more, or $30 million total.

Is NASCAR the most expensive racing sport?

Although owning a NASCAR team comes with a lot of expenses and is, as a result, very expensive, it is a very small expense compared to the total cost of owning other racing sports teams. For example, some teams in Formula 1 racing have budgets upwards of $500 million, which, compared to more than $15 million, makes the cost of owning a NASCAR team seem very easy. Other racing sports do cost more to compete in than NASCAR.

Why are NASCAR car expenses so much more than a normal car?

Unlike normal cars, NASCAR cars are expected to be high-performance cars that put stress on every component of the car. To be able to safely race the car, there needs to be advanced engineering that allows the components of the car to be safe enough to handle the extreme speeds that a NASCAR car is expected to go. The natural wear and tear on NASCAR cars happens extremely quickly, so replacing components only adds to those expenses.

Pages Related to How Much Does It Cost To Own A NASCAR Team?