How Many Tires Does A NASCAR Car Use During The Daytona 500? 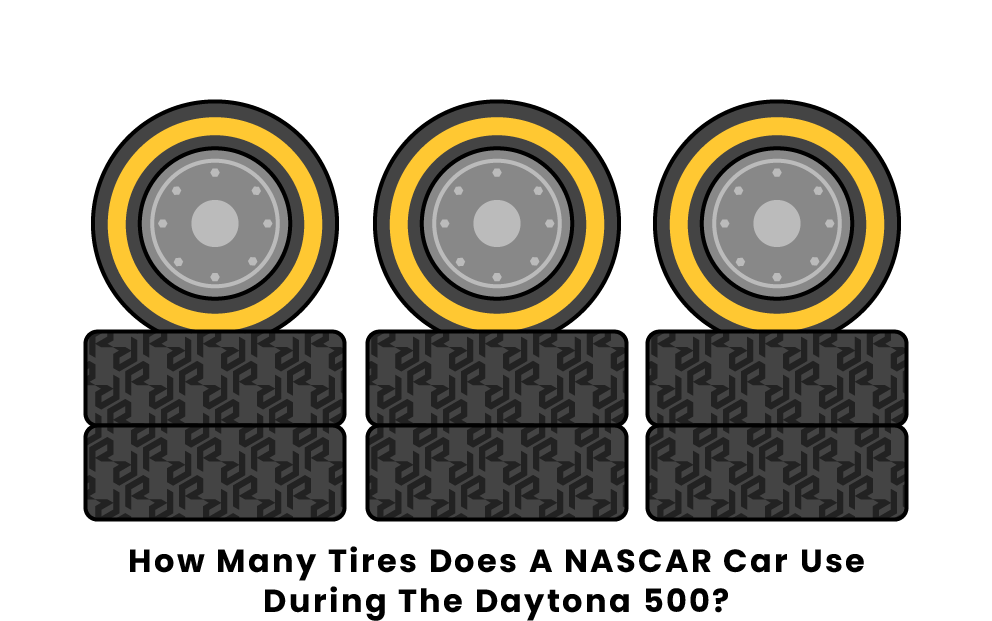 For the Daytona 500 NASCAR teams are allowed up to 8 sets of tires for practice and qualifying as well as additional 7 sets (one set carries over from practice) for the actual race itself. In total, 15 sets of tires are allowed, or 60 individual tires. The actual amount of tires used in the race will vary depending on the driver and team, but the number will typically fall around 20-28 tires for the Daytona 500 race. More aggressive drivers who take tighter or sharper turns will use more tires in a race.

History of Tires Within NASCAR

Before Goodyear became the exclusive supplier of NASCAR in 1997, two other manufacturers were also producing tires for the sport. The Firestone Tire and Rubber Company and the McCreary Tire and Rubber Company were Goodyear's primary competitors in the beginning, but after beating at those two companies Goodyear had its toughest battle with Hoosier. At one point NASCAR believed Goodyear would be the victim of a hostile takeover (affecting NASCAR's operations) and hired Hoosier as backup for Goodyear. These two companies engaged in marketing tactics back and forth, but eventually after so many drivers using Hoosier tires crashed, NASCAR decided it would stick with Goodyear exclusively for the future.

Prior to the 2017 NASCAR season, at the Daytona 500 teams were allowed to have up to 9 sets of tires on the race day. Before the season started NASCAR announced that it would limit the amount of tire sets teams could have in some of their events, this included the reduction from 9 to 8 tire sets at the Daytona 500. This slight decrease means that Crew Chiefs will have to manage their tires more strictly and call for less tire changes.

The tires used by NASCAR are designed to handle the high speeds of racing and each tire can only last for about 100 miles of racing. The tires are designed to have as much grip as possible, especially when the rubber heats up to increase the traction and control for the driver. Due to the fact that the tires do not last for that long, and how many tires each team can have, the cost of the tires becomes very expensive. In 2015 for the NASCAR Sprint Series, $35 million was spent on tires. Each tire costs around $500 and each team goes through $20,000 worth of tires on every race.

Goodyear is the current manufacturer of NASCAR tires and currently offers 18 different models of tires for NASCAR cars. The price and performance of these tires will differ depending on which kind of race they are being used in (short track vs. speedways vs. superspeedways).

All NASCAR tires are currently manufactured by the company Goodyear, which is based in the United States and focuses on tire production for all types of vehicles. Since Daytona's race lap is longer than 1 mile, NASCAR requires all cars to have inner tires and the PSI of the inner tires should be 12-25 more PSI than the outer tires. The minimum recommendation for the PSI of the outer tires is 27 PSI (left front), 27 PSI (left rear), 50 PSI (right front), and lastly 48 PSI (right rear). The tire circumference for the left side should be 2,237 mm and for the right side of the tire it should be 2,247 mm. The rims of the tires are all either 9.5 or 10 inches in length, weigh a total of 24 pounds, and are only ⅛ of an inch in thickness.

While the tires of NASCARs may look bald (no grooves) this actually increases the surface traction the rubber of the tires has with the track. When NASCAR cars are traveling at 200 mph, which is typical for a race, the amount of tread surface the tires have with the track is approximately only half the size of a standard sheet of paper.

Pages Related to How Many Tires Does A NASCAR Car Use During The Daytona 500?