How Long Is The NASCAR Season? 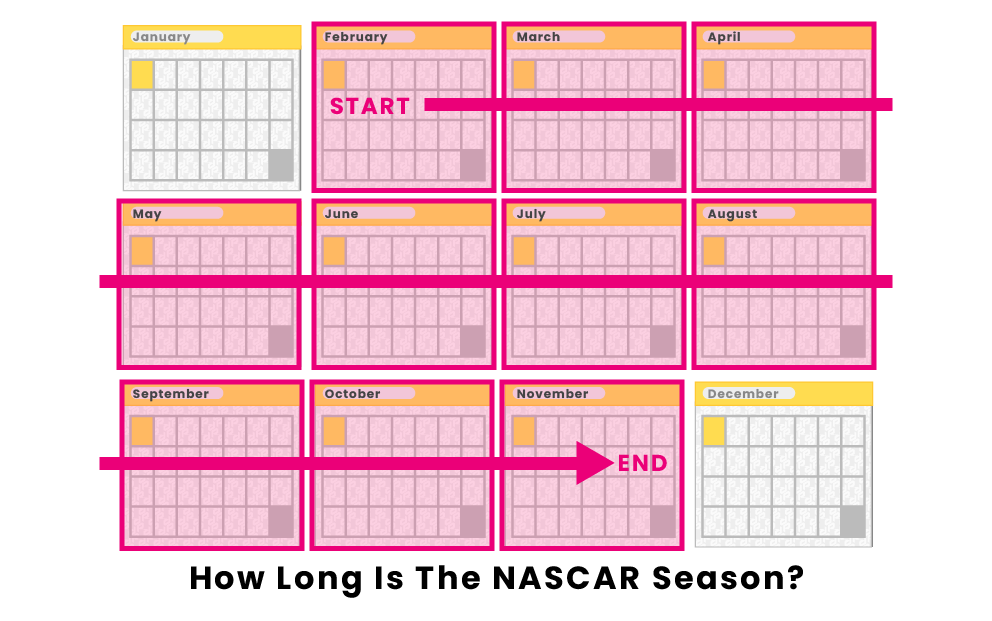 Nascar has several different series that run for different lengths. These series include:

The NASCAR Cup Series consists of 36 races over the course of ten months. Technically NASCAR does not have a defined season, but rather there are 36 races that start in February and go all the way to November. These 36 NASCAR races are the largest in the sport and attract massive crowds due to some of the stadiums having very large seat capacities. Unlike most sports where the biggest game of the season is at the end, in NASCAR their biggest event of the season takes place at the beginning of the season.

The Daytona 500 is the first race of the season, typically attracts the largest crowds, and is the most famous track in all of NASCAR. This race kicks off the long 10 months of racing. Throughout the season, some of the most exciting races are the Dayton 500, the Coca-Cola 600 which is raced at the Charlotte Motor Speedway, and the Ford 400 which is the final race of the NASCAR season and is raced at the Homestead-Miami Speedway.

This league is smaller than the XFINITY Series, but is unique compared to the two other leagues. This is because the cars in this series are modified pickup trucks that can reach speeds of 180 miles per hour. Similarly to the other two series, the Truck Series begins in Daytona in February. Their races are typically 200 to 250 miles which is shorter than the other two series. Since they are driving in trucks, they play some different courses than the other two series which results in them having less races. Typically a full Truck Series consists of around 20 races compared to 36 in the Cup Series.

Pages Related to How Long Is The NASCAR Season?