How Does Scoring Work In NASCAR? 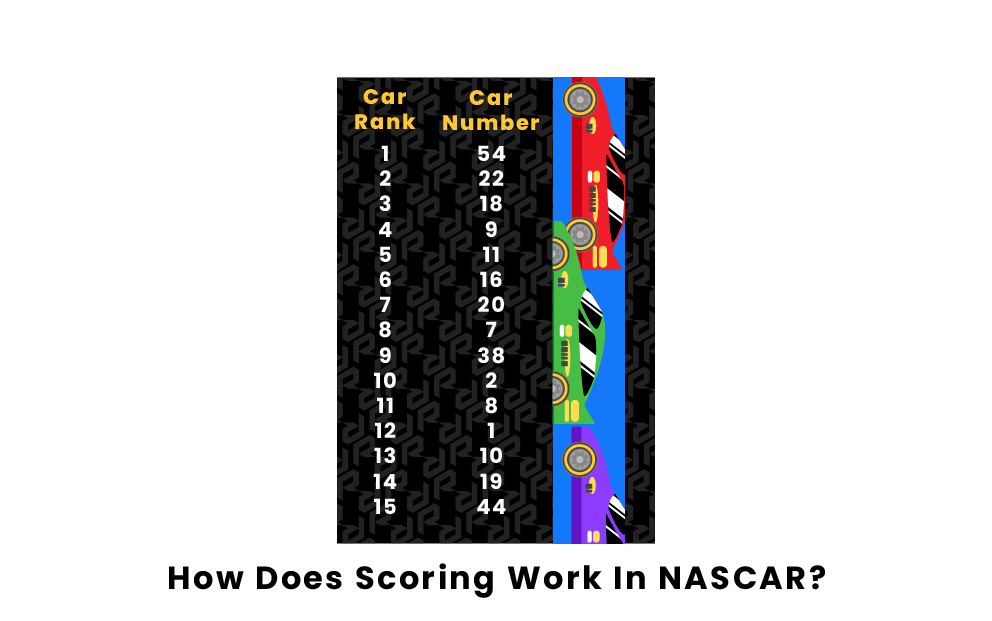 Scoring in NASCAR works differently than in other sports. The NASCAR Cup Series is a series of races, with the top finishers overall and each stage receiving points.

In the NASCAR Cup Series, the winner of the race wins 40 driver points. Points are then given out in descending order based on positioning at the race’s end. The driver in second place receives 35 points; from there, each team below the second-place team will earn one less point consecutively. When down to the bottom five drivers in each race, spots 36 through 40, each driver will receive one point.

Most NASCAR races are broken up into three segments, called stages (the Coca-Cola 600 has four). The first two stages are typically shorter than the third, and each stage lasts a prescribed number of laps. At the end of each stage, the yellow flag is waved, racing pauses, and the top ten finishers receive driver points, with first place getting 10 points and the other top ten getting points in descending order, with 10th position getting one driver point.

In NASCAR, drivers earn points by placing in the top ten of a race stage or finishing a race. Driver points accumulate throughout the season and serve one purpose: to qualify the driver for the NASCAR playoffs.

Drivers can earn a maximum of 10 points for winning each stage and 40 points for winning the race. This means that the maximum number of driver points a competitor in NASCAR can win at a single race is 60, except for the Coca-Cola 600 at Charlotte Motor Speedway, where 70 are possible due to the fourth stage.

There are 16 slots in the NASCAR playoffs, and drivers qualify by the following method. Every race winner automatically qualifies for the playoffs. The remaining slots are filled by the winless drivers with the greatest number of driver points.

Owner points are calculated in the same manner as driver points, except that points accumulate for a car over the season instead of a driver. This means that multiple drivers can earn owner points for the same car if a team changes drivers mid-season or utilizes a backup. Also, drivers who pledged to compete in a lower series are still eligible to earn owner points for their team if they are selected to compete in a Cup Series race. Top racing teams such as Hendrick Motorsports, Joe Gibbs Racing, Team Penske, and TrackHouse Racing compete for the Owner’s Championship in a season-long competition.

Manufacturer points are the total number of points from drivers using the same car manufacturer added up. This pits the three car manufacturers in the NASCAR Cup Series against each other in a season-long competition. Chevrolet, Ford, and Toyota compete for the Manufacturer’s Championship by adding up the driver points earned in each race.

Do you get points for leading laps in NASCAR?

NASCAR drivers do not get points for leading laps in NASCAR or for leading the majority of laps. However, drivers earn points based on their overall finishing position and for being one of the top ten finishers in the first two stages.

Why do they have stages in NASCAR?

The different stages in NASCAR were created to deliver a more entertaining racing product to fans. In 2017, the stages were implemented to increase the commercial viability of NASCAR and to make the race more competitive by deliberately resetting the intervals of the field. By creating multiple stages throughout the race, competition increases because there are more restarts and opportunities for overtaking and upsets. Stages make races more interesting to the viewer, and discourage fans from only watching the last few laps of a race.

How does scoring in the NASCAR points system work?

The NASCAR points system distributes driver points based on finishing position and stage finishes. The most awarded points are for how a driver finishes the race. In a standard 40-car field, the first-place finisher receives 40 points. The second-place finisher receives 35 points, and each position down the standings will receive one less point. Driver points can also be earned for finishing in the top ten positions in the first two stages. Drivers who finish first in stages one and two will receive ten points, and the number of points given decreases by one until the tenth place driver, who receives one point.

How do the points earned at each competition count?

Each NASCAR Cup Series season lasts ten months, and there are 36 races held throughout the season. The points earned at each individual race accumulate, with the drivers who have the most points at the end of the season qualifying for the NASCAR playoffs. Once the playoffs start, the playoff drivers accumulate points for winning stages or races, which allow them to advance to the final rounds of the playoffs.

Pages Related to How Does Scoring Work In NASCAR?