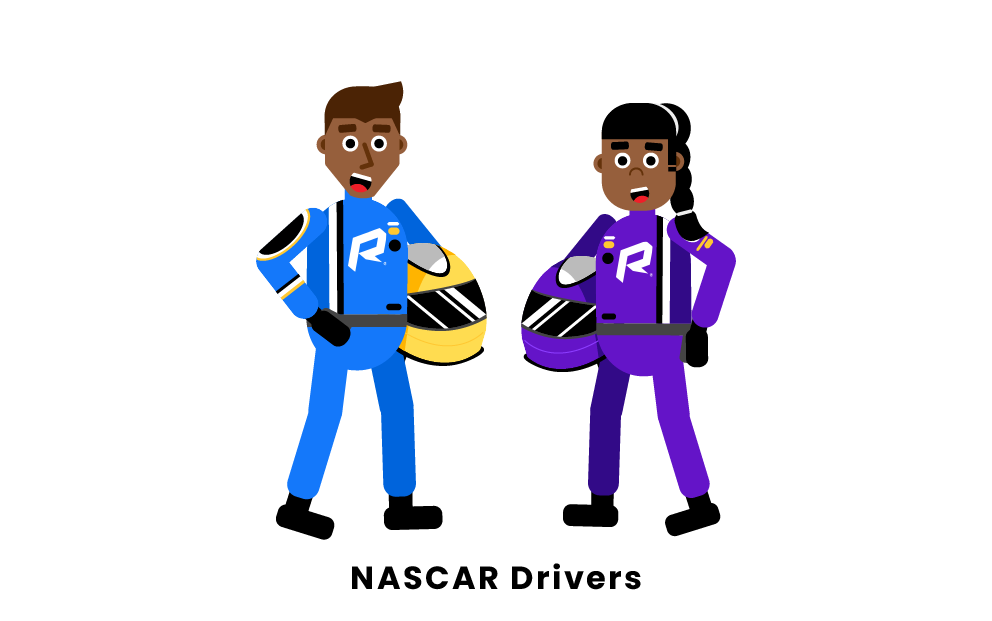 NASCAR is the body that governs hundreds of stock car races each year throughout the United States. The drivers themselves are employed by an individual NASCAR team that participates in sanctioned races. The team usually includes an owner, driver, engine mechanics, pit crews, and more. The driver is paid by the owner and sponsor to participate and win races, which includes bonus prize money and accolades. Teams can have multiple drivers; most teams have full-time drivers, but some use part-time drivers.

The driver is responsible for driving at speeds over 200 miles an hour, maintaining contact with the crew chief to develop strategies, and making pit stops all throughout the races.

Drivers must also attend meetings, training sessions, and media and sponsor appearances. Years of training and constant practice are required to drive at such a competitive level. Drivers must be physically and mentally sharp to keep up with the competition and have years of experience to prove they are worthy of joining a NASCAR team. Like any professional athlete, being a NASCAR driver is a full-time job.

A lot of work goes into being a NASCAR driver; while the obvious job of drivers is to drive competitively, they have other roles outside of the vehicle. Drivers are commonly required to do promotions for sponsors, sign autographs, and participate in interviews before or after races.

Drivers must complete rigorous fitness regimens and observe strict diets. They attend multiple strategy and training meetings throughout the week in preparation for the upcoming race. The best drivers spend a significant amount of their free time training on sim racing rigs at home, honing their strategy for upcoming tracks.

Being a NASCAR driver is a highly skilled job, requiring mental and physical excellence. Drivers need to work well with their team and have strategic mindsets while staying in peak athletic condition. Here are some skills necessary to be a great NASCAR driver:

How Many Hours Does a NASCAR Driver Work?

Like many professional athletes, NASCAR drivers work 50 to 60 hours a week. Over the weekend, drivers live in motorhomes for three days at the track. During that time, they participate in practice and qualifying, attend team meetings, and make appearances with fans and sponsors. Drivers usually have the day after a race off, but the rest of the week is filled with race debriefing and strategy planning meetings, physical training, and training in the simulator. Most top drivers train for around 10 hours a week in a simulator or about an hour and a half per day.

Becoming a NASCAR driver is no easy task, and it requires intense amounts of effort and commitment to reach even the lower levels of NASCAR.

A driver’s training starts at a young age, and practicing and volunteering at local race tracks  can get your foot in the door. Go-karts and Legends cars are an excellent start before moving up to full-size stock cars. It is also important to learn the mechanics of the cars and study other professional drivers to gain a proper understanding of the sport.

Once properly trained, it is important to participate in smaller local races to distinguish yourself and get a feel for competitive racing. Becoming a part of a NASCAR team by volunteering for the pit crew or securing an internship through NASCAR are also great ideas to strengthen your racing resume.

Attending a racing school and gaining a competitive license are crucial steps to achieving the dream of becoming a professional race car driver. All NASCAR drivers need to have a NASCAR license to compete. There are different licenses for each series, with prices ranging from a few hundred dollars for local series to over $2,000 for a Cup Series NASCAR driver’s license. In order to get a NASCAR license, drivers must submit a resume and show that they have the experience necessary to compete in their desired series. Keep in mind that you don’t need to purchase your own vehicle to be a NASCAR driver!

Finally, you need to keep yourself in top physical and mental shape to withstand the heat, G-forces, and intense pressure that driving at hundreds of miles an hour puts on your body. After dedicating all this time to becoming a NASCAR driver, the final step is to use your experience to distinguish yourself to a NASCAR team and convince them that you are the driver that can help them win.

How do you become a NASCAR driver?

As with any sport, NASCAR drivers progress to their level of competition through practice and education. At a young age, prospective drivers often start by racing go-karts, eventually progressing up to cars as young adults, and all the while learning about NASCAR vehicles and how they work. Once they are skilled enough, drivers must attend racing school and receive their racing license.

How many people are on a NASCAR team?

NASCAR teams are larger than many people think, and even though it may seem like they should only consist of the driver and their pit crew, they often number about 100 people. Not every NASCAR team member attends races: normally, the race is attended by members of the team. such as the driver, the pit crew, the crew chief, and the spotter. However, dozens of other operatives, including mechanics, technicians, engineers, and public relations representatives, make up the remainder of a NASCAR team.

How much do NASCAR drivers make?

On average, NASCAR drivers earn between $50,000 and $10 million per year. At the low end of the spectrum, a developmental or rookie driver for the sport may make a fairly similar wage to a normal worker, often around $50,000. However, at the sport’s highest level, professionally-acclaimed drivers often make in the tens of millions, and prize purses for major race wins are often just as large, with the reported prize for winning the 2022 Daytona 500 rumored to be around $23.6 million.