How Do Toyota, Ford, And Chevrolet Engines Differ In NASCAR? 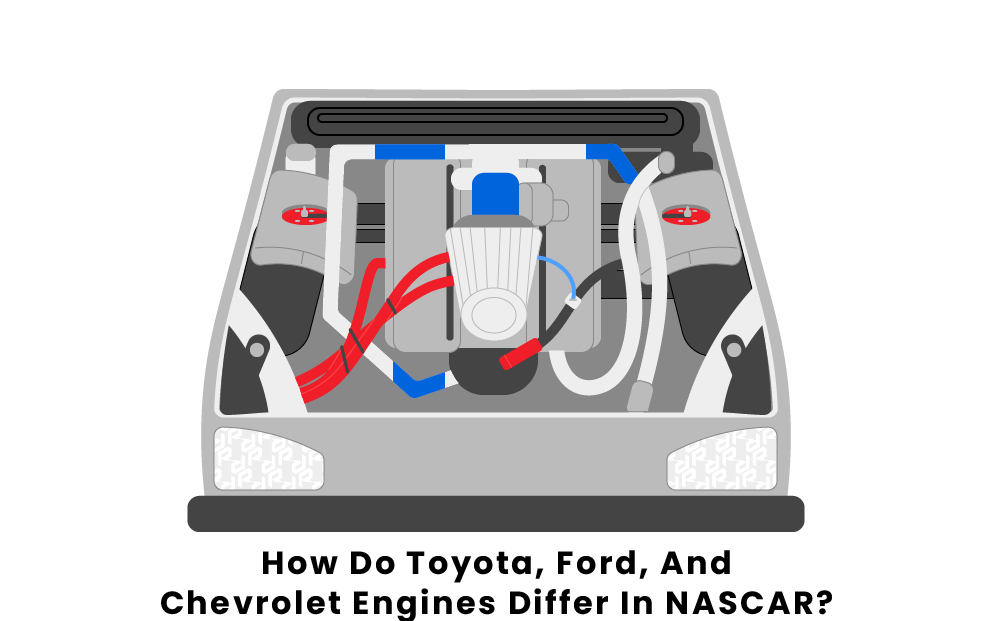 Toyota, Ford, and Chevrolet NASCAR engines are the same size and very similar in structure. The differences between the three engines derive from the fact that certain parts of the engine come from different manufacturers. For instance, Ford supplies engine parts to the Ford NASCAR teams, while Chevrolet supplies engine parts to the Chevrolet NASCAR teams. Find a description of the differences among NASCAR engines below.

What do Toyota, Ford, and Chevrolet NASCAR engines have in common?

NASCAR has strict regulations regarding engine design to ensure an even playing field between drivers. Although NASCAR teams constantly search for ways to improve their cars and make them faster and more efficient than the rest of the field, NASCAR’s governing body goes to great lengths to make sure that no team finds too big of an advantage and starts winning by a huge margin, which would make the sport predictable and less exciting for fans.

NASCAR mandates that the engines used in all race cars abide by very strict parameters meant to level the playing field, keep all three engines on equal footing, and prevent development costs from getting out of hand. This means that Chevrolet, Ford, and Toyota NASCAR engines all have eight cylinders, a compression ratio of 12:1, and are no larger than 358 cubic inches.

NASCAR places limitations on the manner in which engine cylinders are made larger by removing material, a process known as boring the engine. Chevrolet, Ford, and Toyota NASCAR teams must first meet these requirements before tweaking and tuning the car’s engine to their liking.

Since different teams take different approaches to adjusting and improving their car’s engine, maximum unrestricted horsepower can vary among Chevrolet, Ford, and Toyota engines. However, NASCAR limits horsepower based on track size. They limit cars to 510 horsepower on superspeedways and 670 horsepower on all other tracks.

Toyota NASCAR vehicles have a 725 horsepower V8 racing engine. Toyota Racing Development supplies engines for six racing teams. The company builds 350 to 400 racing engines a year for its NASCAR teams. Each Toyota racing engine is built using a process that ensures all engine components are within the parameters set by NASCAR’s governing body. Once the engines are built, Toyota Racing Development tests the engines using a device called a dynamometer, which measures horsepower and torque. This allows the engine developers to monitor how the engine holds up under high RPM.

Chevrolet currently uses an engine known as the R07 in its NASCAR vehicles. The engine debuted in 2007 and marked the first time since 1955 that Chevrolet introduced a completely new small-block V8 engine in NASCAR racing. The R07 engine is also Chevrolet’s first purpose-built engine, meaning that it was designed and developed by GM Racing specifically to be used in competition by NASCAR vehicles. The R07 engine replaced the SB2 engine that had been used by Chevrolet NASCAR teams since 1998. Today, Chevrolet supplies engines for ten racing teams.

Oil plays a big role in the performance of the R07 engine. Oil is used to cool and dampen parts of the R07, as opposed to older Chevrolet engines that relied on oil simply for lubrication. Compared to the SB2 engine, the R07 engine’s camshaft is located higher in the block, meaning that valvetrain dynamics are improved at high RPM. The R07 is capable of operating at 10,000 RPM.

Ford NASCAR cars currently feature an engine known as the FR9. This engine was purpose-built by Roush Yates Engines for NASCAR Cup teams. Roush Yates Engines teamed with Ford Performance in 2007 to create Ford’s first purpose-built, made-from-scratch NASCAR engine. The FR9 was eventually introduced to NASCAR racing in 2012 and is currently leased to eight Ford teams. New engines are delivered for every race.

The FR9 engine replaced the R452 engine, which Ford NASCAR teams had used since the 1960s. A key feature of the FR9 is its superior cooling system, which allows the engine to maintain maximum power at high operating temperatures. The FR9 can produce over 800 horsepower.

As long as the requirements regarding engine design are met, NASCAR teams can modify and make tuning changes to their car’s engine. Clever teams can be quite innovative in finding ways to bypass certain regulations and improve their car’s engine performance. Oftentimes this can lead to disputes between teams and NASCAR regarding the interpretation of certain rules.

What happens if a racecar does not meet NASCAR’s specifications?

Following the race, NASCAR officials dismantle the winning vehicle to check for forbidden parts that may have unfairly enhanced the driver’s performance. This post-race inspection often includes a complete disassembly of the engine and suspension system. Teams can be docked points and fined if it is discovered that their vehicle was in violation of NASCAR regulations.

How are NASCAR engines different from regular engines?

The main difference between NASCAR engines and regular engines is that NASCAR engines are much larger. The combined volume of the pistons inside the cylinders of a NASCAR engine, a measurement known as displacement, is 358 cubic inches. The intake and exhaust are designed to provide a power boost. Additionally, there are no mufflers or catalytic converters that slow the exhaust, a feature that allows for peak performance.

All of the car’s subsystems, such as coolant pumps, oil pumps, steering pumps, and alternators, are designed to run at high speeds and temperatures. NASCAR engines also have high cam angles, which open the intake valves earlier and keep them open longer than an average engine. All these engine features allow NASCAR cars to produce around 1,000 unrestricted horsepower and run consistently at speeds approaching 200 mph.

Pages Related to How Do Toyota, Ford, And Chevrolet Engines Differ In NASCAR?