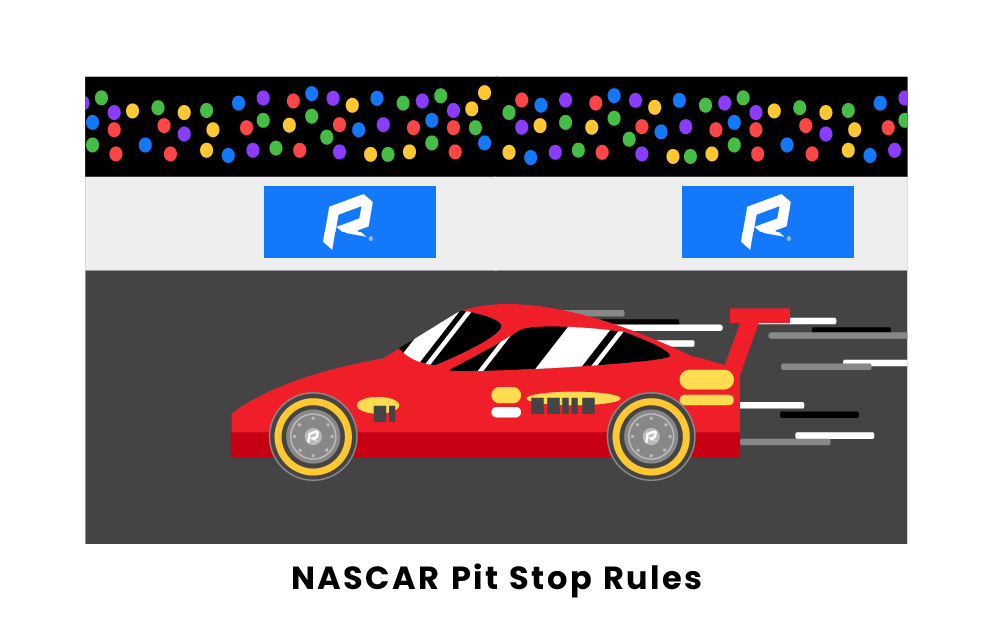 Every race NASCAR releases a new variant of the official rulebook which means that rules and limitations can be adjusted, added, or taken off depending on the course. A regulation pit crew today is made up of two tire changers, a jackman, a tire carrier, and a gasman in the pit lane. The basic pit stop rules that have been incorporated in the majority of races since 2018 are listed below.

Pit crews are regulated in many ways such as their size, location, and techniques. Pit crew members are required by the book to be easily identifiable by their positions around the car as they correlate to a numbering system. This numbering system helps the pit crews recognize possible mistakes in film afterward, communicate faster about positioning, and identify foul play during the race.

Depending on the width and length of the pit road, the driver is required to drive no more than a max speed limit of between 35 and 55 Mph. Failure to do so results in a penalty to the driver's overall time for the race. The driver can also be penalized if they fail to park within their predetermined spot or if they leave the pit stop before the used tires are brought back over the barrier.

Additionally, when the driver runs over a loose air hose during the race they are penalized regardless of the damage the ruptured air hose may or may not have caused. In the event that the driver stalls the car in the pit road, then the pit crew members are only allowed to push it for the length of three more pit crews before the driver is on their own.

In 2011, NASCAR took away the need to have 7 pit crew members over the barrier when they introduced new fueling rules which included switching to E15 gasoline. When included in the 2011 season, it created a league-wide mandate to purchase new eco-friendly gas pumps which reduce the amount of toxic fumes released into the air from the gasoline at a price of $45,000 per pump. With an added locking mechanism that connects the pump to the car, this eliminated the need for a seventh pit crew member.

As NASCAR decreases the average pit crew size and as the cars become more powerful, the dangers of being an active participant of the sport increases. After the death of Dale Earnhardt Sr. in 2001, NASCAR mandated that all pit crew members and drivers were required to wear helmets during the race. Companies that supply car parts to the racing teams are required to test their parts on race day through various teams in order to ensure their performance. An example of this would be Goodyear taking data on the longevity and performance of their tires.