Do Drivers In NASCAR Wear Diapers? 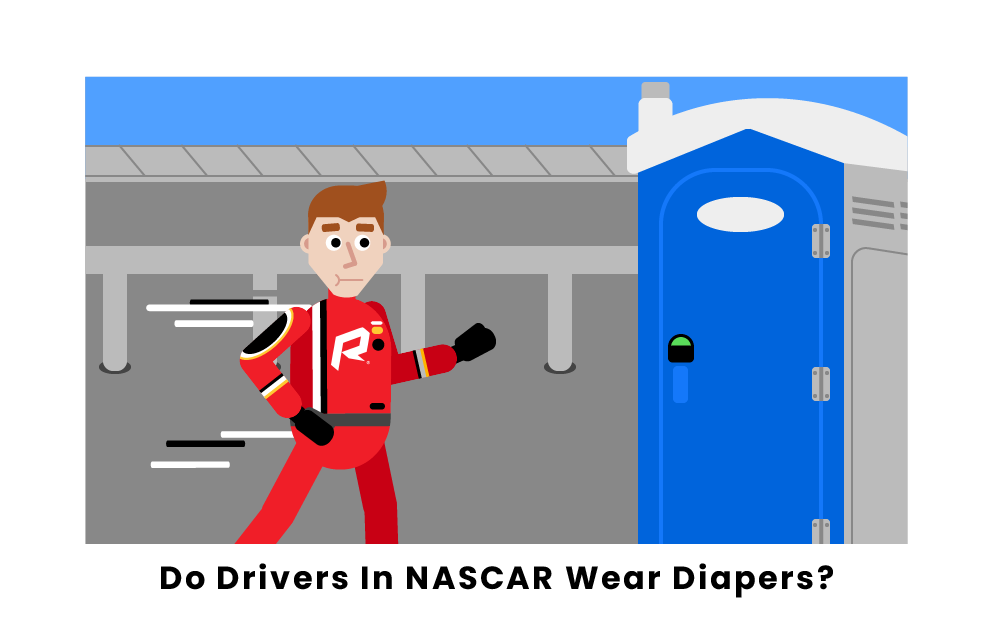 NASCAR has solidified itself as an American past time, drawing huge crowds every year to its events. But when nature calls, where do these racers turn? This article explores the truths and myths of diapers and toilet habits in NASCAR racing.

There is no simple answer as to whether NASCAR drivers wear diapers. The answer is: it's on a case by case basis. Most drivers would not readily admit to the fact they wear adult diapers during a race. Based on research, it is exceedingly rare for a driver to wear these absorbent aids on the course. The wearing of them even lends itself to safety hazards. If a diaper is constructed of natural fibers, this highly increases its flammability. When a car catches fire, the only protection for the driver is the components of their fire retardant suit, anything flammable on the driver's body puts them at risk.

It is not completely unheard of to wear extra padding on the track. In 2013, racer Juan Pablo Montoya was sponsored by Depend, an adult diaper brand which openly advertises their absorbent qualities.

Do Drivers Use The Bathroom During Races?

Rumours of diapers aside, the question still looms of whether drivers must relieve themselves during a race. Racing suits, or fire suits as they are often called, are built with absorbent materials. The track can reach up to 130 degrees, with drivers racing for hours with no breaks.

NASCAR is comparatively a much longer track time than other racing sports. The Daytona 500, Nascar's second longest competitive racing event, is 3+ hours for drivers, with the inside of the car reaching 120+ degrees. NASCAR's Coca-Cola 600 still taps in as the longest race in NASCAR events, with an average length of 600 miles completed at an average of a little under 4 hours. The entirety of these races are spent in the car, so there is no running to the bathroom for the driver to relieve themselves properly. This means that at times, the inevitable does happen.

Racing suits are designed to ensure comfort for drivers even while perspiring profusely in the intense heat. It is some of the only relief which can be offered, as NASCAR cars do not have air conditioning. Adding an air conditioning unit to the car adds unnecessary weight, which can be dangerous for the driver. This can be fixed by suits and helmets designed for drivers having cooling features. If a driver does find it necessary to relieve themselves during a race, it is able to be absorbed and collected by the suit, as their perspiration does.

Dale Earnhardt Jr, son of legendary racer Dale Earnhardt Sr, has been involved in stock racing as a spectator and now as a racer since he was a boy. In 2014 he replied to a fan on Twitter when asked how many times a year he goes to the bathroom during a race. His reply; "One or two times A YEAR. When ya gotta go ya gotta go." It's apparently a very common question for him and other drivers to be asked.

Precautions are taken before racing to avoid accidents, but when nature calls, sometimes the urge to go is unavoidable. In the 24 hours before a driver races, they will often stick to a stricter eating and drinking schedule. Some will take dehydrating salt tablets so that their bodies absorb excessive water. With the high temperatures on the track and in the racecar, oftentimes so much sweat is secreted that the need to urinate will disappear with time. Even so, there are times when a driver just can't hold it.

You may notice an omission of any scat related references in this piece, but this is a common question asked of NASCAR drivers. The simple answer is no, racers do not dirty their suits with excrement while racing. While urine is on the table, feces lead to an uncomfortable driving experience, and could cause health issues for the driver and team. Their suits are equipped to absorb liquids, but not to handle solids. However, accidents do happen, though we're sure a driver with a stomach flu would not readily admit to this sort of unfortunate incident.

Who cleans up if there is an accident?

Members of the pit crew are the unsung heroes of NASCAR. The crew is tasked with maintenance of the car on and off the track. Pit stops ensure that the car has been checked for any potentially hazardous conditions, such as tire pressure or aerodynamic hiccups. A well trained pit crew is key to having a winning team in driving. As they are tasked with cleaning the car of the driver's perspiration, they would also be required to clean up the accident a driver may have.

Is dehydrating oneself safe while competing?

Dehydrating oneself is never safe or good for one's body. However, experienced drivers can train their bladders for competitive events. Preparing oneself physically for a sporting event 24 hours in advance is common in sports. As long as drivers find a balance between proper hydration and avoiding an accident on the track, they should be fine.

Are there any documented cases of NASCAR drivers going to the bathroom while racing?

In 2004, Tony Stewart won the Watkins Glen. While not admitted to, a rumour for years in the NASCAR world is that Stewart, who was not feeling well during the race, soiled his suit due to stomach flu. However, this is unverifiable and could simply be an amusing anecdote. While some drivers are open about having urinated during a race, others reject the idea that this is a common event while racing.

Pages Related To Do Drivers In NASCAR Wear Diapers?