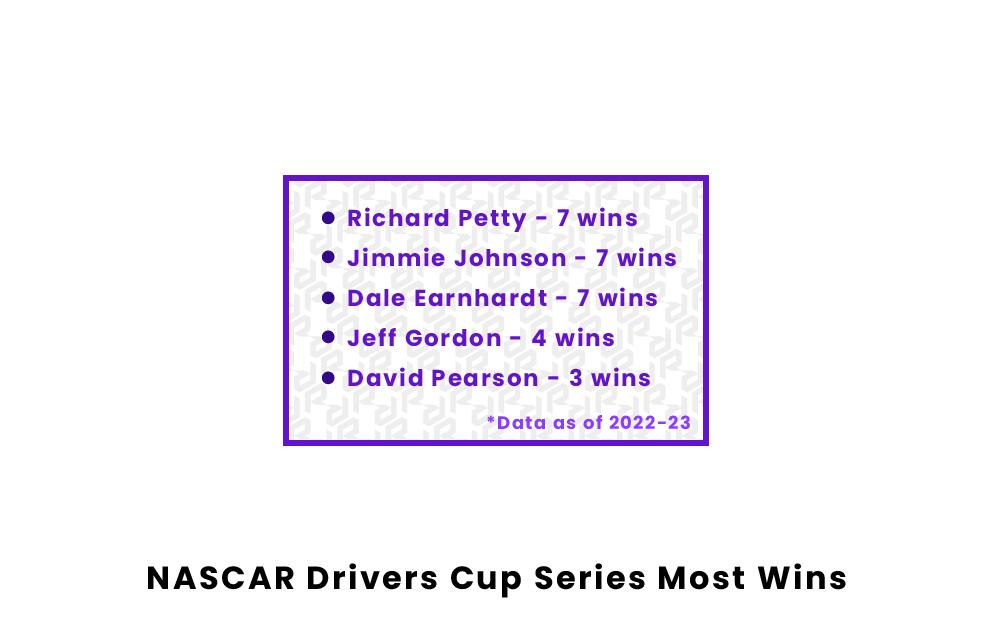 At the end of the NASCAR regular season, the top 16 drivers in points compete in the NASCAR Cup Series Playoffs. The playoffs feature four elimination rounds, culminating in a race between the four remaining drivers, with the top finisher taking home the NASCAR Cup Series Championship title. Prior to the adoption of the playoff format in 2004, the driver with the most race wins won the championship. Keep reading below to learn which drivers have won the most Cup Series titles.

What NASCAR Drivers Have the Most Cup Series Championships?

Richard Petty won seven Cup Series Championship titles in his career, tied for the most ever, and he also owns the most NASCAR wins in history with 200. These accomplishments, among others, make him the most successful NASCAR driver in the history of the sport. He won his first two titles in 1964 and 1967, then proceeded to win five titles between 1971 and 1979, one of the best stretches of driving fans have ever seen.

One other man who can rival Petty’s seven titles is Jimmie Johnson, who has seven of his own. Johnson was the best driver of the modern era before retiring in 2020, but he left with a tremendous legacy. He won five-straight Cup Series Championships from 2006 to 2010 and added two more championships in 2013 and 2016. Johnson is also sixth all-time in NASCAR wins with 83.

Gordon had his share of success in the Cup Series, winning four titles in his career. His first came the year after Earnhardt’s last in 1995. Gordon would go on to win back-to-back titles in 1997 and 1998 before capturing his fourth and final championship in 2001. He is also third all-time in NASCAR with 93 wins.

Though David Pearson is tied with four other drivers at three Cup Series titles, his resume is just a little better than the rest. He is second all-time in NASCAR wins with 105, behind only Petty. Don’t get it wrong, though; Pearson was more than able to compete with NASCAR’s greatest driver. He won championships in 1966, 1968, and 1969, all during Petty’s prime, and will go down with Petty as one of the greatest to ever get behind the wheel.

Which active NASCAR driver has the most championships?

Two active drivers are tied for the most championships, with two each: Kyle Busch and Joey Logano. Busch has been one of the best drivers of modern NASCAR, winning his first title in 2015 and coming back to win his second in 2019. In addition, Busch has racked up 60 wins during his career, good for ninth all-time in the sport. Logano only recently tied Busch’s achievement, winning his second championship in 2022 after earning his first in 2018.

Who has won the most Cup Series Championship titles in history?

There are three NASCAR drivers tied for the most Drivers Cup Series titles in history at seven. Richard Petty, Jimmie Johnson, and Dale Earnhardt have all won seven championships. Petty also has the record for most race wins, winning a record 200 races during his time on the track. Jimmie Johnson finished with 83 wins, and Earnhardt ended his career with 76.

Who is the most recent winner of the NASCAR Cup Series Championship?

Currently, the defending champion of the Drivers Cup Series is Joey Logano. Logano won the NASCAR championship in 2022, his second-ever, and has built up a strong resume in his extensive career. He has accumulated 31 wins total and is recognized as one of the best drivers in the sport.