Do One Wheel Nut Tires Make For Faster Pit Stops? 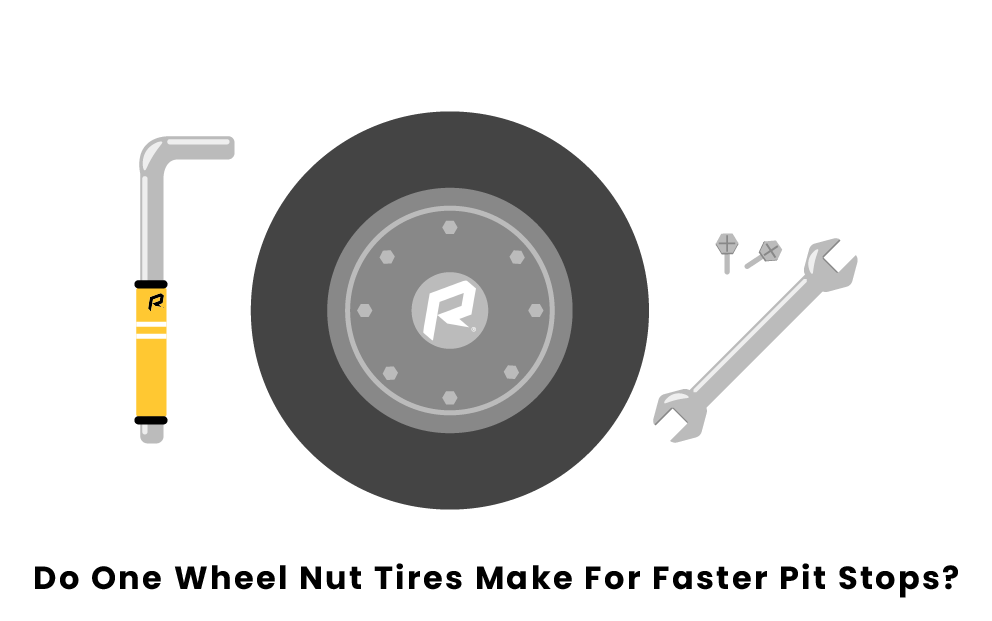 For the 2022 season, NASCAR transitioned from five lug nuts per wheel to a single lug nut per wheel on each of its cars.

NASCAR decided to implement the one-lug nut design due to the introduction of new 18-inch aluminum wheels. Compared to the current wheels on the race cars, the new wheels are three inches larger in diameter. With larger wheels, using one lug nut versus five increases the stability and durability of the wheels. Using a single lug nut greatly reduces the risk of improperly securing the wheel to the hub. NASCAR engineers determined that the risk of failure while using five lug nuts on the new aluminum wheels was unacceptably high, and so they recommended the change to a single-lug design.

By switching to single-lug wheels, teams are able to make faster pit stops. The new tires only take about 0.5 seconds to remove, compared to the Gen-6, which required between 0.8 and 1 second. As a result, the average duration of pit stops has been reduced to 10 seconds. The ability of pit guns to remove one lug nut faster than the current five lug nut design is due to the higher torque of the single lug nut. However, since more threads are required to attach the larger single lug nut, the pit gun will need to remain on the wheel for longer. The time required to change a wheel has been reduced, and the average total pit stop time has decreased.

With the change in tires and the number of lug nuts per wheel, pit stop procedures have not significantly changed. Prior to the 2022 season, John Probst, NASCAR senior vice president of innovation and racing development, ensured fans that there would not be any large changes to the way the pit stop crew carried out their roles, and he has been proven correct. Probst expressed that crew members will still jump over the walls and need to rush from the right side of the car to the left to change all four tires, as the pit stops during the 2022 season have shown.

Support for the Change

After the change to single-lug nut wheels was announced, NASCAR received positive support from the majority of the Cup Series teams. However, some teams were resistant to the change because of their earned competitive advantage from effectively training crews to change five lug nuts. Most teams have found success and competitive advantage using the new single-lug wheels. One unforeseen complication has been an increase in loose tire penalties. Unlike in a five-lug design, where one loose nut will not cause the wheel to immediately come loose, if the single-lug nut is loose or not properly seated, the wheel quickly becomes loose itself. Tire changers have become extra vigilant lest their teams incur suspensions and fines.

Other Changes Due to the Single Lug Nut

While the switch to a single lug nut was a significant change, there are several other changes in the sport that have resulted from the switch. One change is the easing of penalties for lug-nut violations. While lug-nut violations typically resulted in an automatic four-week suspension for the crew chief, tire changer, and jack operator, NASCAR officials now consider whether a dangerous situation was created when assessing such penalties.

Another change is that the five-lug nut design required the nuts to be glued to the wheels. The switch prevents teams from having to do this and reduces the preparation time needed before a race.

What is a lug nut?

A lug nut is a metal piece used to fasten a wheel to a car. More specifically, the lug nut secures the hub of the wheel to the studs on the axle of the car. This helps to center the wheel on the axle and hold it in place. Lug nuts are usually made of chrome-plated steel but can also be made of titanium or anodized aluminum which are more lightweight than the steel ones.

How do you tighten a lug nut?

To tighten a lug nut, the tools needed include a socket wrench and a torque wrench. However, pit crew members use a power tool called an impact wrench that requires less effort to tighten lug nuts. When using the traditional tools, the lug nut is placed on the wheel and initially tightened with the socket wrench. Following this method, the torque wrench is used to finish tightening the nut until the wrench produces a clicking noise, signaling that the nut is tightened all the way.

What is a lug-nut penalty?

After a NASCAR race, cars are subjected to a lug-nut check to ensure that all of their lug nuts are safely secured. A lug-nut penalty is assessed to a team when a lug nut on a car’s wheel is not securely fastened. The maximum penalty for a lug-nut penalty is a $10,000 fine for the team and a four-week suspension for the crew chief, tire changer, and jack operator. NASCAR considers whether a dangerous situation was created as a result of the loose lug nut when determining the severity of the penalty.

Is glue important for lug nuts?

When wheels had five lug nuts, glue was an essential part of the wheel’s functionality. Before each race, the lug nuts were glued to the wheel, and the glue was the only thing keeping the lug nuts in place. Furthermore, the amount of glue used is crucial when securing the lug nuts. The glue should not be too dry or too sticky. In addition, the timing of when the glue is applied is also important depending on the given weather conditions.

Pages Related to Do One Wheel Nut Tires Make For Faster Pit Stops?