Do NASCAR Cars Need To Be The Same Shape? 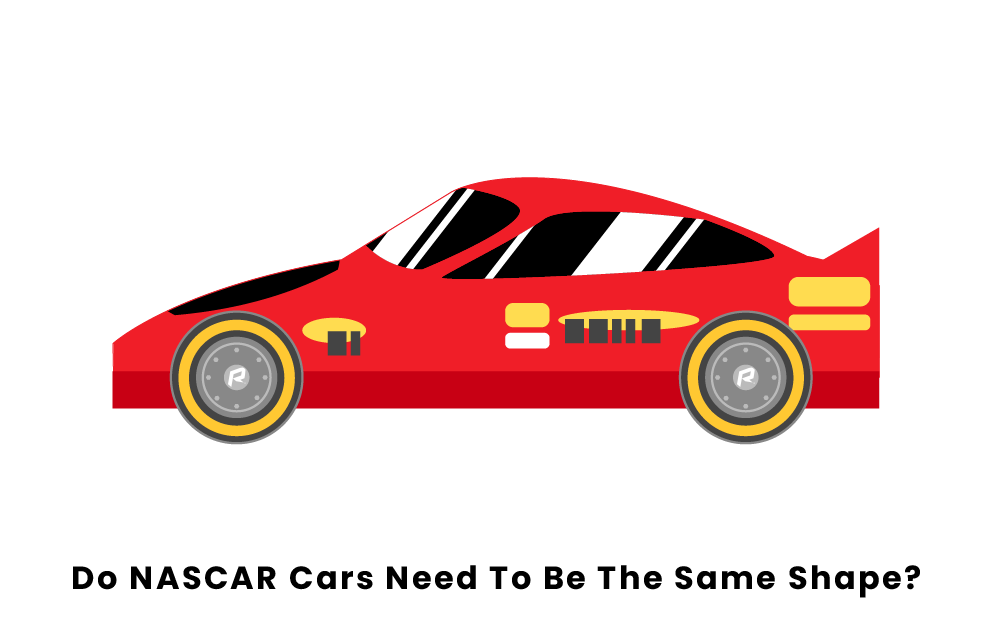 In general, when watching NASCAR races and looking at the cars, they all look the same. NASCAR has very strict rules and regulations that force the cars to be extremely similar, but depending on which company manufactures the car, they can still have some slight differences. The basic shell of the car, the tires, the suspension and more have to all be the same for safety and fairness purposes, but the outer layer of the car can be different.

For the casual fan, it will be extremely difficult to notice the differences between two cars, but each car can be slightly customized.

Why do all NASCAR cars look the same?

In general, most NASCAR cars look the same because it has been determined that their mold has the greatest aerodynamic ability. This means that the cars will be able to race with the least amount of air resistance possible so the car can travel as quickly as possible. The manufacturers are always looking to improve their cars and find ways to give themselves advantages, so any small, legal change that can improve their car will be made to each of their cars.

Why do NASCAR manufacturers change their cars?

The biggest reason that companies make slight changes to the cars is because they believe that those changes will help with the aerodynamics of the car and it will allow for the car to go faster. Because the cars are going so fast, the slightest change to its outer shell can either help or hurt its aerodynamics and can drastically change the speed the car is able to go.

The most common areas for the manufacturers to change are the nose of the car, the fender of the car, and the rear end of the car. These three locations have the most profound impact on determining the aerodynamics of the car and will help or hurt the car's ability to go faster during a race. Manufacturers spend a lot of time and money on researching modifications that will give them an advantage over other cars.

Another reason that the cars may be different is if the manufacturer is looking for a car that does better in short stretches or long distances. Some car manufacturers prefer to have their cars excel in certain aspects of the race, and it will result in them tweaking the design of their car in order to be the best in that specific aspect. Car changes made for this purpose are typically to reliant on the type of racetrack they will be competing on. Some designs do better when the racetrack is much longer, and some do better with a shorter track. Almost every variable of the race changes an aspect of the car and helps manufacturers to determine the design of the car and what slight changes will be made to best accommodate for those variables.

Why does NASCAR require certain parts of the car be the same?

NASCAR requires that very specific parts of the cars be the same because they normally have to do with safety. For example, the cage that is constructed, which makes the basic size and shape of the car, is required to follow extremely strict rules and regulations because it is a very important part of the car if there were to be a crash. In the event of a crash, a poorly constructed cage can increase the likelihood of injury to the driver.

Are NASCAR cars the same as normal cars?

NASCAR cars and street legal cars are not exactly the same, but they do have a lot of similarities. For example, NASCAR cars are not made with headlights because they really have no need for them. However, to try and make the race look like it is normal cars, they paint headlight decals on the car that really have no true purpose. Since NASCAR cars are not driven on the road, they also do not have mirrors or turn signals, and they are capable of travelling at much higher speeds than would be legal.

NASCAR cars have not always looked the way that they look now. They have adapted and changed as the research into aerodynamics improves. Many major advancements in technology have allowed for the cars to be made to go faster and improve aerodynamics, so over time the cars have changed in shape and size.

Are all NASCAR cars made by the same company?

Pages Related to Do NASCAR Cars Need To Be The Same Shape?