DO NASCAR Cars Have Speedometers? 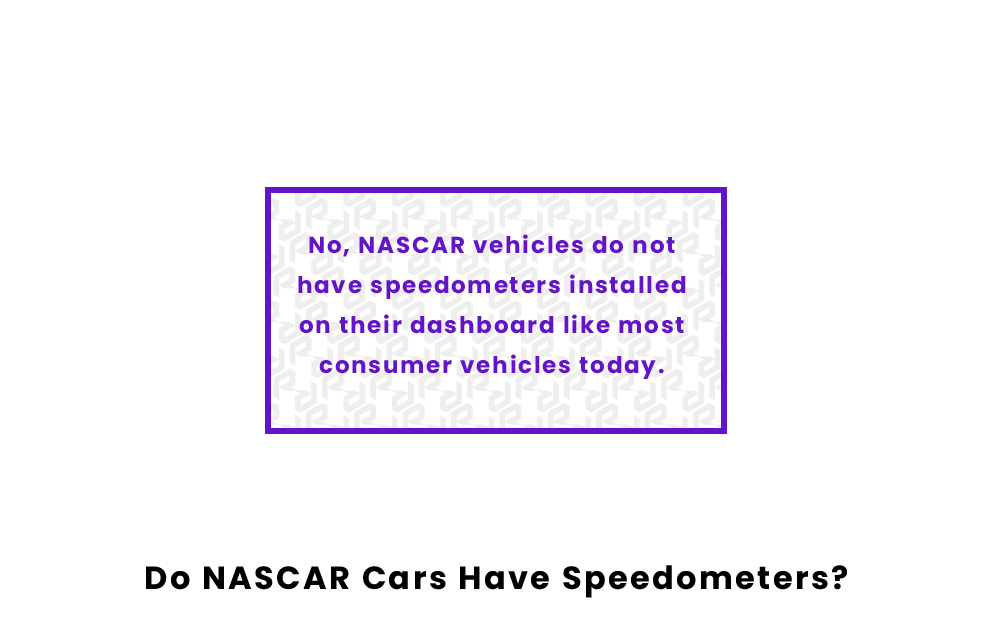 NASCAR is a high-speed motorsport in which cars can travel upwards of 200 miles per hour during races. Watching cars travel at such high speeds makes many fans wonder if NASCAR cars have speedometers. The simple answer is no, NASCAR vehicles do not have speedometers installed on their dashboard like most consumer vehicles today.

NASCAR drivers require an intense focus on their driving and surroundings, all while maintaining communication with the crew and making adjustments. With such little time to make decisions, NASCAR teams must only provide their drivers with the most important information on their dashboards. For this reason, NASCAR dashboards do not display speed in the form of a speedometer but instead include digital readings for RPM, lap time, oil pressure, and more.

Why do NASCAR cars not use a speedometer?

Most everyday drivers would assume that NASCAR drivers need a speedometer so they can monitor how fast they're traveling around the track, however this is not the case. On the contrary, NASCAR drivers don't need a speedometer during races because they are worried about monitoring other pressing factors throughout the race. Normal fuel gauges also wouldn't work in NASCAR vehicles due to the nature of the sport's steep angles and car's bouncing around the track. NASCAR doesn't allow speedometers and requires that all drivers use the same digital dashboard implemented in 2015.

During a competitive race, it is essential that NASCAR drivers remain focused on their driving and response time. When drivers are traveling at such high speeds, one of the last things they worry about is how fast they're actually going. NASCAR teams don't want drivers to become distracted by unnecessary readings on the dashboard, so NASCAR has implemented a simplified digital dashboard instead. The digital dashboard is supposed to present information more accurately and responsively, while also simplifying how readings are presented to drivers during races.

While it may seem confusing to fans, it actually makes sense that drivers typically aren't aware of the precise speeds they travel at during races. Once you reach speeds upwards of 150 miles per hour, decision making becomes increasingly more important; a small error at such high speeds could result in a catastrophic wreckage. NASCAR drivers are tasked with controlling the vehicle and adjusting to situations throughout the race, while the crew chief remotely monitors other factors such as speed and performance then communicates information to the driver as needed.

What is on a NASCAR dashboard?

If NASCAR vehicles don't have speedometers on their dashboards, then what do they have? The dashboard on all NASCAR cars was changed in 2015 from using analog gauges to utilizing the current digital display that can be fully customized by each team. The digital displays on NASCAR dashboards can show RPM, lap time, water temperature, water pressure, oil temperature, oil pressure, fuel pressure, voltage, and more. It can display data on sixteen different presets in the form of numbers, graphs, color scales, or digital imitations of old school gauges. However, one thing that NASCAR's digital dashboards don't show is the car's actual speed in miles per hour!

Pages Related to DO NASCAR Cars Have Speedometers?