Are NASCAR Drivers Allowed To Hit Each Other? 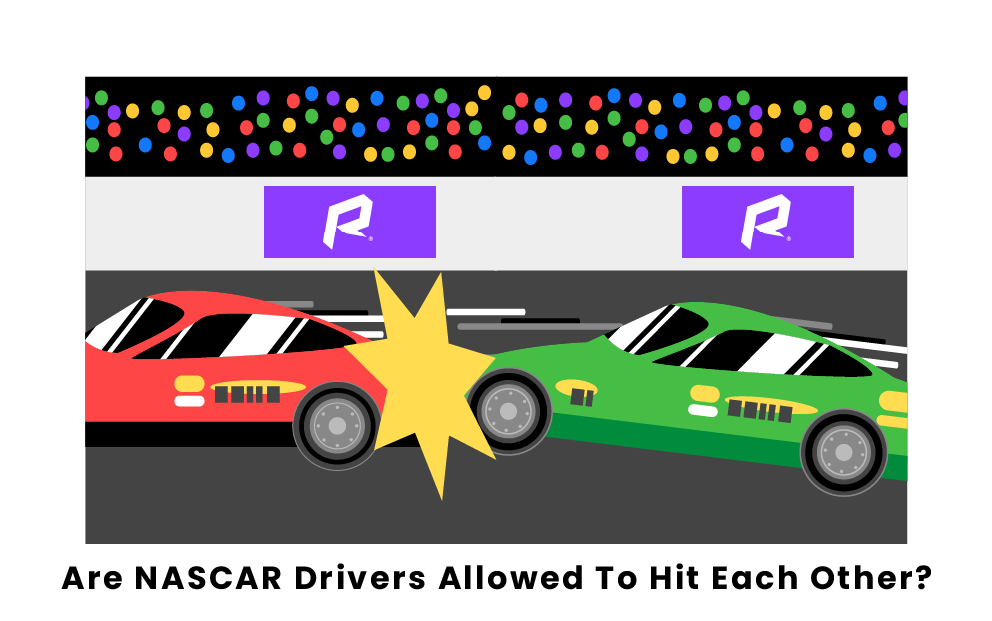 While NASCAR fans enjoy the thrill of wrecks, drivers undoubtedly find them less appealing. Drivers hitting other drivers has been a common practice since the sport’s inception, and impacts can drastically affect a driver or group of driver’s race results. Indeed, last lap wrecks still happen frequently and are a byproduct of competition in a sport filled with pride and emotion. But what are the rules surrounding NASCAR impacts? Are drivers protected from being hit, or is hitting other drivers encouraged?

NASCAR does not officially release its rulebook to the general public. However, the drivers, teams, and fans all collectively offer insight into the specific rules regarding whether drivers are allowed to hit each other during a race. Plainly, NASCAR drivers are not allowed to hit each other intentionally with the goal of causing an accident to occur. To some, the rules are quite relaxed, in that contact between drivers rarely results in punishment. Indeed, NASCAR officials have difficulty ruling on drivers who hit one another, as it is often unclear what was an accident and what was intentional. Theoretically, drivers should never be allowed to hit each other intentionally, but the reality is that drivers can often get away with such actions without penalty.

This has been the case for many years, and the perceivably relaxed rulings on hitting have sparked debates within the NASCAR community. In other motorsports, like Formula 1, the concept of hitting other drivers is largely frowned upon. In contrast, NASCAR fans find close contact between racers as an inevitable and entertaining aspect of the sport.

Of course, NASCAR’s rules are in place to prevent serious injury and to keep drivers safe. That being said, contact will inevitably remain an aspect of the sport. To some drivers, bumping and hitting are simply part of the game and a necessity to keep the race competitive. Maneuvers like bump drafting are commonplace throughout the sport and involve some degree of risk to pull off, both for the drafter and the driver being hit. The maneuver involves one driver drafting another, where the driver behind bumps into the driver in front to push them forward and continue the draft. While this maneuver is considered fair by many, others take a strong stance of objection, citing how the move is extremely dangerous and could cause a fatal crash.

Therein lies the fundamental problem with the question at hand. While hitting other drivers could be seen as common practice, the NASCAR rules leave little in the way of a clear method to distinguish a purposeful hit from an accidental one. An important question still remains: Is risking the lives of other drivers for a competitive advantage justifiable? Is hitting other drivers an acceptable practice?

Why Do NASCAR Drivers Hit Each Other?

Sports can be dangerous, and NASCAR is no exception. Because of the drivers’ competitive nature, they take risks, doing anything they can within the limits of the rules to gain an advantage over their opponents. In NASCAR, it is unclear what exactly qualifies as permissible hitting or bumping behavior. However, most, if not all athletes would scoff at something that endangered the life of someone else. Therefore, hitting might be commonplace in the sport of NASCAR, but that does not necessarily make the practice an acceptable one.

NASCAR drivers are highly competitive, and tempers often run high at the end of races. Infamously, many feuds that began on the track have continued in the pit lane following a race, with the conflicting drivers engaging in heated words and sometimes even hand-to-hand combat. Even the biggest stars let their tempers get the best of them at times, as drivers such as Greg Biffle, Jeff Burton, Kurt Busch, Kevin Harvick, Jimmy Spencer, Jeff Gordon, Tony Stewart, Joey Logano, Clint Bowyer, and Cale Yarborough have all thrown punches following particularly frustrating races. Although fighting is not encouraged, NASCAR does tacitly allow it, and even uses footage of fistfights between drivers in their social media posts and promotional materials. In the event of a particularly nasty conflict, NASCAR officials stage a mediation session between the two drivers, typically resolving the situation without issuing a penalty.

Is bumping legal in NASCAR?

It is technically illegal in NASCAR for a driver to intentionally hit another car. However, incidental contact is extremely common in the sport. Bumping another car will usually go unpunished unless it is especially egregious. Officials understand that drivers operate within an unofficial code of conduct and generally allow drivers to exact revenge on the track, as long as the retaliation is appropriate based on the original offense.

Why do NASCAR drivers bump each other?

NASCAR drivers bump each other for several reasons, including transferring momentum to another car and defending their position. On a restart or in the middle of a straightaway, a NASCAR driver will often intentionally bump into the car in front of them, transferring some of their own momentum and increasing the front car’s speed. Such a bump is performed to gain a strategic and aerodynamic advantage or to help a friend. Alternatively, a car can bump a car beside it, in a maneuver called bump drafting. This technique removes the other car’s aerodynamic advantage, helping the bump-drafting car defend its position on the track.

Pages Related to Are NASCAR Drivers Allowed To Hit Each Other?