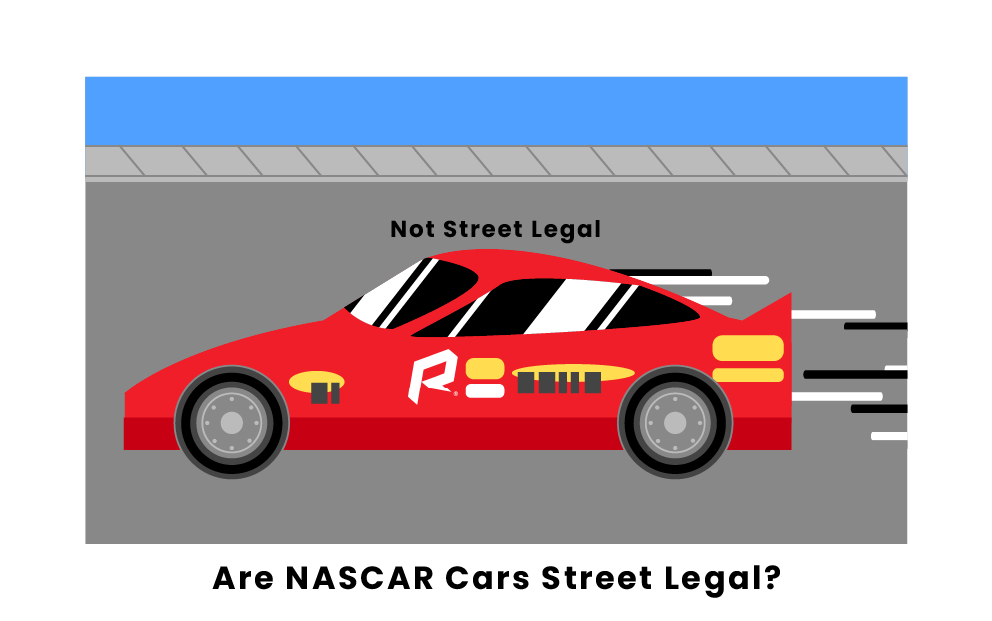 In the early days of auto racing, these cars were, in fact, “stock cars” and would be completely stock from the factory. Some racers would even drive their cars to the racing events. Today, the sport is much different, as race cars aren’t really stock anymore and only resemble the shapes of their showroom counterparts.

The Department of Transportation (DOT) has strict guidelines and regulations that all automobiles operating on the road must follow. There are no lighting systems in these cars, meaning they have no night visibility and an inability to use turn/brake signals. Instead of window glass, lightweight Lexan is used, which is not nearly as protective as regular glass. Additionally, the engines do not have any mufflers, meaning they produce an extremely loud and unpleasant noise and do not meet emission standards. For these reasons, NASCAR cars do not meet any of the safety standards set by the DOT.

These cars are designed for racing and would be extremely impractical to drive around on the streets. They are simply designed to race, and it would take a lot of modifications to get one of these NASCAR cars to become street legal.

Making a NASCAR race car street legal would take a lot of money, work, and dedication. However, there are at least two examples of NASCAR cars that have been made street legal.

The first is a 2008 #5 Mark Martin Conquest car. This car was not built from a NASCAR chassis. Instead, it was hand built based on a NASCAR-style tube chassis. The car was estimated to cost around $100,000 to construct and took 2,000 man hours to build. The car has been modified to abide by all traffic laws and regulations and has doors so passengers can get in and out freely. This car was priced at $69,000 and set to be auctioned.

Another example of a street-legal NASCAR car was actually built from an original NASCAR chassis. It was originally bodied as Chevrolet, but the owner attached the Ford body during the restoration process. The engine is the exact same as the original car. However, the clutch and gearing have been heavily modified to meet the rules of the road.

What is a stock car?

A stock car is a purpose-built race car that is designed to resemble a consumer automobile. In the early days of NASCAR, the race cars were truly stock, that is, straight out of a dealer’s inventory. Over time, the race cars used in NASCAR became more heavily modified. Today, NASCAR’s race cars are still called stock cars even though they are built by an independent manufacturer and have no parts in common with the road cars with which they share nameplates.

What makes a NASCAR race car not street legal?

Can you buy a NASCAR race car?

You can buy a NASCAR race car. Although some race cars get wrecked and destroyed, most are still in good shape when teams are finished with them. To recoup some of the cost of buying a new race car, Cup Series teams sell their old cars to other teams, typically those competing in the Xfinity and ARCA series. A NASCAR race car costs between $20,000 and $100,000, depending on age and condition. Although they are available for purchase, no NASCAR race cars are legal to drive on public roads.