Are All NASCAR Engines The Same? 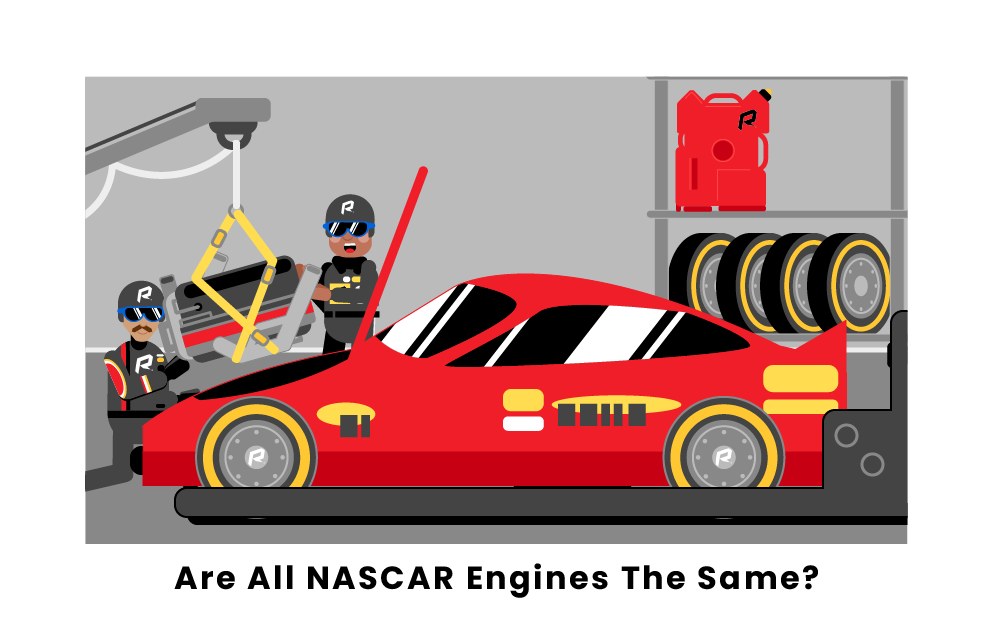 In NASCAR, as in any other type of motorsport series, the engine is perhaps the most important part of the car and the most expensive piece of equipment in the sport. Teams lease engines from manufacturers for over $2 million per car for the entire season. It is impossible to be successful with a bad engine, which makes teams and manufacturers spend lots of time and money on the research and development of the best engines possible. In NASCAR's Cup Series, its premier racing car series, there are three different engine suppliers today: Toyota, Chevrolet, and Ford. This means that all NASCAR engines are not the same. However, they are all quite similar, given that they have to follow the same set of rules.

All three of the engine manufacturers are also notable consumer automobile manufacturers. Toyota, Chevrolet, and Ford all use NASCAR as a place to develop and showcase innovations that may be implemented into their everyday cars bought by their customers. Also, NASCAR is a way to do some marketing and expand their brand, especially when there is some competition involved. If all engines were exactly the same, there would be no reason for all three companies to be involved in NASCAR, and the sport would suffer financially.

At the same time, NASCAR does not want a single manufacturer to be extremely dominant. Therefore, they must limit major differences between engines that could give one brand an advantage and ruin the competitive nature of the sport. In fact, the Manufacturer's Championship is a big part of the NASCAR season, with Toyota, Chevrolet, and Ford competing to take the trophy home every year.

NASCAR ensures that competitions are competitive and entertaining for fans by creating regulations that all teams must follow. Each version of the NASCAR race car designed to comply with a new set of regulations is called a generation. 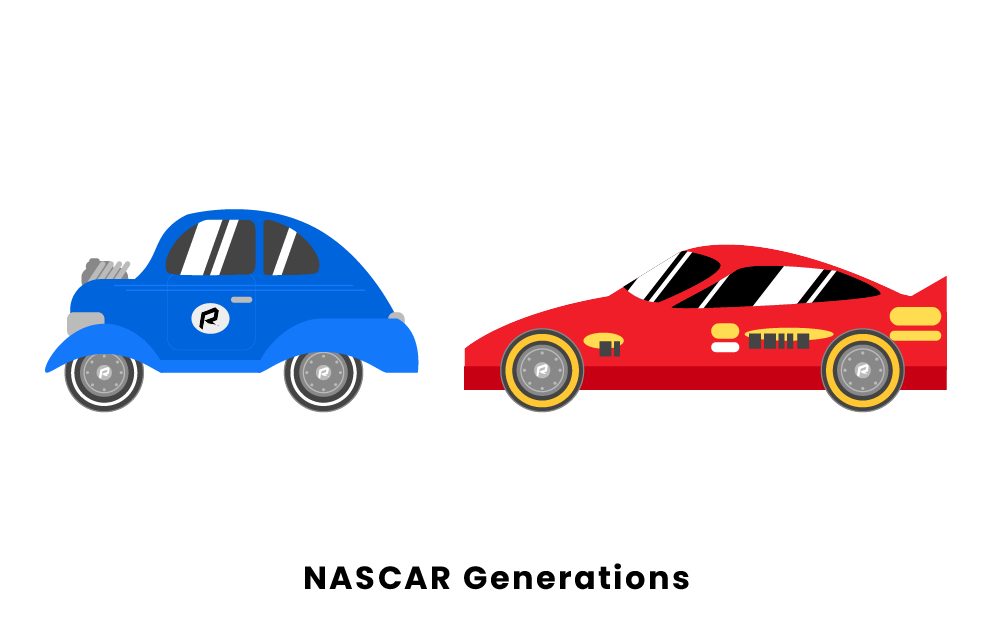 NASCAR cars come in generations. All cars must follow the same specifications and regulations, which, when changed, create a new generation. Currently, NASCAR cars are Generation 7 cars, which debuted in 2022. The Gen-7 cars are brand new, so the debut of the next generation (Gen-8) is likely still several years away.

The specifications that Toyota, Ford, and Chevrolet must follow when designing their NASCAR engines did not significantly change following the transition to the Gen-7 race car. Naturally, the three engine suppliers are part of the discussion in developing the next generations of NASCAR cars and their engines.

Although the specifics of engine rules haven’t changed greatly for the Gen-7 cars, the expectation is that future NASCAR engines will have more electrical components than the current version, meaning there will be hybrid engines. Hybrid engines are powered by a combination of fossil fuels like gas and electric energy. Notably, all three engine suppliers have been investing in extensive research into electrical engines over the last few years and sell cars with hybrid and electric engines. Toyota, Ford, and Chevrolet all make engines for NASCAR that are more similar to what they sell to their customers and to what the future of cars will look like. In the meantime, all three manufacturers will continue employing traditional, internal combustion, naturally aspirated 5.86 liter V8 pushrod engines.

In addition, adding a hybrid engine to the sport might even attract more car manufacturers looking to showcase their own work in hybrid and electric technology. Adding new known car companies that supply engines would increase competitiveness, which is always good for the sport and fun for the fans.

While the engine itself will change, the competition between the three companies that supply them to NASCAR won't. Engines will still all have to follow the same rules, but will not be exactly the same, as Ford, Toyota, and Chevrolet will each design their own NASCAR hybrid engines to supply to the teams.

NASCAR Xfinity Series engines are very similar to NASCAR Cup Series engines, with a few small distinctions. While the engines in both series are 358 cubic inch pushrod V8, their power output is restricted at different levels. Power output on NASCAR Xfinity Series cars is limited to 650 horsepower, unlike NASCAR Cup Series cars that are limited to 670 horsepower on most tracks and 510 horsepower on superspeedways.

The engines used in Craftsman Truck Series race trucks are built to the same specifications as those used in the Cup and Xfinity series. Unlike the top two series, all of the engines used in the Truck Series are made by a single manufacturer, Ilmor, a Michigan-based builder of marine and racing engines. Although teams run nameplates representing their respective manufacturers of Ford, Chevrolet, or Toyota, all of the engines are manufactured by a single-source supplier in an effort to ameliorate costs in the developmental series.

What engines do NASCAR cars use?

NASCAR cars use naturally aspirated engines from three suppliers: Chevrolet, Ford, and Toyota. Engines used in NASCAR from these manufacturers are all eight-cylinder engines tuned by individual teams for peak performance.

Do all NASCARs have the same engine?

All NASCARs do not have the same engine. Although each NASCAR engine must be built to the same specifications and standards, the three engine manufacturers (Ford, Chevrolet, and Toyota) each design their own models. Ford cars use the FR9 engine, Chevrolets run the R07, and Toyotas are equipped with the TRD engine. All three models are 5.86 liter V8 pushrod engines.

NASCAR engines are made by three companies: Ford, Chevrolet, and Toyota. These manufacturers are also popular consumer automobile brands. Each company makes its own model of NASCAR engine, but they all must follow the same specifications set by NASCAR.

Pages Related to Are All NASCAR Engines The Same?