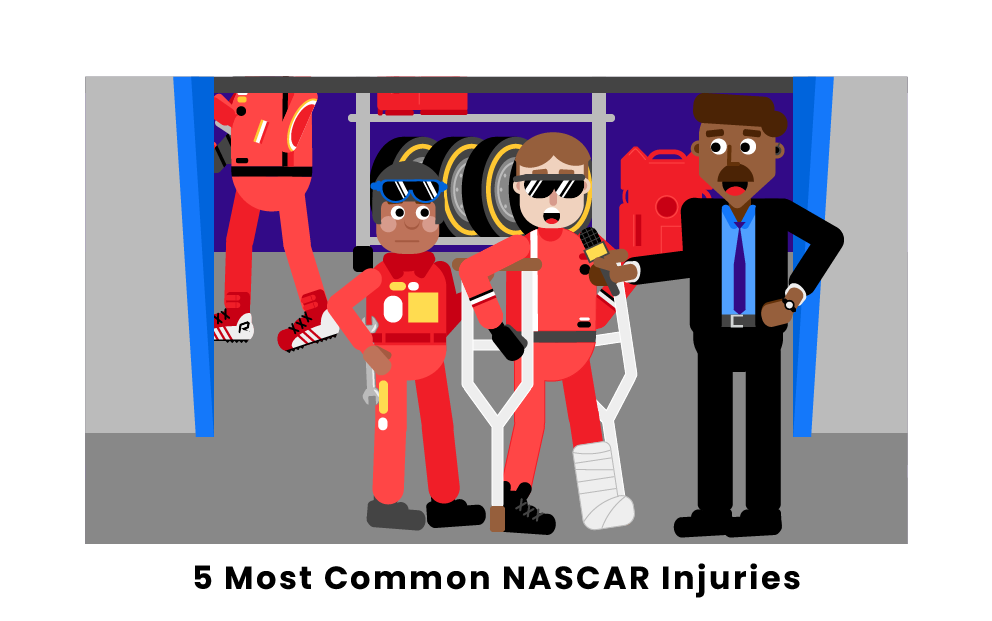 Just like any athlete, NASCAR drivers can sustain injuries as a result of the demands and impact that competition places on their bodies. Have you ever wondered what are the most common NASCAR injuries? Keep reading to find a list of the five most common injuries in NASCAR, along with descriptions and how they occur.

What are the Most Common NASCAR Injuries?

The most common injuries that athletes get in NASCAR are upper extremity fractures. A lot of drivers will fracture their shoulders and arms from smaller crashes, which happen much more frequently than large, race-ending crashes. Drivers will primarily get distal radius fractures and scaphoid fractures. Both of these bones are located in or around your wrists. The fractures that drivers get tend to mostly be located in their arms, and they range from their fingers all the way up to their shoulders. Drivers could avoid injuries like these by not locking their hands on the steering wheel.

The second most common injury suffered in NASCAR is lower back strains. Drivers tend to get this type of injury from crashes, of course, but also from strenuous driving. Even in a sport where the athlete remains seated and in a car, it is important for them to stretch and stay loose. Stretching will help athletes avoid lower back strains as much as possible. Lower back strains are little tears in the muscles and ligaments in and around the lower back. These injuries usually stem from tight hips, hamstrings, and quads. The challenge in avoiding lower back strains is that people will naturally get tight backs and hamstrings from sitting in a car for long periods of time, which is exactly what NASCAR drivers do.

Another common injury in NASCAR is tendonitis. NASCAR drivers get tendonitis in many areas of their body, depending on how the injury occurs. Tendonitis is the inflammation of tendons causing pain and stiffness in the area of the injury. Drivers gripping the steering wheel with excessive force puts a lot of strain on the tendons in their hands, wrists, elbows, shoulders, and necks. Drivers also tend to get tendonitis in their feet, ankles, and knees from the force they put on the gas and brake pedals in their cars. NASCAR drivers who do get tendonitis try to recover by letting the injured body part rest for a while.

NASCAR drivers also commonly get plantar fasciitis from the force they put on their gas and brake pedals. Plantar fasciitis is a painful injury consisting of inflammation of the plantar fasciitis band, which is a thick band that runs from your calf down to your foot. This injury is caused by a similar motion repeated over and over, like pushing down on a gas pedal throughout a race and a NASCAR season. Wearing correctly fitting footwear is important for drivers to stay comfortable and healthy during their long drives around the track. Plantar fasciitis takes a while to heal, as well, so drivers try to stay on top of taking care of their bodies.

Another very common injury in NASCAR is a concussion. While this injury is very common across the sport, it actually doesn’t happen as often as amateur fans might think. Concussions in NASCAR tend to happen only in crashes, and even then, they don’t happen in every crash. Concussions and traumatic injuries have decreased over the years, as more safety protocols have been put in place, but they still happen occasionally, and these injuries are frightening for everyone involved. NASCAR is still working to decrease the number of head injuries in their sport.

Here is a list of other injuries that are commonly sustained in NASCAR:

How do NASCAR drivers get injured?

There are a number of ways NASCAR drivers can get injured, most obviously as a result of wrecks or crashes during a race. Due to the high speeds of NASCAR cars, crashes are common, and these can often be intense and violent. Abrupt stops, impacts from other cars, and even the force of rollovers or impacts with barriers can all cause injuries to the head, neck, or upper body, among many other types of injury.

How do NASCAR drivers avoid injury?

There are a number of precautions and devices that NASCAR employs to keep its drivers safe from injury. Like in other motorsports, such as Formula 1, NASCAR vehicles use HANS (Head and Neck Support) Devices, which keep a driver’s upper body and head secure. NASCAR tracks also contain energy-absorbing SAFER barriers that prevent major damage or injury from cars. These safety systems were largely improved and adopted after the tragic death of Dale Earnhardt Sr. during the final lap of the 2001 Daytona 500.