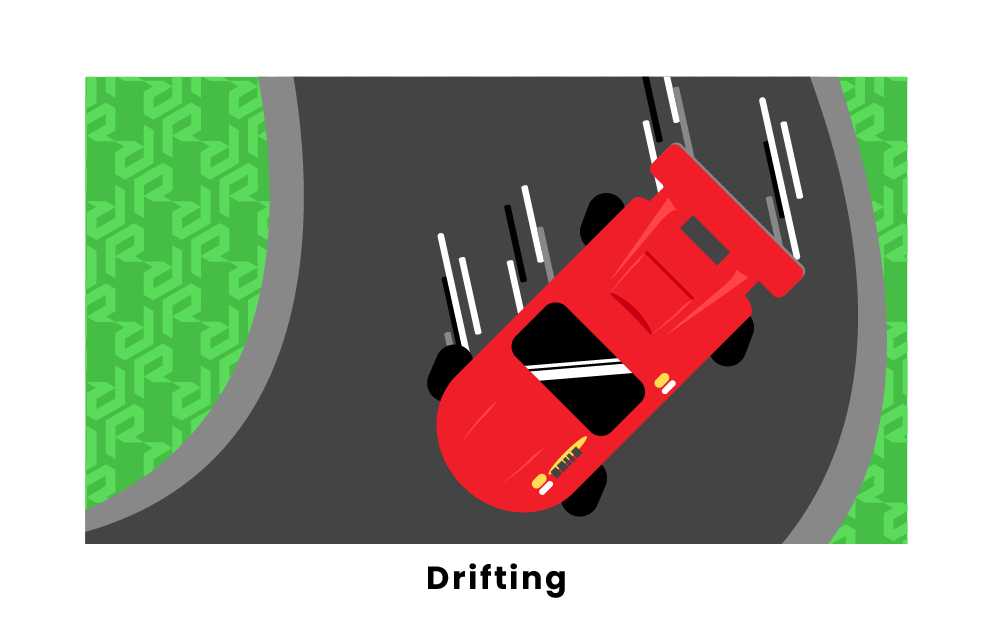 Drifting is a driving technique where drivers use their car’s throttle, brakes, clutch, gear shifting, and steering input to glide through turns, keeping the car in a state of oversteer as they shift the balance of the car back and forth to make faster and more abrupt turns. In order to drift, drivers must coordinate the amount of countersteering while simultaneously modulating the throttle and brakes. Drivers will often attempt to adhere to the preexisting road lines while also maintaining extreme slip angles.

Legends about the origins of drifting state that the sport began in Japan during the 1960s, where drivers would often slide their cars through tight, dangerous turns on mountain roads. By the 1990s, drifting was commonplace in Japanese motor racing, and, in 2000, the first D1 Grand Prix (D1GP) drifting competition was held in Japan. Afterward, drifting migrated to the United States and became part of the car culture in places like Southern California.

In order to drift successfully, cars with rear-wheel-drive are essential. These rear-wheel-drive cars come in various models; cars imported from Japan are often preferred, including models such as the Nissan 240SX and 350Z, the Mazda RX-7, and older Toyota Corollas. Drifting has become such a popular sport, both on tracks and off, that many car shops manufacture parts exclusively to improve a car’s ability to drift. Today, competitive drifting is managed by Formula Drift, which holds multiple annual drifting events. Other events, including the D1GP, are held across the globe in countries such as Indonesia, Malaysia, and Australia.

Drifting is a sport and driving technique where drivers attempt to slide through tight turns by manipulating the balance of their cars using a combination of their brakes, throttle, clutch, gear shift, and steering apparatus. Drifting began in Japan in the 1960s and quickly became a popular technique in Japanese motor racing before migrating to the United States. Nowadays, drifting is a popular but often illegal activity on public roadways. However, drifting is allowed on approved racetracks and in drifting competitions, such as the D1GP and Formula Drift events.

Where are the best places to go drifting?

What are the biggest drifting events in the world?

There are a number of notable drifting events that take place regularly around the globe. One of the biggest is arguably the D1 Grand Prix. Another well-known drifting event was the Prizefight in Ireland, held in 2017 at Mondello Park, which included over 80 drivers in its one-day event. Another UK event is the Max Drag and Drift, held annually on the Isle of Man, which is famous for its TT motorcycle races. The annual Australian Drifting Grand Prix is a multi-event circuit that features many locally-made V8s. Finally, one of the most storied drifting events of all is the annual Tokyo Drift, held at the Obaida racetrack in the Japanese capital.

Pages Related to What is Drifting?