What is Demolition Derby? 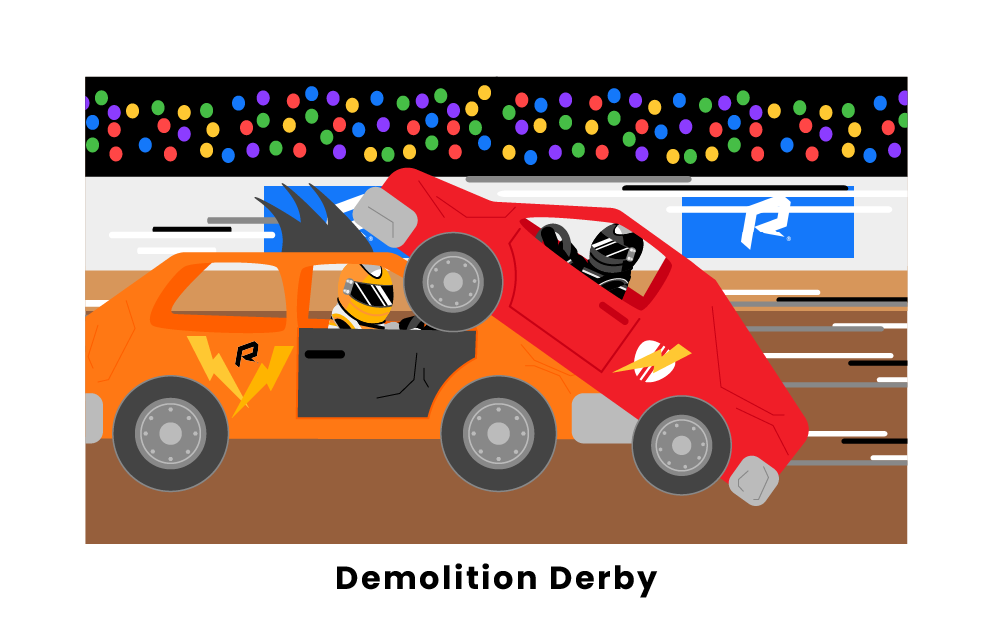 Demolition derby is a traditional motorsport event that brings families and communities together for smashing, crashing fun. In a demolition derby, drivers attempt to wreck one another and become the last one with a car that can move under its own power. Drivers wear helmets in the interest of safety; also, all glass is removed, and reinforcements are added to the cars.

Demolition derbies began in the 1950’s, soon after the dawn of stock car racing, when some race promoters realized that crashes got big reactions from fans and decided to throw events made up solely of crashes. The sport grew in popularity through the 1960’s and 1970’s, aided by prominent appearances on the sitcom Happy Days and ABC’s Wide World of Sports. The disappearance of the large American sedans typically used in demolition derbies in favor of the small, compact cars and SUVs found on today’s roads has contributed to the decline of the sport since its heyday in the 1970’s.

What is a demolition derby?

A demolition derby is a motorsport competition in which drivers deliberately crash into other vehicles with the intent of damaging and disabling them. Demolition derbies often consist of a series of heats. The last surviving vehicle at the end of each heat then competes in the feature event; the lone running vehicle at the end of the feature event is declared the winner of the derby. Demolition derbies are typically local events held at fairgrounds and tracks throughout the summer and autumn months.

Are there any cars banned from demolition derby?

Limousines and hearses of all makes and models are typically banned from demolition derbies as they are larger, heavier, and more durable than regular passenger cars. Infamously, Chrysler Imperials of model years 1964 through 1968 have historically been banned from demolition derbies as their legendary toughness made competition unfair. These Imperials were long, enormous cars featuring powerful engines built on unique truck chassis made of single bands of steel. Demolition derbies are sometimes run with school buses or excavating equipment, but in a separate class from the regular cars.

What are the biggest demolition derby events in the world?

The largest annual demolition derby event is Blizzard Bash, a three-day indoor competition among several classes held in Kansas, USA, that attracts over 300 drivers. Another event that bills itself as the world’s largest demolition derby is the Erie County Fair. Every August, in Hamburg, New York, USA, and regularly draws over 100 competitors. The largest documented demolition derby in the world was part of the Festival de la Galette de Sarrasin in Québec, Canada, in 2010, with 125 entrants competing simultaneously.

Pages Related to What is Demolition Derby?