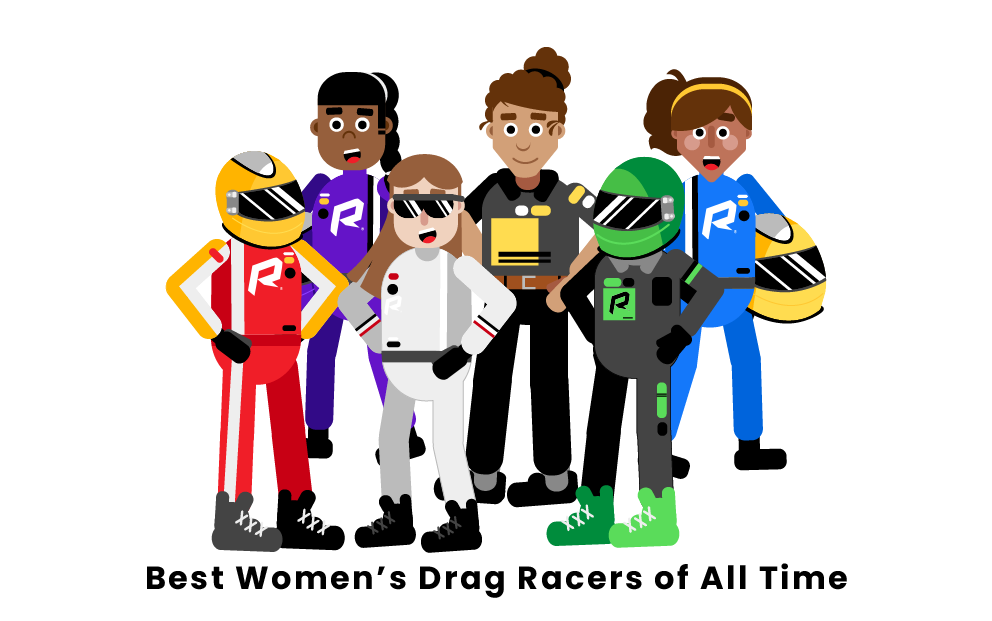 Across many motorsports disciplines, women compete directly with men. However, drag racing is unique in that women are a strong and significant minority, as compared to some other types of motorsport in which women are barely represented, if at all. Here is a list of the top six women’s drag racers of all time, from early pioneers to today's biggest stars.

Who are the best women’s drag racers of all time?

Shirley Muldowney, known as the “First Lady of Drag Racing,” was a true pioneer in the sport, serving as the prototype for every other woman who followed her path. Born in 1940, she grew up in Schenectady, New York, and started attending local drag races with her teenage boyfriend, racer Jack Muldowney.

The couple married, and Jack taught Shirley how to drive. She immediately took to drag racing, running in the stock category in local races.

Muldowney made history in 1965 when she became the first woman to earn a dragster license from the NHRA. She moved up to Top Gas, Funny Cars, then eventually Top Fuel, becoming the first person–man or woman–to win three NHRA World Championships with her third Top Fuel title in 1982.

Brittany Force made history in 2017 when she became only the second woman in history to win an NHRA Top Fuel World Championship title (Shirley Muldowney was the first). Daughter of drag racing legend John Force, Brittany grew up in Yorba Linda, California, where her two sisters, Courtney and Ashley, also competed in drag racing.

Brittany Force learned her craft at Frank Hawley’s Drag Racing School. After completing her education, she ran for three seasons in Super Comp, followed by another three in the Top Alcohol Dragster series. In her first season in Top Fuel, Force earned the 2013 NHRA Rookie of the Year award. She took home her historic title in the series only four years later. Sponsored by Monster Energy, Force is still competing today, with her eyes on another championship.

Erica Enders is the greatest and most successful female NHRA Pro Stock drag racer in history, and she is still racing today. Enders holds the records for most NHRA wins by a woman, currently at 38, as well as most wins in a season, for her eight-win season in 2015.

Growing up in Houston, Texas, Enders watched her father, Greg, compete in amateur drag races. With Greg’s permission, she joined the inaugural season of the NHRA Jr. Drag Racing League at age eight. (Her younger sister Courtney also competed in the series.)

Enders raced Super Gas dragsters, then moved up to Pro Stock, earning Rookie of the Year in 2005. She won her first Pro Stock World Championship in 2014, defending her title the next year. Enders took two more titles in 2019 and 2020, and she is still competing.

Courtney Force is known for her dominance in Funny Car and is the youngest daughter of drag racing legend John Force. Courtney grew up racing and hanging out at the race track like her sisters Brittany and Ashley. According to her father, young Courtney exhibited the most enthusiasm for racing among her sisters, especially showing love for funny cars.

Courtney Force started racing in the Super Comp series before moving to Top Alcohol. In 2012, she moved to the NHRA Funny Car series, making her debut at Winternationals. Courtney’s best season was 2018, in which she won four races and finished sixth in points. She announced in 2019 that she was retiring from racing to focus on her family but would continue working for John Force Racing in a support role.

Born in 1969, Fry grew up in Santa Rosa, California, where she started working on cars at age seven and drag raced as a teenager with her father, Ron. She raced in the Top Alcohol and Super Street series in the 1980s and early 90s.

After taking a decade off, Fry returned to drag racing in the NHRA Heritage Series, where she won the world championship in 2017 and 2018. Although not officially retired, Fry has not raced since 2019.

One of the most popular women in drag racing today, Alexis DeJoria, made a spectacular return to competition in 2020 after retiring three years earlier.

DeJoria grew up in Venice Beach, California. She adored sports cars but did not begin drag racing until age 36 when she started competing in the NHRA Super Gas series. DeJoria excelled, moving up to Super Comp, where she got her first win within eight months of her debut at the 2005 Nationals in Fontana, California.

She continued racing Top Alcohol and Nitro Funny Cars, first for her own team and then Kalitta Motorsports. After three years off, DeJoria has made a strong return to form, winning Bristol in 2021 and finishing that season a career-high sixth in points.

Who is the best women’s drag racer of all time?

Shirley Muldowney is the best women’s drag racer of all time. Not only was she the first woman to ever obtain a drag racing license from the NHRA, but she also became the first woman to win a Top Fuel World Championship. She repeated that feat two more times, becoming the first person to win the title three times.

Muldowney’s career lasted four decades, during which she won more Top Fuel races than any other woman in history, earning the nickname “First Lady of Drag Racing.”

What women’s drag racer has won the most NHRA events all time?

Sampey’s 45 wins are a record for most all-time wins for a woman across all motorsports. This feat also ties the record for most wins in the Pro Stock Motorcycle series held by Dave Schultz.

Who was the first female drag racer to reach 300mph?

Rachelle Splatt was the first female drag racer to reach 300 mph. The Australian set the record while driving for the Luxor Casino team in the NHRA Top Fuel series during the 1994 season. On March 5, 1994, Splatt made a qualifying run at Houston Raceway Park (now Royal Purple Raceway) as part of the Slick 50 NHRA Nationals. She ran the quarter-mile in a mere 4.88 seconds, topping out at exactly 300 mph.