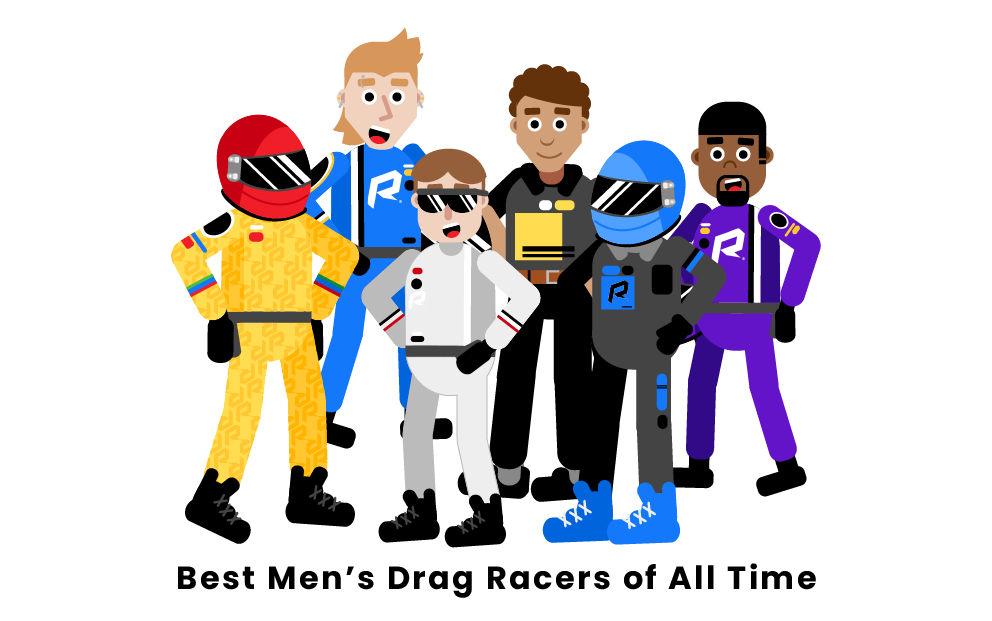 Drag racing is an incredibly popular racing sport beloved by many and filled with numerous talented competitors. In a sport where typically two drivers are racing head-to-head at one time, the competition gets fierce, and the best drivers naturally thrive. This list will highlight the top six men's drag racers of all time.

Who are the best men’s drag racers of all time?

Don Garlits, commonly known as "Big Daddy," is one of the biggest names in all of drag racing history, and for a good reason too. As a legend of the sport, his resume is no stranger to accolades, as evidenced by the 144 national event wins and 17 World Championship titles he holds to his name. He demolished his competition on the track, but he also set numerous milestones for the sport, including being the first drag racing member of the Motorsports Hall of Fame after being inducted as part of the 1989 class.

Bob Glidden had a 25-year-long career that was packed with impressive victories, numerous accolades, and unforgettable moments. Glidden was able to amass 85 NHRA event victories over his time on the track and, even more impressively, racked up another ten NHRA Season Championship titles over the span of his extraordinary career. Glidden was voted the number four overall driver on the list of Top 50 racers from NHRA's first 50 years in 2000 and was later inducted into the International Motorsports Hall of Fame as a part of the 2004 Hall of Fame class.

John Force is one of the most successful racers that the sport has ever seen and is, in fact, the winningest racer in the sport in terms of NHRA Event victories, with 154 to his name. Not only has he shown his impressive skills at individual events, he has also sustained success in terms of NHRA season world championships, where he also holds an unprecedented 16 Funny Car world champion titles to his name. This impressive resume is more than enough to justify his inclusion on this list and his inclusion in the 2020 National Motorsports Hall of Fame class.

Kenny Berstein was nicknamed "The King of Speed" during his career for good reason. Not only did he break the NHRA Speed competition record and become the first NHRA driver to exceed 300 mph in NHRA competition in 1992, he also did it again in 1994 when he broke the 310 mph threshold. He was a fast racer, but he also was a winning racer; he has six NHRA Championships, four in the Winston Funny Car event, two in the Top Fuel Event, and 69 total wins in NHRA national events. He was a force to be reckoned with and well-deserving of a spot on this list.

Don Prudhomme was one of competitive racing's first icons and legends. Nicknamed "The Snake," he held an incredibly impressive .660 winning percentage for his career. Don raced for over 30 years, and his longevity helped him achieve a fourth-place on NHRA's all-time list of wins, with 49 total, and have race victories in four different decades. Don was the first-ever NHRA Winston World Champion and the first four-time consecutive Winston Series title champion, a feat he accomplished from 1975 to 1978. Don's illustrious and impressive career was finally rewarded in 2000, when he was officially inducted into the International Motorsports Hall of Fame.

As evident by his 52 victories in Top Fuel and five separate NHRA titles, Joe Amato is unquestionably one of the most impressive drivers. Amato was a winner and a record-setter; in 1984, he became the first driver to break the 260 mph speed mark and the first to break the 280 mph speed mark, which he achieved in 1987. Amato was voted the number nine driver overall on the list of Top 50 racers from NHRA's first 50 years, and was rewarded at the end of his career by being inducted into the 2005 International Motorsports Hall of Fame class.

Who is the best men’s drag racer of all time?

When it comes to the best men's drag racer of all time, there is no doubt that the honor falls to the legend himself, Don Garlits. He not only holds three NHRA Season championships but also has won 53 NHRA championship events and another 91 wins in AHRA and IHRA competitions during his career. The first drag racing member of the Motorsports Hall of Fame, Don Garlits is undoubtedly the best drag racer.

What men’s drag racer has won the most NHRA events of all time?

The winningest racer in terms of NHRA events of all time is unquestionably one of the icons of the sport and one of the greatest to ever race, John Force. Starting his career in 1979 and still racing in 2022, he has shown no signs of slowing down. His 154 total NHRA event victories are the most all-time, and he set this record on August 15th, 2021, after achieving his 154th win at Menards NHRA Nationals.

Who was the first drag racer to reach 310 mph?

The first drag racing driver to break 310 mph is racing legend Kenny Bernstein, who set this record and was a four-time NHRA Winston Funny Car Champion. Kenny Bernstein initially became the first to break the 300 mph mark in racing, a feat achieved in 1992 during qualifying for the NHRA Gatornationals; he broke the 310 mph threshold when he reached the speed of 311.85 mph in 1994.