What is Endurocross (Indoor Enduro)? 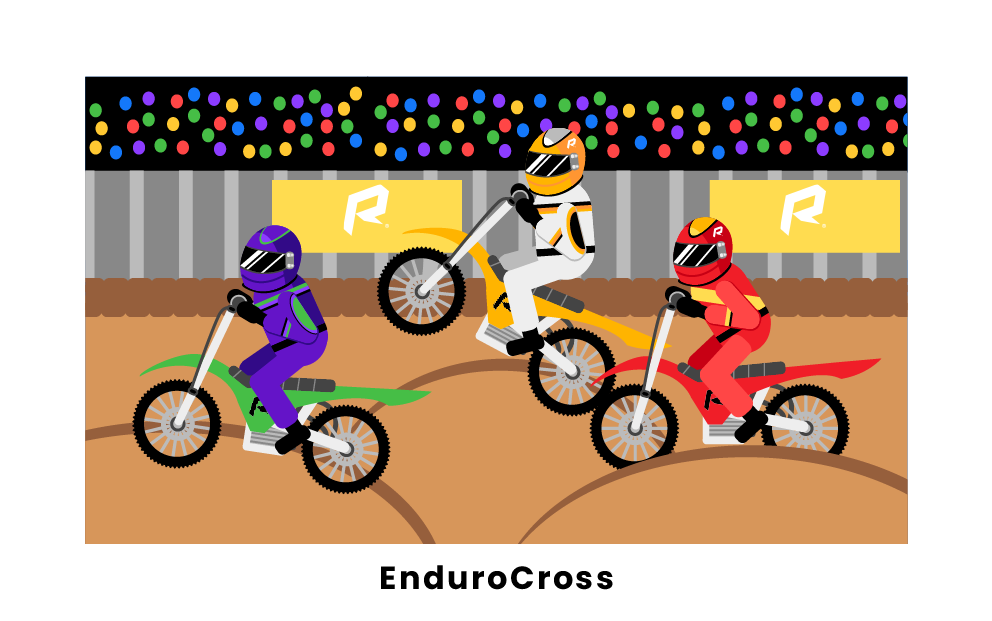 EnduroCross (also known as Indoor Enduro) is an indoor motorcycle racing sport that brings together motocross racing and outdoor enduro racing. In endurocross, obstacles that might be encountered naturally in off-road racing, such as large rocks, hills, or trees, are brought inside a stadium and made into an obstacle course for motorcycle racers. Oftentimes, these obstacles are exaggerated, such that riders will have to navigate large boulder gardens or jump huge piles of logs and fallen trees. Other, more artificial obstacles are also included, such as tractor tires and tire jumps.

EnduroCross began as an extension of off-road motorcycle racing in Europe, debuting at a Trial Racing event in Barcelona, Spain, in 2000. However, it was not officially made a sport until 2004, when American promoters Eric Peronnard and Tim Clark pioneered the first endurocross race in the famous New Orleans Arena in Las Vegas, Nevada. The first race was won by Ryan Hughes, who beat out famous European endurocross riders such as David Knight and Mika Ahola, cementing the popularity of endurocross in the United States. The following year saw the sport return to Las Vegas with sold-out crowds, and the booming popularity of endurocross led to multiple classes and types of races being developed over the following decade. In America, endurocross racing is governed by the American Motorcyclist Association (AMA) and is regulated internationally by the Fédération Internationale de Motocyclisme (FIM).

EnduroCross is a motorcycle racing sport that combines motocross and off-road racing. In endurocross, motorcyclists face challenging indoor courses made up of common outdoor obstacles such as boulders and trees, as well as man-made ones, such as tractor tires, all of which are exaggerated into extreme obstacle courses. EnduroCross was a popular, unofficial sport in Europe for many years until it was introduced to America in 2004. It quickly became a popular and officially-recognized sport managed by the American Motorcyclist Association (AMA).

What is the largest endurocross event in the world?

There are many major and challenging endurocross events in the world. The most well-known indoor endurocross event is the annual AMA EnduroCross Championship. The championship began with the well-known first American endurocross race in 2004, which later developed into an event of its own. The championship has been held annually since 2007, and the most recent winner, in 2021, was Colton Haaker of Rockstar Energy Husqvarna Factory Racing, a four-time Super EnduroCross Champion.

What equipment do I need for endurocross?

The most important piece of equipment required for endurocross, aside from the motorcycle itself, is a helmet. It is important for endurocross helmets to be correctly-sized and have good ventilation systems with grids to prevent the entry of mud or stones. Enduro gear is also important: enduro shirts and pants are made to be both lightweight and protective, often having shoulder and elbow reinforcements. Gloves are yet another important piece of endurocross equipment and should be well-suited to gripping the handles of the motorcycle, as well as protective and waterproof. Finally, endurocross riders require specialized boots, jackets, and goggles.

Pages Related to What is Endurocross (Indoor Enduro)?