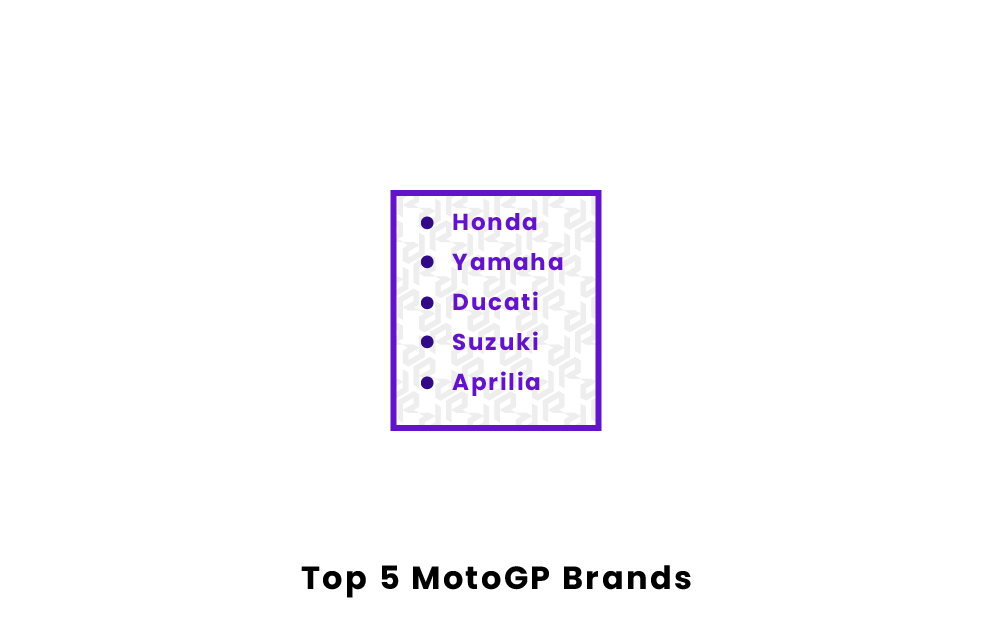 What are the most popular MotoGP brands?

Based in Japan, Honda is known worldwide for its commercial cars. However, the brand is also known by MotoGP fans as the most victorious manufacturer in sport. Over all racing classes, Honda's riders have accumulated the most wins with 65 titles. In 2017 alone, Honda and the Repsol Honda Team won the "Triple Crown" as they won the Constructor, Rider, and Team Championships. As of 2020, Honda has ranked riders Takaaki Nakagami (7th) and Alex Marquez (13th). Legendary rider Valentino Rossi also competed for Honda racing in the early 2000s. Today Honda does not attain as much success as rival companies like Yamaha, but still ranks high on the list of MotoGP brands.

Of the current top 10 racers in the world, 3 riders represent the brand Yamaha (as of October 2020). MotoGP legend Valentino Rossi currently races for Yamaha. He is part of Yamaha MotoGP manufacturing team and is their biggest winner. So far, Yamaha has had 7 world championships since 1999. Yamaha is neck and neck with brands like Ducati and Honda in their MotoGP prestige. Moving forward, they also have some of the best odds to expand on their record.

Another MotoGP powerhouse manufacturer is Ducati. The brand was born in 1926 in Bologna, Italy. The company has been in motorcycle racing since 1947 and has not looked back since. Two of the faces of the brand are Danilo Petrucci and Andrea Dovizioso. Overall, its riders have combined to win 18 Constructors titles and 15 Riders titles. Though its been in business for around 70 years, Ducati only won the World Championship one time behind racer Casey Stoner. Ducati does not only produce for MotoGP as they also have a prominent influence in Superbike competitions. Moving forward Ducati hopes to win more titles and build upon their long history.

Michio Suzuki began his company Suzuki in 1906 to produce clothes. For almost half a decade the company followed this path, until World War II brought the need for a change to manufacturing. Then, Suzuki began to produce motorcycles. The brand's first MotoGP win came in 2007, just over a century since the brand's inception. Today, riders Alex Rins and Joan Mir don Suzuki bikes and represent the brand in MotoGP. The two races have done well, finishing in second and third place in this year's Circuit de Barcelona-Catalunya. Suzuki is not far behind Ducati, Yamaha, and Honda in its MotoGP successes.

Like Ducati, Aprilia is also a product of Italy. After World War II, Aprilia began production of motorcycles in 1945. Though it is a relatively small manufacturer in the motorcycle industry, the brand has still found great success in MotoGP. The brand had two racers finish in the top 16 spots of 2020s first MotoGP race, Circuit de Barcelona-Catalunya. Valentino Rossi actually raced on an Aprilia from 1996-1999. Aprilia is still toward the bottom of the MotoGP racing power structure and is likely to be happy with just two racers in the top 16 spots.