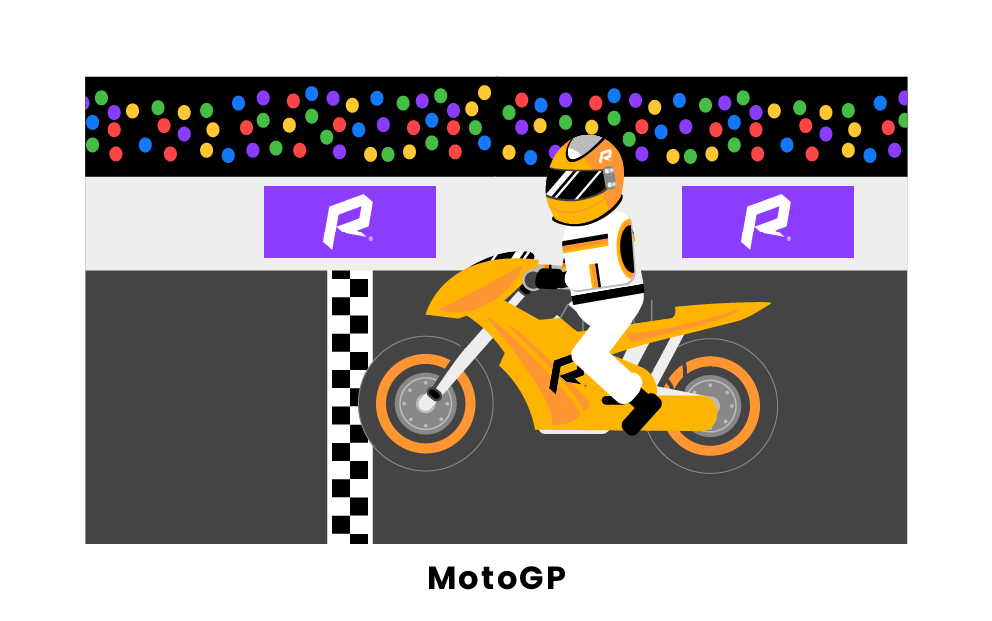 Grand Prix motorcycle ranking is the premier class of motorcycle road racing. Sanctioned by the Federation Internationale de Motocyclisme, there have been MotoGP events since the early 20th century. There are typically around 19 races all around the world with a season that goes from March until November. Racers get rankings and there are standings that are found online throughout the course of the season. 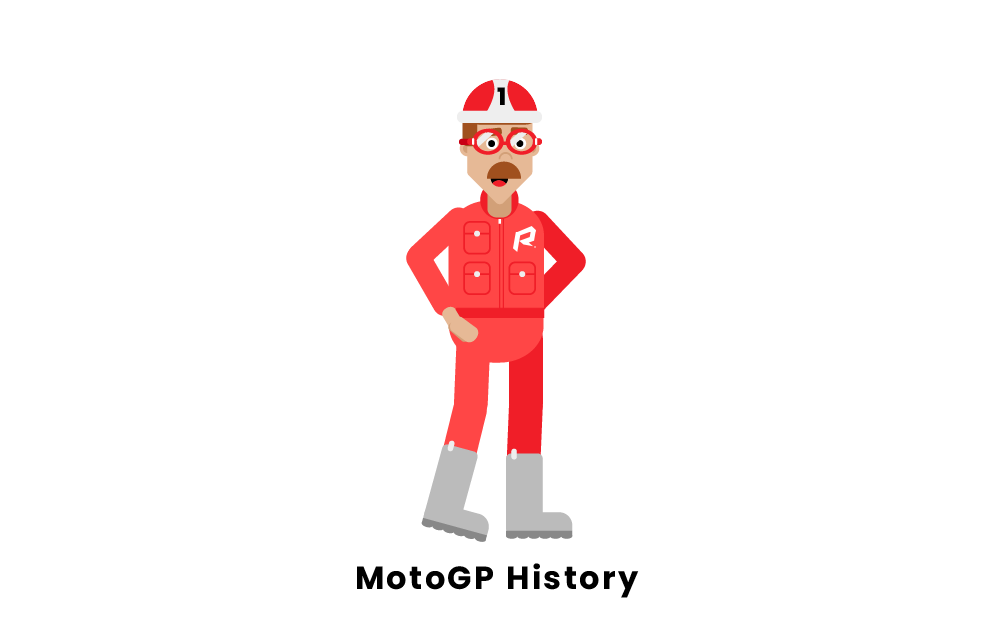 MotoGP is the oldest motorsport World Championship. Its first annual competition was held in 1949. In the early 1900s, Grand Prix were held in various countries. Finally, the first formal Championship was held in 1949. Once the Japanese motorbike industry began to boom during the 1960s, popular brands we see today began to be more prominent in Motorcycle racing. In 2002, the World Championships were rebranded as MotoGP. This also brought the introduction to 990cc racing, which is a type of engine that allowed the bike to travel much faster. 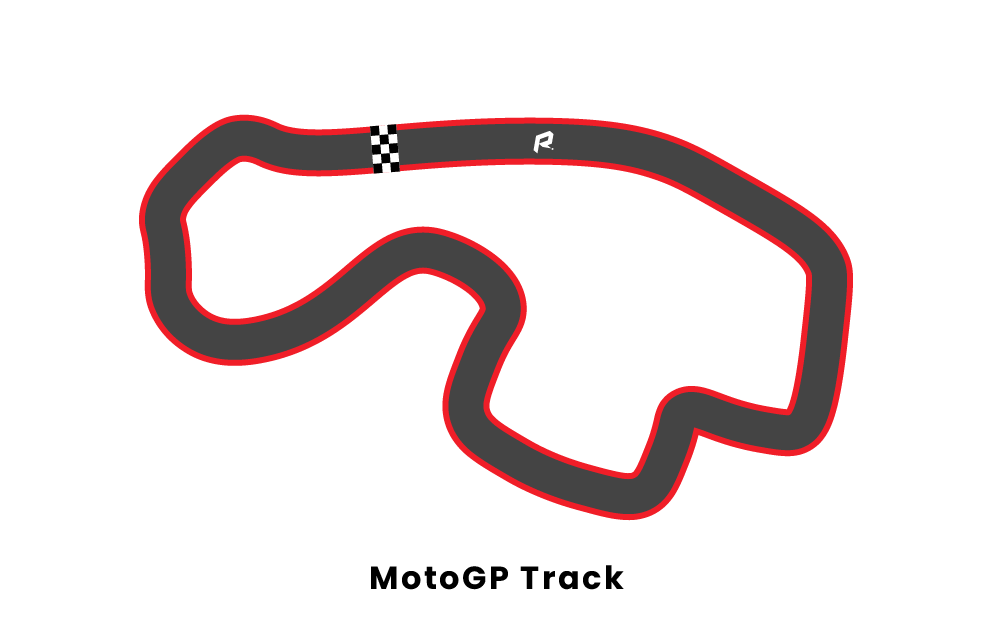 The surface of a MotoGP track is made of smooth pavement that will allow the riders to go at a fast pace hopefully without losing control. When creating the surface, it is extremely important to make sure that it can prevent water from staying on the track. There should be something called crowns that will allow the water to roll off the track when it finishes raining, and will not leave puddles. If the track is still soaking wet and contains a lot of standing water after showers, then that could force a cancellation of the event to protect the safety of the riders. 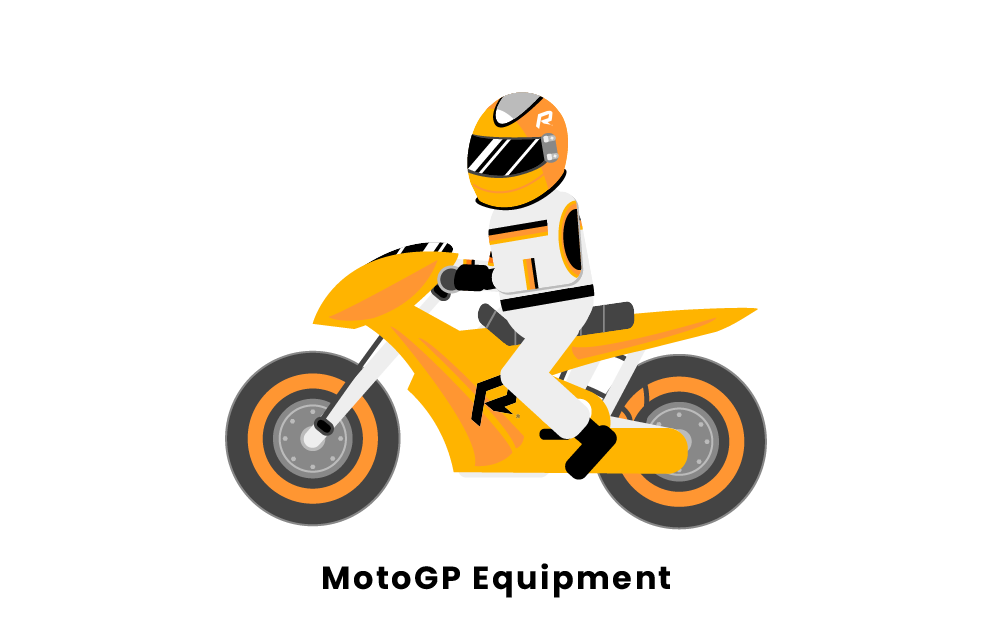 Equipment for motoGP riders have numerous protective elements. This is a sport that brings on a lot of risk, and therefore safety is the number one priority. A determining factor when choosing a rider’s equipment is the weather. Rain is an additional element of risk that requires each device to be adjusted for the safety of the rider. Below is a list of equipment that a MotoGP rider can not compete or train without. 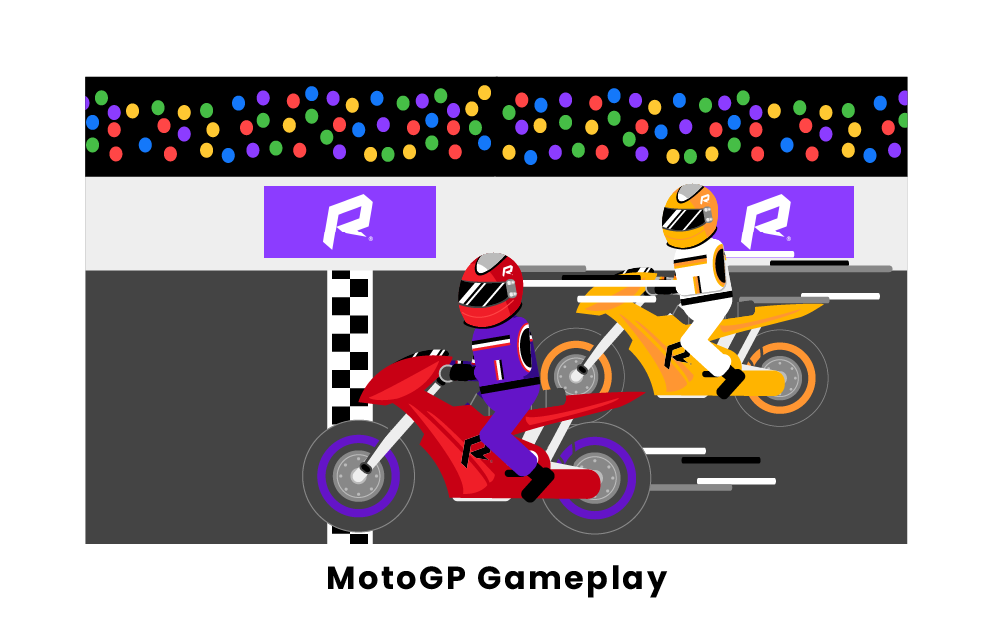 Each MotoGp race is a sprint from start to finish for about 45 minutes. The distance traveled ranges from 100 to 13 kilometers. Points for the Grand Prix are rewarded to the top 15 riders. The winner will get 25 points while the second and place finishers will get 20 and 15. The 15th finisher will get one point. During a race, the rider may have to make pit stops for his team to do repairs on things like fuel or tires. 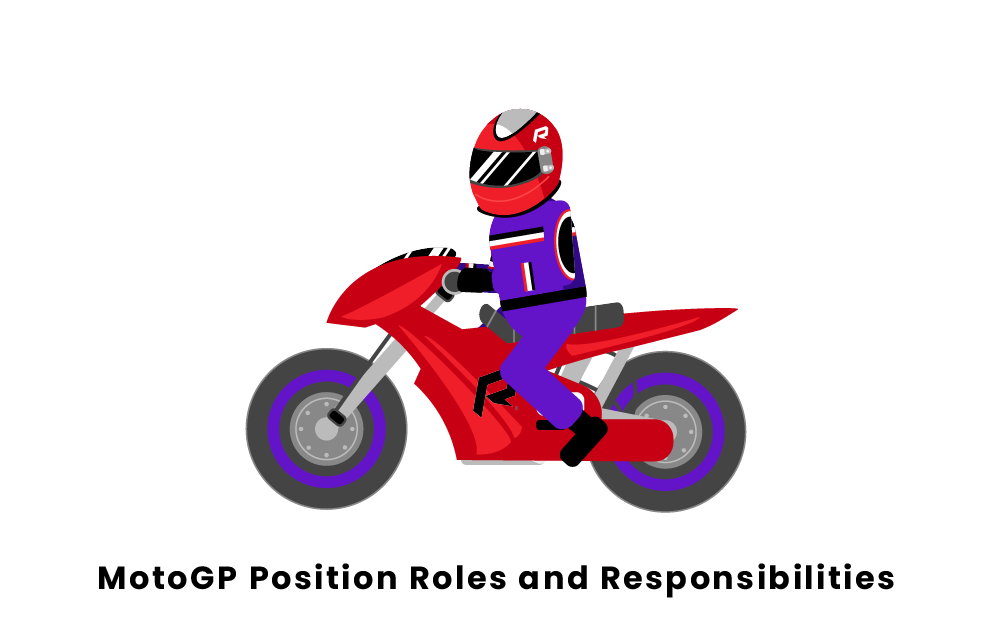 Along with a team, there are a lot of crew members that are vital to a rider’s success in MotoGP. The crew is led by the crew chief who is the key man behind a successful pit stop. The crew will also have a telemetry which collects data and analysis which will allow the team to make changes to a rider’s strategy. Finally, there is a mechanic, which is vital in making sure that every part of the motorcycle will perform properly. Without these people, it will be very difficult for a rider to have a successful race. 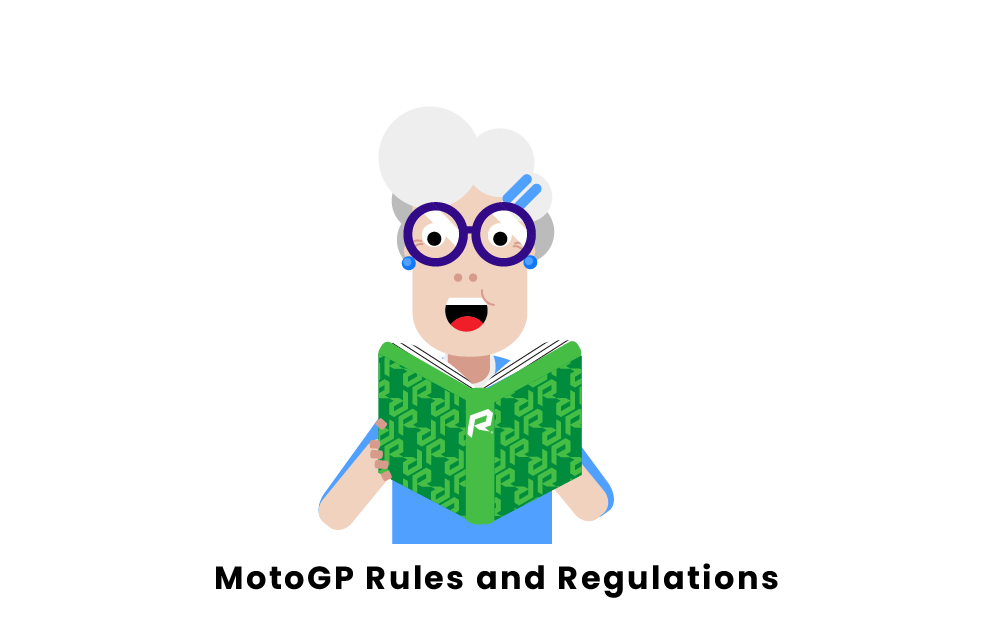 Like any sport, MotoGP has rules and regulations that must be followed. The Motogp is raced with 1,000cc prototypes, and there is no exception to this rule. The riders have seven engines throughout the whole season. For the last three years, teams have needed to use the same electronic management system. Each rider has a limited tire allowance, and motorcycles are not allowed to carry more than 22 liters of fuel. 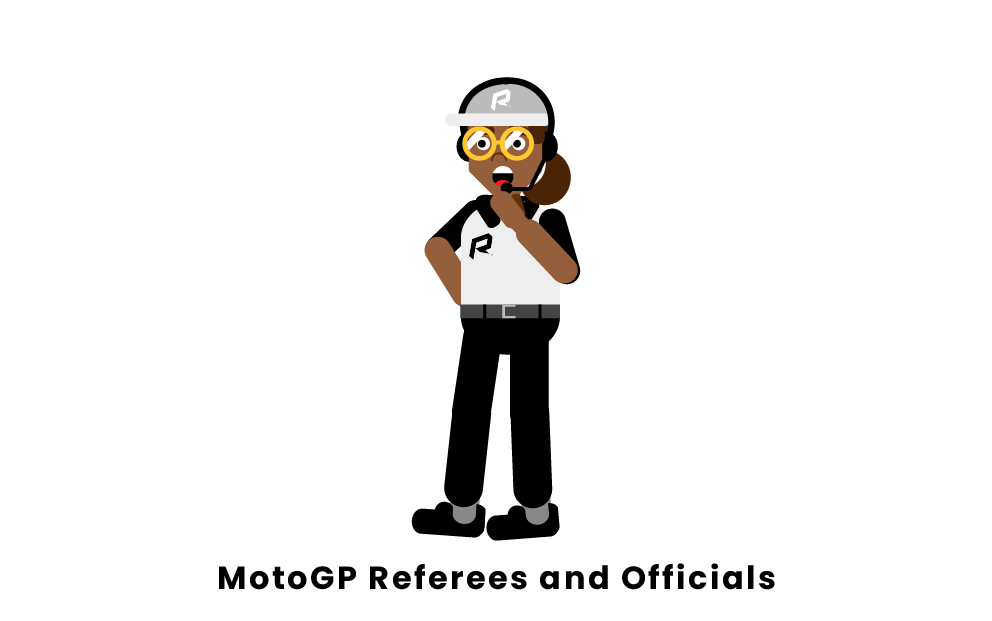 Referees are there to make sure the event runs smoothly and that all of the rules are being followed. Another role of them is to penalize any riders that might be cheating or breaking any rules. MotoGP has numerous officials that help organize and run the events. There can be up to 600 officials that volunteer their time to ensure a positive experience for all riders and spectators. 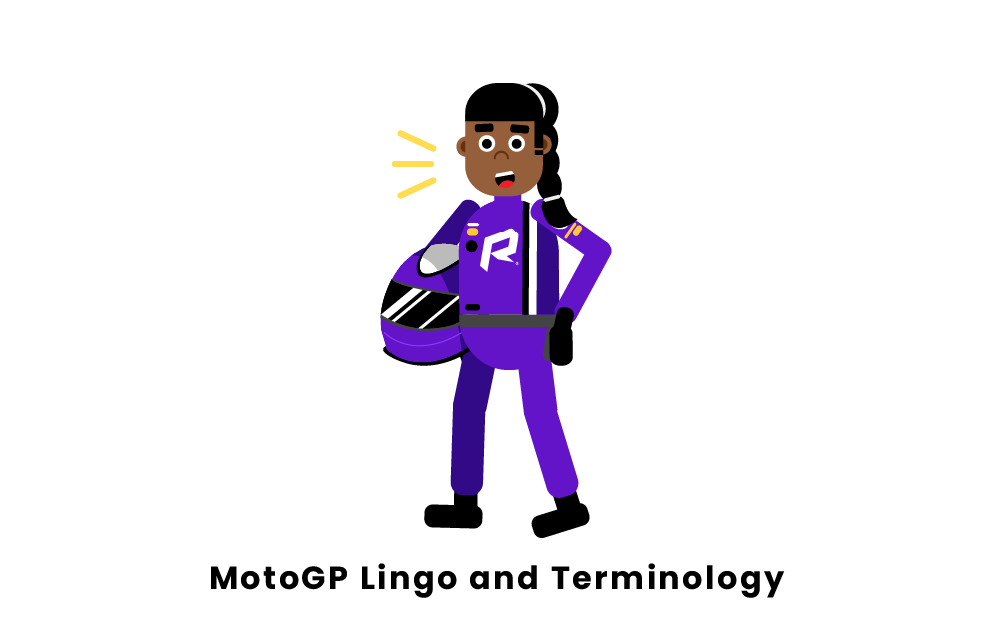 There are a lot of terms that are associated with MotoGP. When watching an event on TV, you may hear an announcer use some of the terms below. It is important to know what they mean so you have an easier time following what is going on! 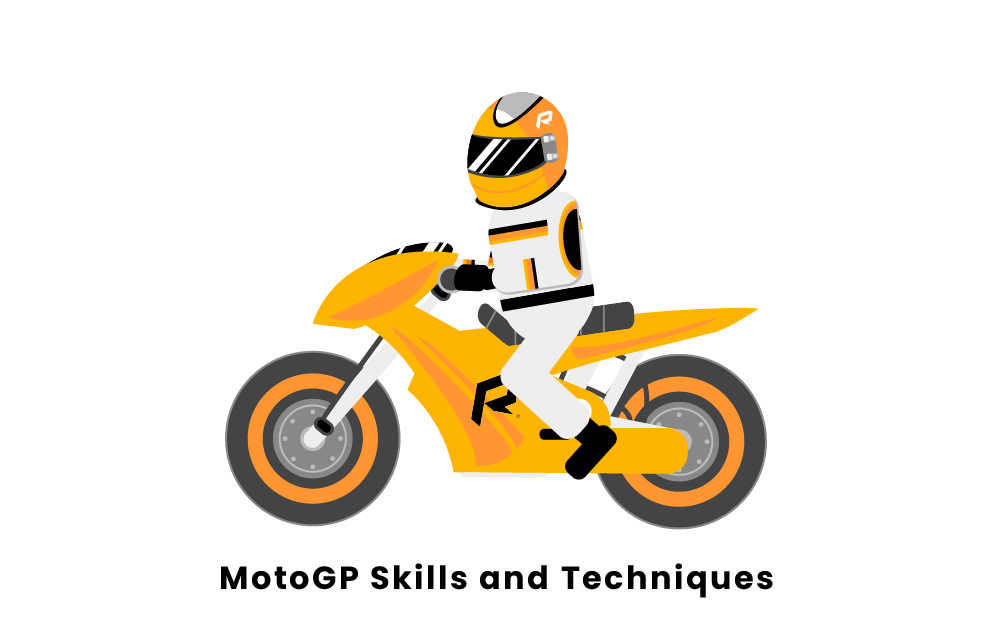 When on the track, racers are generally either on the throttle or on the brakes. Generally, there is no free wheeling as it will be a waste of time. A popular technique is called trail braking in which racers will slow the bike as quickly as possible from one speed to another. Racers perform this technique when they approach a turn and apply full braking force. As they begin to turn in, they will ease off the breaks, as the angle of the bike lean increases. Once they reach the apex, they apply the throttle and go back to full speed. 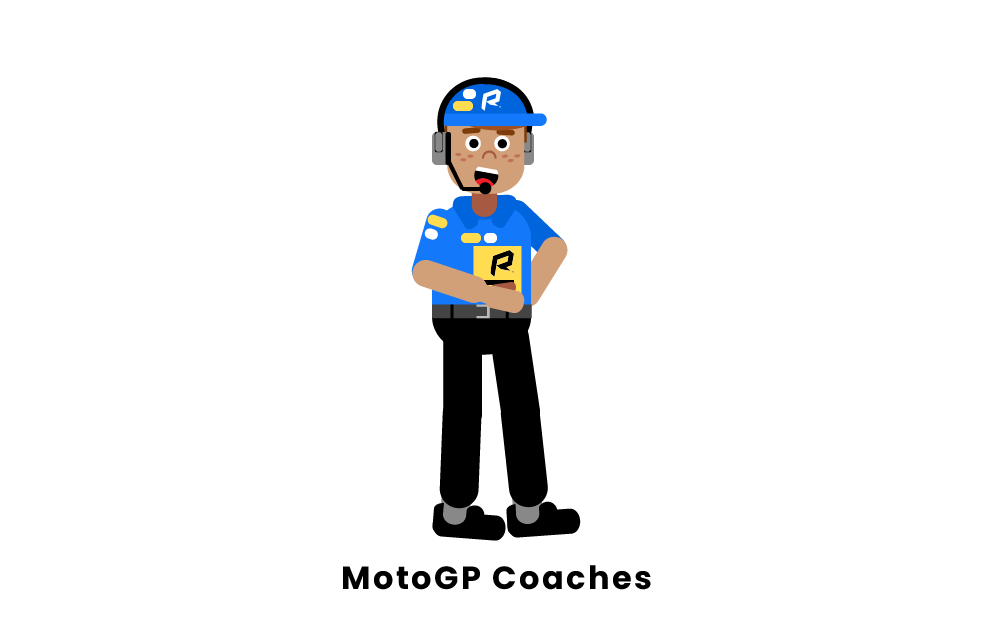 Even the most talented MotoGP racers have room to improve and learn more. Coaching will help riders reach their goals, sometimes even to a level they never thought possible. A coach needs to understand the skills a rider needs to achieve their goals. In order to achieve this safely, a rider is going to need a coach present to properly increase the challenge and become a better rider. A great coach will also make sure that the rider’s mind is in the right place. It is important for the rider to be confident, but not overconfident. 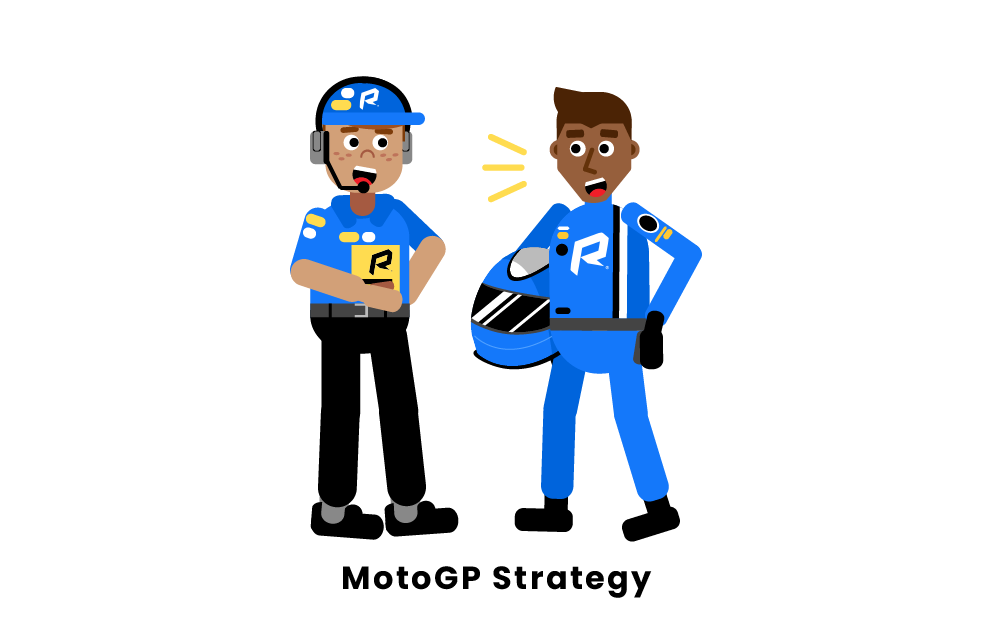 There are a couple of different strategies that a MotoGP rider follows in order to have a successful race. One strategy that a team will always follow is testing and planning. Going into the race, a rider should know everything there is to know about the track they will be on. They also should know the weather, and be prepared for anything that might affect riding conditions. It is also important that they choose the right tires. Depending on conditions, different tires could perform better in different situations. Overall, it is extremely important that the rider and his crew will do copious amounts of testing to prepare themselves for race day. 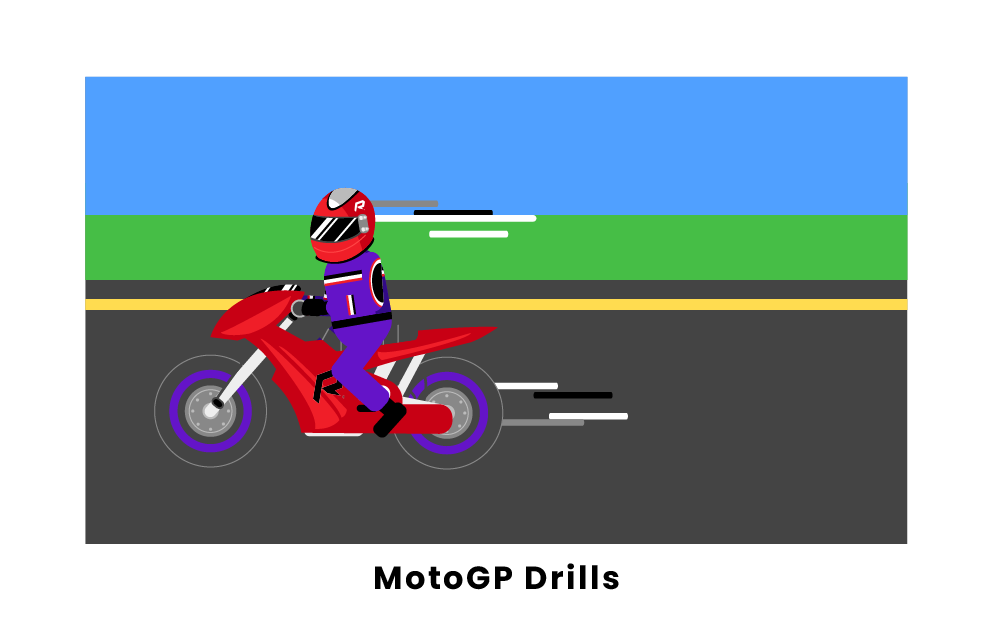 There are a lot of things that MotoGP riders do to stay fit when they are not in a race. Depending on conditions, a rider can lose up to two liters of sweat by the end of a 45 minute race. Therefore, it is essential for them to be in good shape. Cardio workouts such as running and biking are great ways for the rider to have the stamina to complete a race. Bodyweight exercises such as pushups and pullups are also necessary for the rider to be strong enough to go through the entire race. 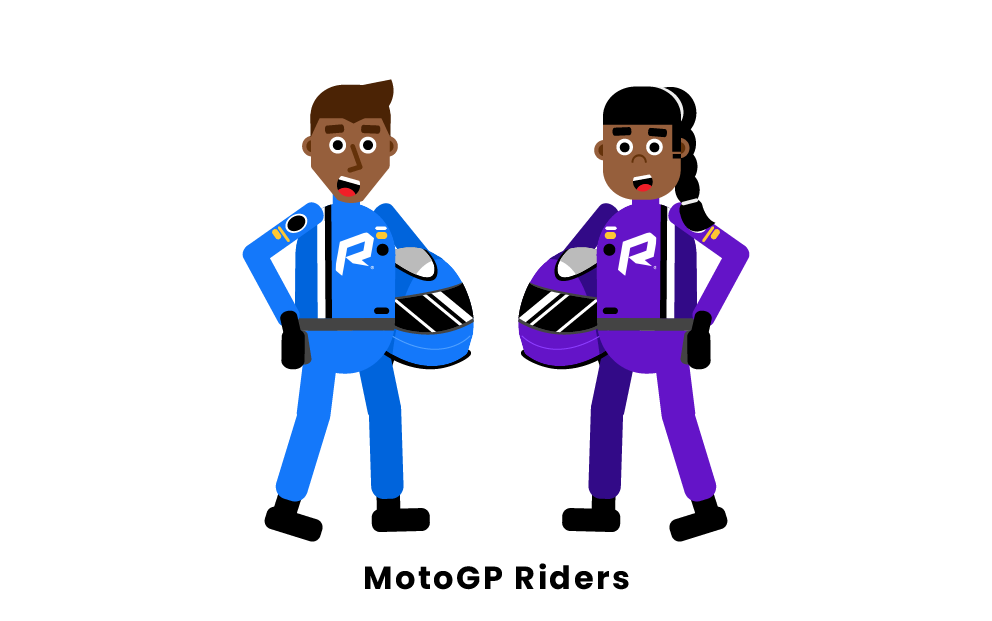 Currently, there are 22 riders in MotoGP. Each rider is paired with another and they are on a specific team in which they get funding from a certain company. Marc Marquez is the current leader as of 2019 dominating with 420 points. Below is a list of other successful MotoGP riders, past and present. 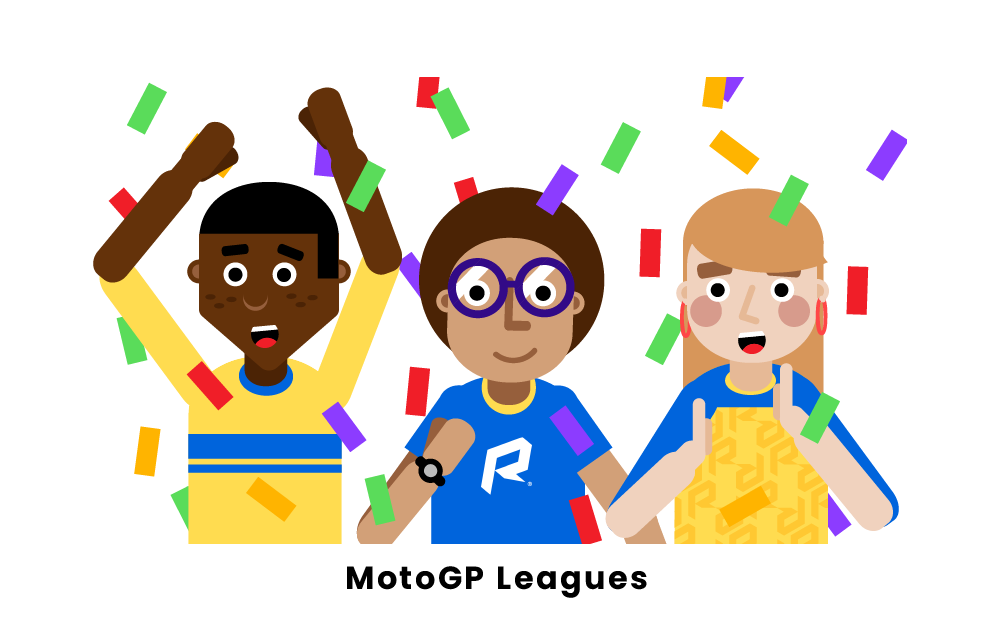 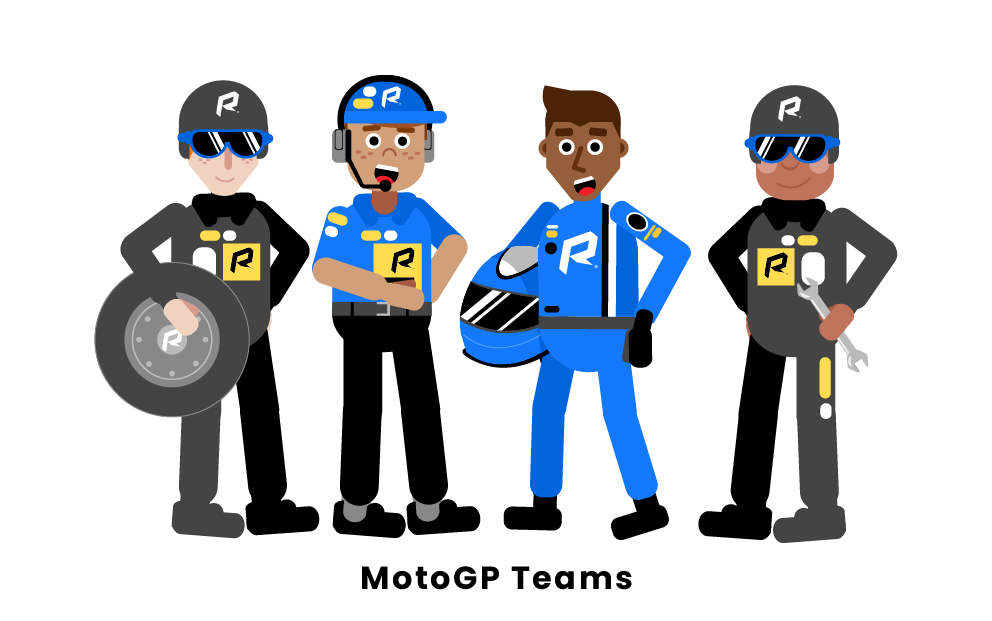 There are currently 11 teams in MotoGP. MotoGP has factory teams and satellite teams. Factory teams are supported by the official factories such as Yamaha and Honda. A satellite team is often using equipment from the factory teams, but will maybe have older editions.This has given factory teams an extremely large advantage for a long time. Each team has two racers, and are funded by the factories. While the individual rankings are perhaps more important, there are team rankings that are based off of both rider’s finishes as well.

Below is a list of MotoGP teams and some riders on their teams: 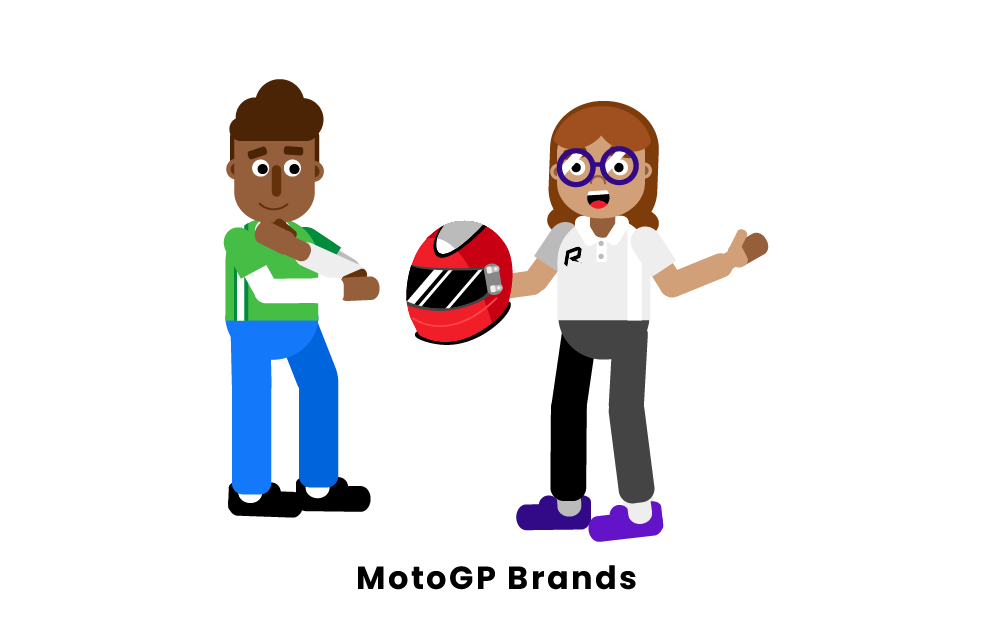 There are an extremely large number of brands that like to get their names in the mix of a Grand Prix event. Similar to NASCAR, a rider will have his suit, helmet, and bike covered with stickers of the brands that are sponsoring him and his team. THe manufacturers such as Honda, Yamaha, and more do a great job getting their name out during these tournaments. Along with that, Red Bull is another brand that gets involved with MotoGP. 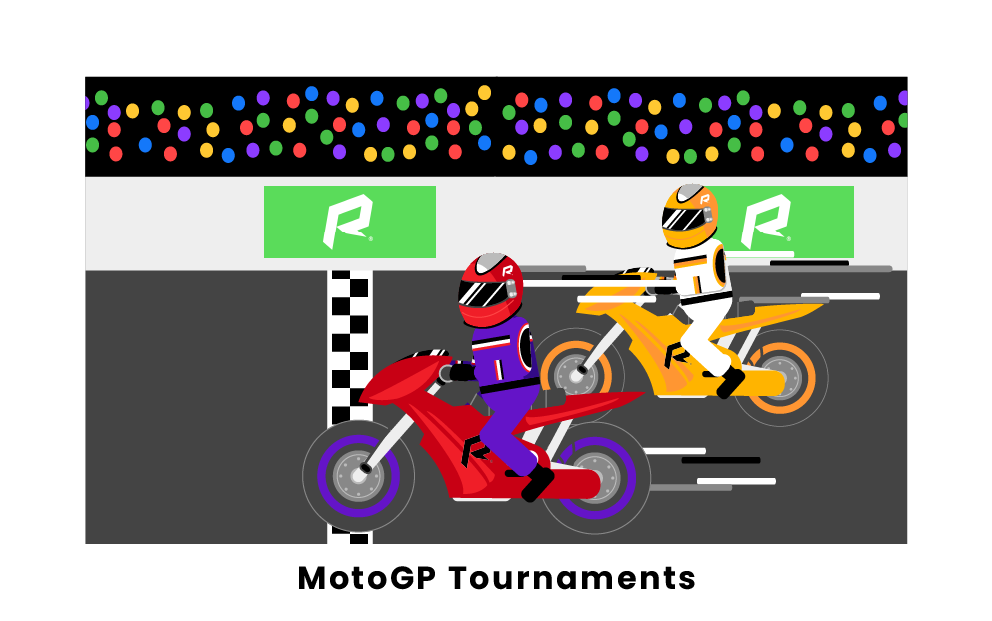 Throughout the season, there are many MotoGP events that take place which eventually lead up to the championship. Countries all over the world host events that the top riders will travel to. In 2019, there were 19 Grand Prix that were held in 15 different countries. These countries include the United States, Australia, Brazil, Japan, and more. The season will go from March to April, and there are usually 1-3 Grand Prix races a month. Below are a couple examples of popular events. 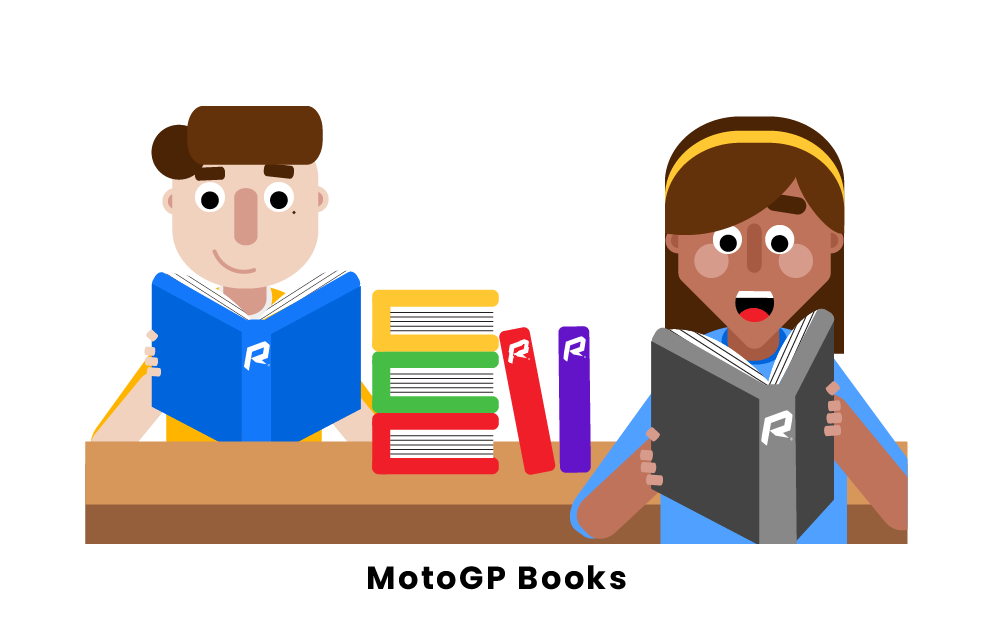 There are a wide array of motorcycle books in MotoGP, talking about some of the most notable moments in the sport’s long history, or autobiographies of most successful riders to ever hop on a bike. Some readers may want to learn more about the technical aspects of the sport, while others want to dive deeper into the biggest moments in the sport’s history. Below are a couple of great options for you to read.

MotoGP stands for Grand Prix motorcycle racing, and it is the oldest established motorsport world championship.

How many horsepower is a MotoGP bike?

In MotoGP, a bike will have a horsepower anywhere between 150 and 250, making it extremely fast and valuable.

What CC is MotoGP bikes?

In MotoGP, there are 1,000 CC bikes. The different classes will all have a different cc. For example, Moto3 bikes all have 250 cc and Moto2 bikes have 600cc.

How much does a MotoGP bike cost?

The bikes that we see professionals such as Valentino Rossi ride on are extremely expensive. MotoGP bikes are locked away under surveillance and are estimated to be worth about $2 million. Due to the costly materials, high tech design, and customization of the bike, these products are extremely expensive. Each engine is individually made for a specific rider, making production extremely costly.

Pages Related to What is MotoGP?