What is Freestyle Motocross? 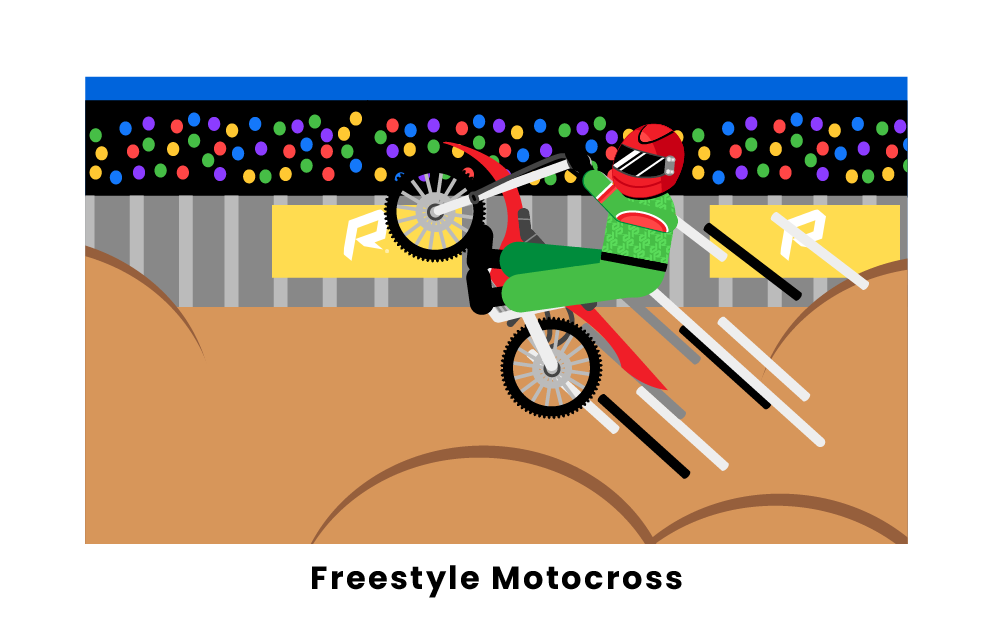 Freestyle motocross is a motorsport where riders strive to be the biggest, boldest, and brightest as they catch air and perform death-defying stunts in front of a panel of judges. From backflips to whips, heel clickers to tsunamis, FMX tricks are incredibly acrobatic and creative, with riders always looking to perfect their craft and test the limits.

While motocross has been around since the 1920s, it experienced a boom of popularity in the 1970s and grew to have several sub-disciplines, including FMX and BMX. Elevating FMX as its own sport was a collective effort by many talented riders, but decorated pioneer Mike Metzger is considered to be the godfather of freestyle motocross. Motorcyclists across America, New Zealand, and Australia, in particular, had been practicing and performing stunts years before the first freestyle competitions took place. Freestyle motocross became popular enough to gradually be introduced into motocross competitions in the late 90s and early 2000s.

What is freestyle motocross?

Freestyle motocross is a discipline of motocross in which motorcyclists make jumps and perform death-defying stunts. In competitions, riders are graded on a 100-point scale by a panel of judges for their performances with difficulty, style, ingenuity, and execution of the trick all taken into account. Competitions can be either big air or classic freestyle format. In big air events, riders make two large jumps, while in freestyle motocross events, riders perform stunt routines with a number of jumps in 14 minutes or less.

What are the biggest freestyle motocross events?

Whether big air or classic freestyle, FMX competitions are some of the most thrilling to watch in motocross. The X games are perhaps the most famous and lauded events for FMX, where talented riders have had a history of breaking barriers year after year. The Red Bull X Fighters competition is equally prestigious and wildly popular, while the Moto-X Freestyle National Championships and Nitro Games are also thriving and exciting.

What equipment do I need to participate in freestyle motocross safely?

The gear a rider wears for FMX is the same as for all motocross sports: a helmet, goggles, gloves, boots, MX pants, a jersey, and protective body armor, including a chest protector, elbow pads, and knee pads. While the protective gear is the same as in any motocross sport, the motorcycle itself is specially modified. Motorcycles for FMX are typically smaller and more lightweight in order to catch more air, with very strong suspensions and high-quality tires to ensure a safe landing.

Pages Related to What is Freestyle Motocross?