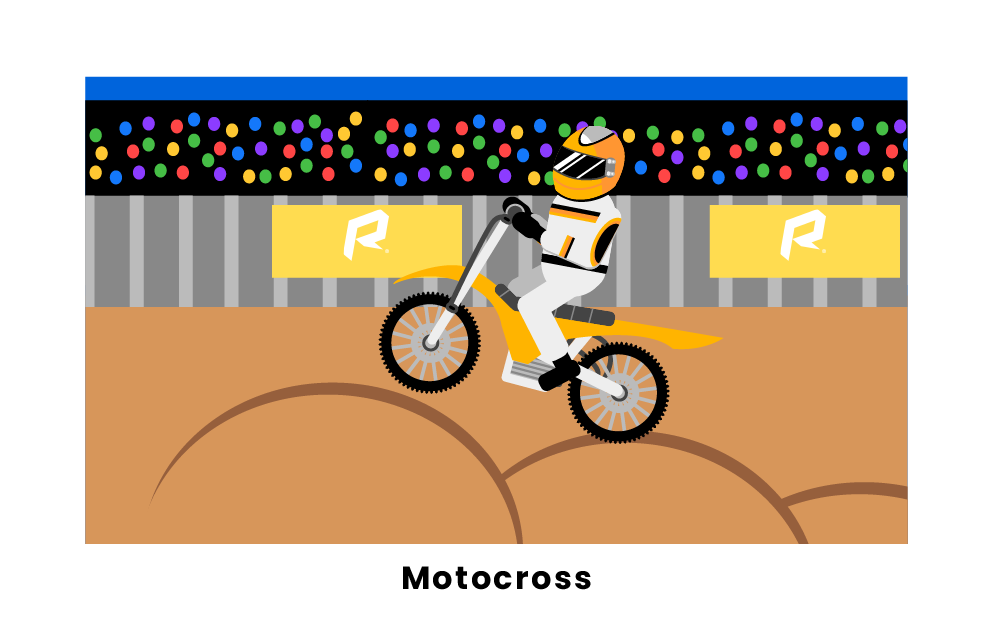 Motocross was first founded in the United Kingdom back in 1924, where the first races were initially known as “scrambles.” The sport has been popular in America since the 1950’s, and Eddison Daye has been credited with helping the sport become what it is today. The sport consists of a race between multiple participants on dirtbikes. The tracks are outdoors, typically made of dirt, and known for having sharp turns and hills that last one to three miles long.  Completing a motocross race of this length typically takes about 40-60 minutes. Due to the sport being so physically demanding, the races are split into two heats.

Today, the Fédération Internationale Motocycliste is the highest international committee for the sport, and they hold an annual championship race called the FIM Motocross World Championship. The X Games is a popular extreme sporting event that takes place in the United States and has helped to promote stars like Travis Pastrana, who won the 1st ever X Games Motocross event back in California in 2006, and Tarah Gieger, who accomplished the same feat in the women's division.

Motocross is a motorcycle racing sport that pits opposing racers against each other in a 1-3 mile long race on a dirt track that includes sharp turns, steep inclines and declines, as well as wet or muddy areas. At times, the sport can be dangerous and physically demanding. Injuries are common, and accidents are prone to happen due to the nature of the machinery used. For this reason, riders are required to wear safety gear, including equipment such as a helmet, chest protector, cotton jersey, and nylon pants.

What are the biggest motocross competitions in the world?

The biggest competition for motocross on an international scale is the FIM Motocross World Championship, which pits 44 riders across 54 races in a battle for the title of champion.  The American iteration of motocross competitions is highlighted by the Lucas Oil Pro Motocross Championship, featuring multiple classes of racing and a yearly schedule of events throughout the summer months. In the US, the X-games Motocross competitions hold the most popularity and bring fame to athletes such as Ricky Carmichael, Travis Pastrana, and James Stewart Jr.

Where is motocross most popular?

Pages Related to About Motocross