What Is A Monster Truck Rally? 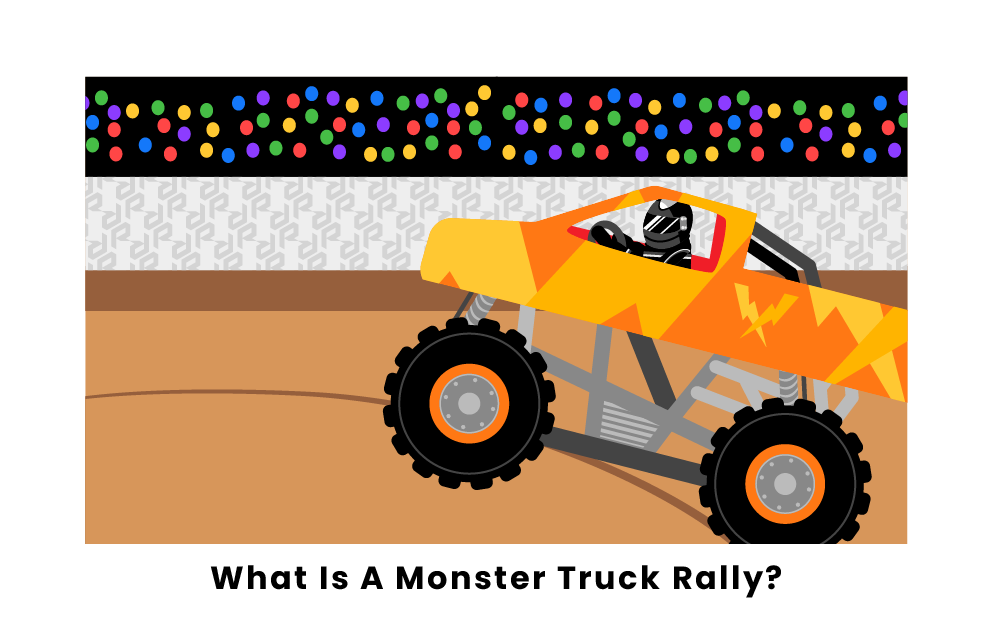 Monster trucks are big, powerful machines built to put on a noisy and entertaining show. Maybe you have seen monster trucks performing on television, or perhaps a monster truck show is coming to your town. Have you ever wondered what a monster truck rally is? Keep reading to find out what to expect when you enter the fun and raucous world of monster trucks.

A monster truck rally, also commonly called a monster truck show, is an event where drivers in monster trucks race and perform tricks, either as the primary or secondary form of entertainment for a live crowd.

Every monster truck rally features a head-to-head knockout race portion, followed by a skills segment, then a freestyle event as the finale. Although monster truck rallies are styled as competitions, with drivers receiving scores for each event, the results are largely predetermined by the promoter in an arrangement similar to the one in professional wrestling.

The biggest and most popular monster truck tour is Monster Jam. Other North American tours are Monster Truck Wars and Monster Truckz.

Monster truck rallies are held in professional sports arenas–usually football, baseball, basketball, hockey, or multi-sport stadiums, while the arenas are in the offseason from their primary sports. These stadiums are perfect for accommodating the tens of thousands of fans that monster truck rallies often draw. Monster truck rally season runs from the spring through the fall.

For each monster truck rally, the track and performance floor area is constructed by a crew of workers, who then tear it down following the event. A typical Monster Jam track requires over 3,000 cubic yards of dirt and more than 6,000 sheets of plywood, in addition to plenty of plastic sheeting, paint, and junked cars.

The tracks feature a variety of jumps and obstacles, such as junked cars, buses, and RVs, which are designed to make the trucks appear out of control and provide maximum excitement. During the race portion, the two competitors run on separate, adjacent courses of equal length to prevent collisions.

All monster truck rallies feature three main events at their core: a race, followed by a skills challenge, with a freestyle competition as the finale. Other events may be interspersed between the race and the finale, such as a donut competition.

Monster truck races are conducted in a head-to-head knockout tournament format, with only two trucks racing at a time. Qualifying rounds are run before the race to determine seeding and matchups, if necessary.

A starting field of eight or 16 trucks is reduced to four semifinalists after one or two initial rounds of one-on-one races. The winners of the two semifinal races advance to the final round, which is used to determine the winner of the race event.

Next comes the two-wheel skills challenge, often simply called the skills challenge. During this judged event, drivers get multiple opportunities to perform the best trick while bringing at least two wheels into the air.

Donut competitions are judged events based on a single metric: how many donuts the driver can perform. Each driver gets one try to make as many consecutive tight, 360-degree turns (also known as donuts) before losing control and spinning out. The driver to successfully execute the most donuts wins, with those making fewer donuts ranking lower, accordingly.

The freestyle competition is the conclusion to any monster truck rally and is a fan favorite. During the judged freestyle event, the drivers perform a variety of stunts and tricks across the floor area and around the track, each at designated times and places as part of a rehearsed routine. Judges score trucks on a scale of one to ten based on the difficulty of tricks performed, the overall impact of the performance, and crowd reaction.

The criteria judges use to assign scores in freestyle competitions include the height and length of each jump, the number of obstacles hit and donuts executed, and the number and variety of tricks performed over the course of the routine. They also consider the number of wheelies, sky wheelies, trick combinations, saves, and obstacles encountered in reverse.

The order of events is important in a monster truck rally, as drivers often intentionally wreck their trucks to conclude their freestyle performances, to the crowd's delight. This leaves the trucks inoperable, and each team is tasked with repairing their rig before the next monster truck rally.

Pages Related to What Is A Monster Truck Rally?