What Are Monster Trucks? 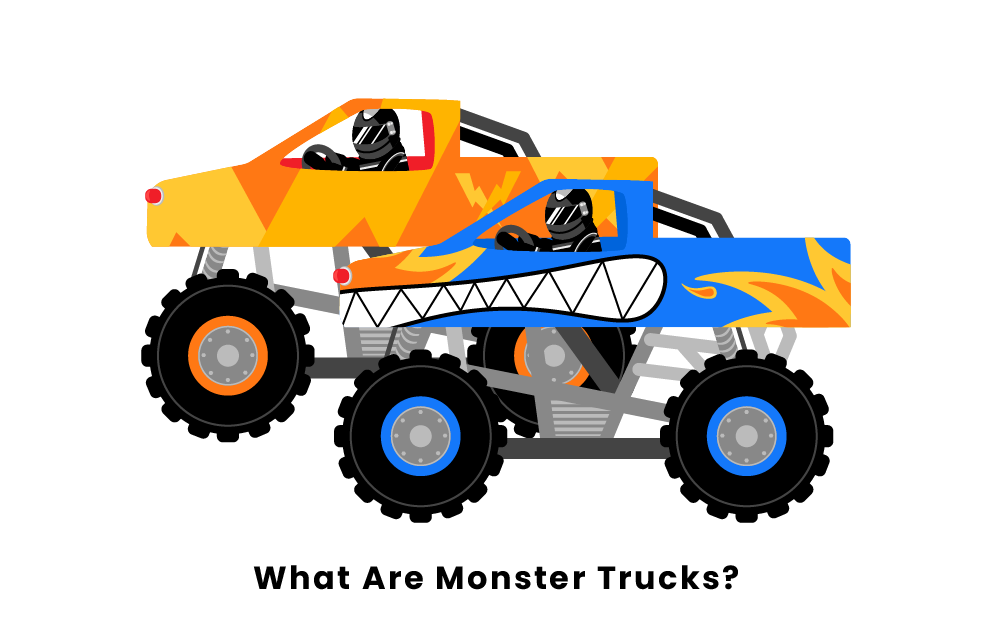 Monster trucks are big, loud, and exciting. More than twice the size of regular pickups, they perform flips, cartwheels, and other tricks, including jumping and crushing cars. But have you ever wondered what monster trucks are? Keep reading to find out!

A monster truck race course includes obstacles such as jumps and junked cars. Cars are also available to jump and crush during skills and freestyle competitions. Drivers commonly wreck their monster trucks as exciting finales to their freestyle performances. These wrecks are wildly popular with fans and costly to teams, who must repair the damage before the next show.

In the late 1970s, modified pickup trucks became popular in North America, as did the activities for which they could be used, especially off-roading, mud bogging, and tractor pulling.

One of the biggest and most capable modified trucks of the time was a Ford F-250 owned by Bob Chandler, featuring 48-inch tires and nicknamed “Bigfoot.” Just for fun, in 1981, Chandler filmed a video of Bigfoot driving over and crushing two junked cars in a field.

An event promoter saw the video and, convinced of its entertainment value, persuaded Chandler to perform as a sideshow attraction at a series of tractor pulling events. Chandler’s debut performance with Bigfoot occurred in 1982 at the Pontiac Silverdome in Michigan.

In front of over 65,000 fans, Bigfoot climbed a mountain of junked cars, crushing them with ease. The crowd loved it. This was the first time Bigfoot had been fitted with larger 66-inch tires and is considered to be the first true monster truck show.

Monster trucks have only increased in popularity since then, getting larger, more powerful, and more capable of performing tricks. Monster Jam is the primary tour company and promoter for monster truck events, but other circuits exist, such as Monster Truckz and Monster Truck Wars.

Monster trucks are hulking, hand-built performance vehicles that are designed for maximum power, speed, maneuverability, and durability. Some monster trucks use a stock pickup chassis as their base, but most, including the most successful, are constructed using a tough composite body mounted on a custom fabricated tube-frame chassis.

A typical monster truck measures 10 to 12 feet high, 12 feet wide, and nearly 20 feet long. For competition, each monster truck is required to weigh at least 10,000 pounds; some trucks are as heavy as 15,000 pounds.

Monster trucks are capable of feats of extreme performance. They can perform back and front-flips, accelerate past 100 mph and execute jumps that reach heights of over 30 feet in the air, and cover distances of over 200 feet.

Powerful engines are required to move these massive machines with such agility. Monster trucks use large-displacement, supercharged V8 engines, typically built on billet blocks and running on alcohol fuel. The hardy, high-performance engines are tuned to produce between 1,500 and 2,000 horsepower.

Aiding in their maneuverability, monster trucks utilize overbuilt four-link suspensions and run on 66-inch tires designed for agricultural use. A set of four tires costs over $10,000. Every part of a monster truck is equally expensive, with an entire truck costing between $100,000 and $250,000 to build. An engine alone costs $40,000, and typical repairs and maintenance cost $10,000 per event.

Bigfoot, the original monster truck, remains one of the most famous monster trucks of all time. More than 20 iterations of Bigfoot have been built over the years, some with tires as big as ten feet in diameter. Although Bob Chandler has retired as a driver, Bigfoot continues to perform, with a team of drivers serving behind the wheel.

Pages Related to What Are Monster Trucks?