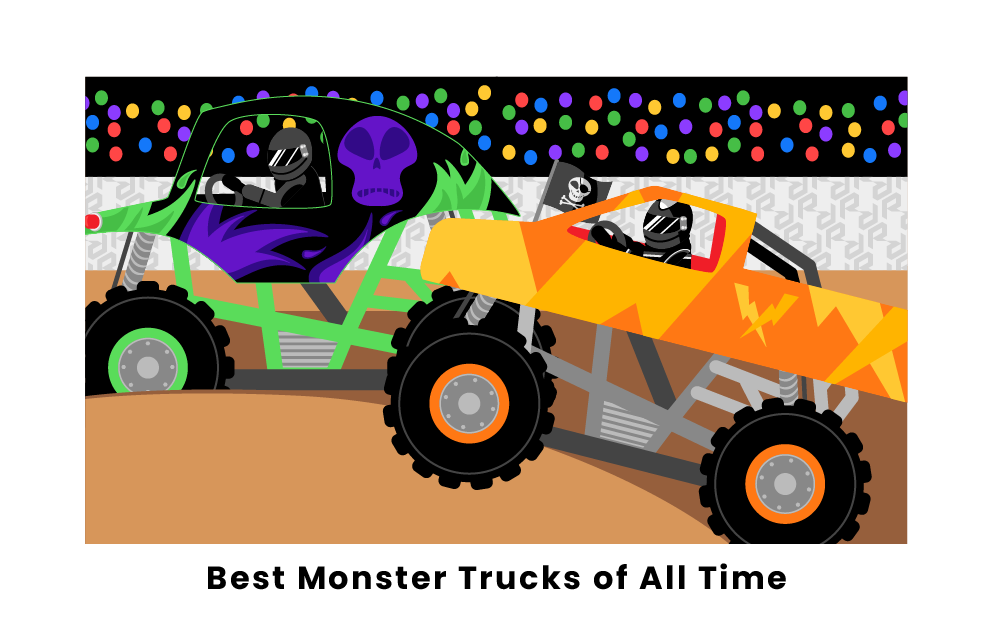 Monster trucks have made for some of the most exciting and spectacular moments in motorsports history. Through wheelies, impossible jumps, and gritty neck-and-neck races, trucks both past and present have shown incredible creativity and competitive spirit. Whether exciting new additions like Megalodon or longtime rivals like Grave Digger and Max-D, the best monster trucks can put on an unforgettable show.

What are the best Monster Trucks of all time?

Grave Digger is the first thing that comes to mind when most people think of the monster truck world, and for a good reason. The phantom-inspired truck is arguably the most historied, accomplished, and forever relevant vehicle, still captivating audiences in the monster truck world since its inception in 1981 by creator David Anderson. Grave Digger would become a pioneer for performance stunts which performed some of the first common tricks like donuts, wheelies, and jumps, collecting Monster Jam championships and immeasurably spectacular moments for the sport along the way. One of the most memorable was Krysten Anderson performing the Guinness World Record highest jump at an astonishing 34 feet in the air, smashing the prior record of 12 feet. Today, Grave Digger is driven by David Anderson’s own children, Adam, Krysten, and Weston Anderson, and teammates Tyler Menninga and Brandon Vinson.

Max-D, formerly known as Maximum Destruction, is one of the most decorated monster trucks of all time and arguably the most striking performer active today. It debuted in 2003 with driver Tom Meents, a 14-time Monster Jam world champion who continues to be one of the most inspirational active veterans on the scene. Its silver, orange, and spike-adorned exterior embodies the truck’s apocalyptic theme and has captivated audiences so well that multiple versions of the truck were made to meet crowd needs. Meents and Max-D have together won an astonishing six Monster Jam World Racing Championships, as well as five Monster Jam World Freestyle Championships. It is currently driven by Meents and Blake Granger.

Bigfoot was the monster truck that started it all. Created in the 70s out of a Ford pickup truck by Brad Chandler, it was the first-ever monster truck, a pioneer of tricks and performances. Chandler was both a driver and an entrepreneur, performing stunts like driving over cars while showcasing and marketing Bigfoot’s capabilities through taped and live performances. Bigfoot’s popularity would later give rise to the monster truck phenomenon of the 90s when Monster Jam was created. While it is no longer showcased in the Monster Jam events as of the late 90s due to licensing disputes, fans of the monster truck world remember its history with awe and admiration.

Megalodon has been one of the most exciting newer additions to the monster truck world. A fan favorite since its splashy 2017 debut under driver Bernard Lyght, the Megalodon is a Jaws-inspired truck known for extremely ambitious jumps. It currently holds the Guinness World Record for most monster trucks (eight) ever jumped by another monster truck. A year after its debut, the Megaladon took home a memorable championship at the 2017 Monster Jam Triple Threat Series Central. In its few years of existence, Megalodon has already seen some of the most accomplished drivers sit behind the wheel, and it is currently driven by Bernard Lyght and Cory Rummel.

The Mohawk Warrior is an iconic monster truck famous for its exceptional speed and unique design. Modeled after a Cadillac Escalade with punk rock-inspired touches, the Mohawk Warrior made its debut in the 2010 Monster Jam World Finals. Its signature black mohawk was modeled after the hairstyle of its original driver George Balhan, who was known for his eccentric punk style both personally and in the monster pit in his 2010 to 2016 run as a driver. During that time, Balhan and the Mohawk Warrior set the record for the fastest speed ever traveled by a monster truck, becoming the first to go above 100 miles per hour. Bryce Kenny currently drives Mohawk Warrior.

El Toro Loco has been a spectacular mainstay in the monster truck world since its debut in 2001. Driven by Lupe Soza, it began as a remodeled version of the Bulldozer and soon developed its own character, with an orange paint job and 3-D modeled bull horns mounted on the roof. It has participated in every Monster Jam World Finals since 2003 in both racing and freestyle categories, and it took home the championship for freestyle performance in 2004. Its current team of drivers consists of Armando Castro, Elvis Lainez, Kraig Champion, and Mark List.

What is the best monster truck?

Finding the best monster truck is a subjective question with no one right or wrong answer. As a motorsport that puts spectacle and showmanship above all else, monster truck events first and foremost look to please the crowd, whether through striking designs, daring stunts, or neck-and-neck races. However, the two trucks most widely considered the most impressive and accomplished are rivals Grave Digger and Max-D, which have the most storied yet relevant resumes in the sport.

Who is the best monster truck driver?

Which monster truck has the most wins?

Pages Related to Top 6 Best Monster Trucks of All Time