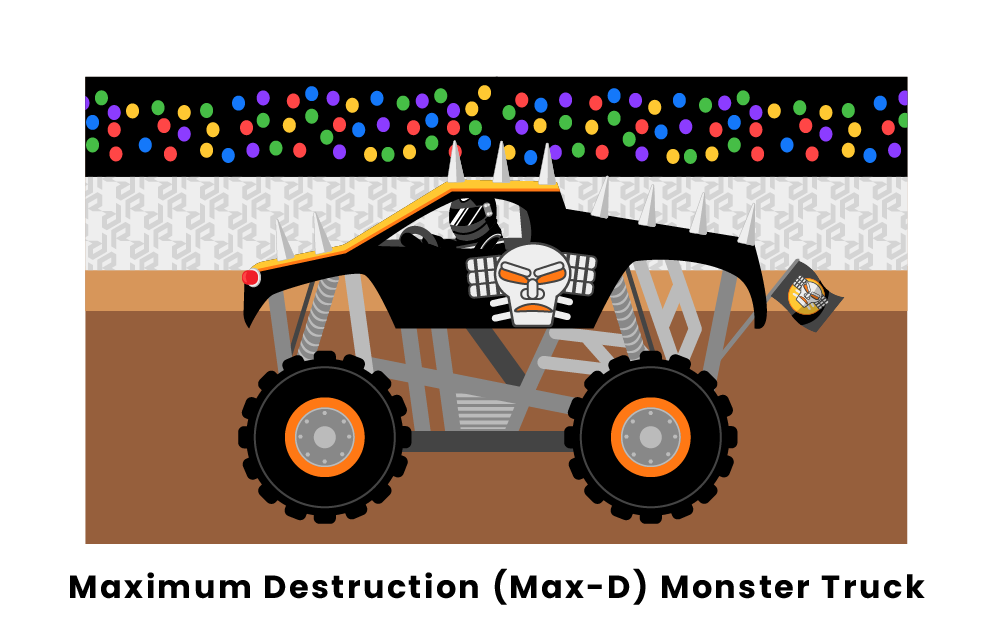 For many years, the roaring stadiums of Monster Jam have seen trucks of various designs come and go, but few have had such an impact as the legendary Maximum Destruction, also known as “Max-D.” Since 2000, this truck has elated fans with its powerful and destructive performances, winning numerous championships at the hands of its steadfast owner and driver, Tom Meents. Below, we will look at this legendary monster truck’s style, history, and achievements, examining why it is such a fan favorite.

Maximum Destruction is known for its unique body shape, paint job, and engine placement. The characteristic streamlined body mold–known as a Willman-style chassis–sports a paint job of silver, gray, and orange flames, and the 2013 update adds spikes and a large face on the truck’s sides. The truck is also known for having a rare front-mounted engine, unlike most monster trucks, which have centrally-located engines.

The monster truck which would eventually be known as Maximum Destruction was first created in 2000 by driver Tom Meents, a native of Paxton, Illinois. He had become one of the most popular monster truck drivers of all time after beginning his career in mud racing during the 1980s. Through the 1990s, Meents drove many popular monster trucks and proved his worth by defeating many famous trucks in competitions, including legends like Grave Digger, Bigfoot, and Carolina Crusher. In 2000, Meents was offered the opportunity to represent a deal between USHRA Racing (which owned and operated Monster Jam) and WCW Wrestling, which wanted to promote many of their famous wrestlers with customized monster trucks. Meents was given the chance to drive the Goldberg Monster Truck, a vehicle named for WCW Champion wrestler Bill Goldberg.

With Meents at the wheel, the Goldberg Monster Truck first debuted at the Georgia Dome in Atlanta, the home stadium of the WCW. There, Meents drove the truck to victory over all of its racing competitors and finished second in the new freestyle competition that Monster Jam had just debuted. In the Goldberg truck, Meents quickly dominated all other competition, and in both 2000 and 2001, he successfully won the Monster Jam World Finals.

After the 2001 season, the WCW unfortunately went out of business, meaning that Monster Jam could no longer use the name Goldberg for Meents’ truck. In 2002, Meents first came up with the name “Maximum Destruction,” but decided against changing his truck’s name immediately, as he believed that the name “Maximum Destruction” would be seen as disrespectful in the wake of the recent 9/11 terrorist attacks. In 2003, however, Meents finally changed the name of his truck from the “Team Meents” Monster Truck to Maximum Destruction (later also known as Max-D). The truck also received a new paint job, adopting the decals of riveted steel and orange flames that are hallmarks of the truck to this day. Max-D’s first year of racing under its new name was successful, though Meents did not manage to win another world championship just yet.

In 2004, after being eliminated in the racing championship semifinals, Meents made Maximum Destruction live up to its name in the freestyle. During the competition, Meents crashed the truck through an RV, an impact which caused a broken spindle, leaving Max-D’s right-front tire inoperable. Nevertheless, Meents pressed on, putting his truck in full gear to ram cars, perform donuts, and do other amazing stunts. Sustaining heavy damage, Maximum Destruction began to smoke and overheat, but Meents pushed his truck to the limit, until it finally stalled in a huge cloud of white smoke, leaving the crowd electrified. Meents and Max-D would share that year’s freestyle championship with the El Toro Loco Monster Truck, the only time a Monster Jam championship would be shared.

Over the years that followed, Meents and Maximum Destruction continued to grow their fanbase and win championships until Meents became the most decorated driver in Monster Jam history. Along the way, the Maximum Destruction team gained other drivers, including Neil Elliot, Phil Foster, Kreg Christensen, Morgan Kane, Colton Eichelberger, Jared Eichelberger, and Blake Granger. Between 2000 and 2022, there have been many Maximum Destruction trucks, two of which are currently in operation. The first of these is currently driven by Blake Granger, while the second is driven by Tom Meents.

Maximum Destruction is known for its extremely destructive capabilities, for its durability, and for its speed and jumping power. In particular, Max-D is famed for being able to do backflips off of certain jumps, and has on multiple occasions come close to performing a double-backflip, which no monster truck has yet been capable of.

In 2013, the tenth anniversary of its name change, Maximum Destruction was outfitted with a new, updated body that enhanced its classic steel-and-flames design. In addition to the classic silver and orange colors, the truck’s body was lined with spikes, and the image of a large, robotic face was added to the sides of the body.

What is the Maximum Destruction (Max-D) Monster Truck?

The Maximum Destruction (or Max-D) Monster Truck is a vehicle owned by Feld Entertainment and Tom Meents, which races for Monster Jam. The truck is one of the most popular and recognized vehicles in the Monster Jam lineup, alongside other legends such as Grave Digger, and has become one of the most decorated trucks in Monster Jam history, with 14 World Championships.

The two operating Maximum Destruction vehicles are currently driven by Tom Meents and Blake Granger. Tom Meents is the original driver and owner of Maximum Destruction, and has won all 14 of the truck’s Monster Jam World Championships. Other drivers on the Max-D team have included Neil Elliot, Phil Foster, Kreg Christensen, Morgan Kane, Colton Eichelberger, and Jared Eichelberger.

How much does the Maximum Destruction (Max-D) monster truck cost?

As with most modern-day monster trucks, Maximum Destruction costs around $250,000 a year to own and maintain. This cost factors in various expenses, such as maintenance of the truck’s body, engine, and other systems, fueling the truck, paying and feeding the crew, and hauling the truck to events and competitions.