How Much Do Monster Trucks Cost? 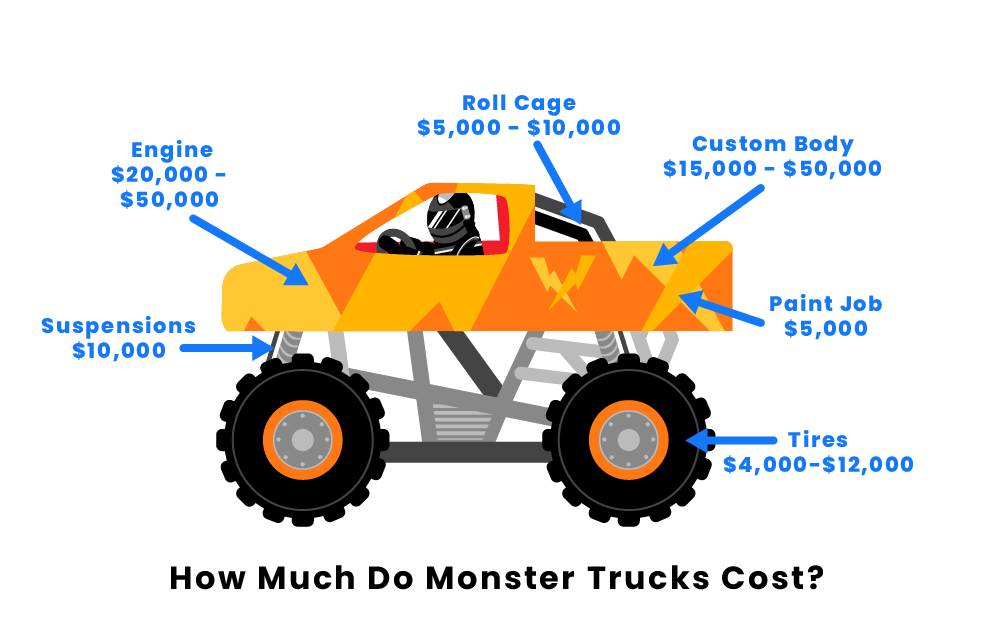 One of the most important parts of a monster truck is the body and frame of the vehicle. In addition to their size and speed, monster trucks are known for their flashy paint jobs and body shapes, with many often having bodies that are brightly painted or shaped in unique ways, such as in the form of animals. These custom-made bodies are generally constructed from fiberglass, which is extremely durable and resistant to damage. To create a custom body for a monster truck, an owner must go to a fiberglass company, which designs the body and makes a custom mold. A custom body for a monster truck can initially cost as little as $15,000 but can go as high as $50,000. Remaking or repairing damage to the body can cost between $3,000 and $8,000.

After receiving the body, the truck must be painted. Paint jobs for a monster truck will vary based upon the intended design, its detail, and the cost of the colors required. Typically, one can expect to pay around $5,000 for a monster truck paint job.

Another important part of a good monster truck is the roll cage. This metal frame protects the driver of a monster truck from injury in the event of a crash. A solid roll cage with good welding, designed for a monster truck, can cost anywhere from $5,000 to $10,000.

After the body and frame, the next most important part of a monster truck is the engine. Monster trucks use custom-built, supercharged engines, and the parts and work required to create these powerful motors are considerable. An engine alone can cost a monster truck owner between $20,000 and $50,000 to purchase or build and can often cost more.

The final major expense involved in owning a monster truck is the tires. Monster Jam requires that monster truck tires be 66 inches high and 43 inches wide. All monster truck tires have to be hand-cut due to their size, and making one tire often takes 50 hours. On average, a single monster truck tire will cost between $2,000 and $6,000, making the cost for a full set of four tires anywhere from $4,000-$12,000.

Finally, monster truck owners will require money to pay their crew and to maintain and move their trucks. A monster truck crew consists of mechanics and drivers, all of whom will need to be clothed, housed, and fed during tours. Additionally, monster trucks will require yearly and sometimes monthly maintenance as damage accrues, and also cost a lot to move via hauler trucks. Monster truck fuel adds an additional, costly expense. These expenses can total an additional $250,000 per year, though they are often partially or totally paid for by the owners of Monster Jam.

In all, when tabulating all of the above costs, a decent monster truck will cost its owner approximately $250,000-$300,000 a year, if not more. This represents an enormous investment of time, effort, and money, and thus, it is often not feasible for the average person to own a monster truck without being sponsored by a major monster truck racing organization, such as Feld Entertainment, which manages Monster Jam. Even with a major backer, monster trucks are extremely expensive to maintain.

Can you buy a monster truck?

While it is theoretically possible for anyone to buy a monster truck, doing so requires an extreme investment, often exceeding $200,000. In order to buy a monster truck that is already built, one will often have to pay its current owner at least $300,000, and this is for trucks that are up to 20 years old. For newer monster trucks, purchase prices could range as high as $600,000. Aside from the basic purchase price, one must also be prepared to maintain the truck, which can cost upwards of $250,000 a year.

What was the most expensive monster truck ever?

Pages Related to How Much Do Monster Trucks Cost?