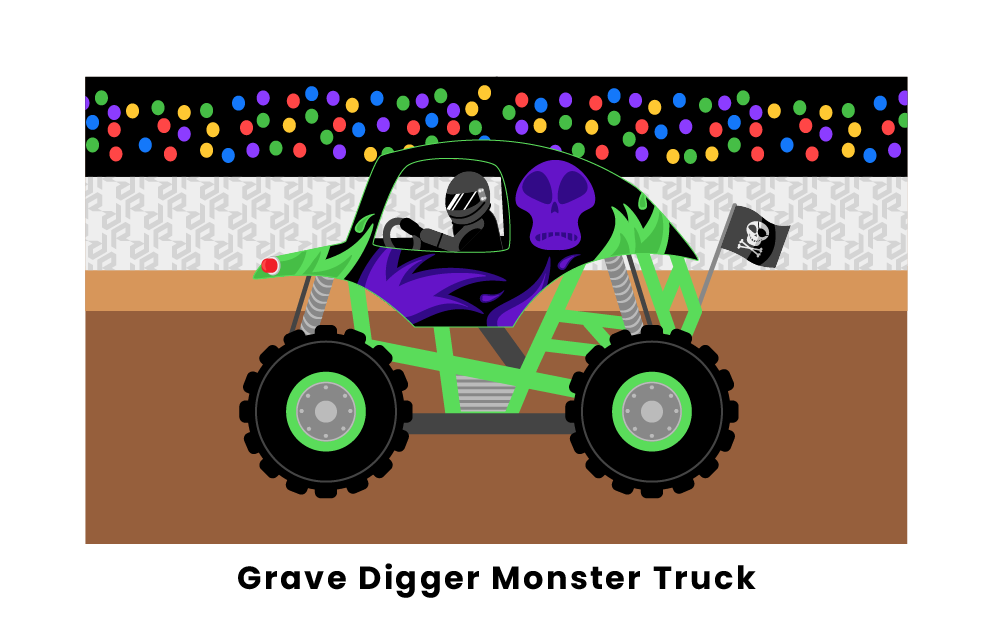 Those who are fans of monster truck racing and Monster Jam events rarely ever have to think when they are asked which monster truck is the most famous. Almost always, one name springs immediately to mind: “Grave Digger.” Since 1981, the Grave Digger monster truck has terrorized its fellow competitors on the racing course, causing spectacular damage and earning dozens of championship titles. In this article, we will take a look at the history, achievements, and facts about Grave Digger, analyzing why this monster truck is the most popular of the many powerful machines that have made their mark on Monster Jam history.

Grave Digger was created by Dennis Anderson and is currently owned and operated by his children and their team, working for Feld Entertainment. The truck’s hometown, Poplar Branch, North Carolina, is the location of “Digger’s Dungeon,” which includes a diner, thrill rides, and the ability to see multiple older iterations of the Grave Digger truck on display.

Grave Digger was first created in the early 1980s by Dennis Anderson, who built the original monster truck by lifting a 1952 Ford pickup truck body and outfitting it with mud bog tires and a small block Chevrolet engine. Initially, the truck went unnamed, but it soon gained its current name when Anderson, after receiving trash talk from competing drivers who had newer trucks, said, “I’ll take this old junk and dig you a grave with it.” Grave Digger’s first big showing was actually a happy coincidence, as Anderson was allowed to enter the truck in a competition after another truck dropped out. After causing the crowd to go crazy by crushing cars, Grave Digger was invited back to compete again.

The truck itself was updated in 1985, gaining true monster truck status when the Ford pickup body was replaced by a 1950s Chevrolet panel wagon. Famously, the rest of Grave Digger’s parts were acquired from various junkyards Dennis Anderson went to in search of accessories. These scrounged parts included the truck’s trademark red headlights, which Anderson took from scrapped school buses. Initially painted a dull orange color, in time, Grave Digger was rebranded with its now-infamous lime green and black color scheme, complete with the images of green flames, tombstones, a haunted house, and a huge ghost-shaped skull.

Grave Digger’s first major achievement came in 1987, when it defeated Bigfoot, a legendary monster truck, in St. Poodle, Minnesota. The victory caused the truck to skyrocket in popularity, and its fan base remains vibrant and massive to this day. Since the original Grave Digger of 1981, there have been a total of 41 Grave Digger trucks created and used by the Anderson Team. Of these, nine remain in competition, while others have been retired, scrapped, sold, or put on display.

Grave Digger is one of the most decorated monster trucks in America, having won numerous competitions on the Monster Jam circuit and elsewhere. While driven by Dennis Anderson, Grave Digger won four Monster Jam World Finals, two for racing and two for freestyle, capturing them in 2000, 2004, 2006, and 2010. Since Anderson’s retirement, Grave Digger has won three more Monster Jam World Finals, a racing title with driver Morgan Kane in 2016, a freestyle title in 2016 with Adam Anderson, and another racing title in 2018 with Adam Anderson.

In addition to its World Finals wins, Grave Digger has won:

Due to its unique body shape and wheels, Grave Digger is known for its aggressive driving style, which commonly results in exciting crashes and damage to various obstacles on the racing course, such as junked cars. Grave Digger is known for having a huge fan base in the world of Monster Jam and for having created an aura of intimidation and excitement that surpasses all other monster trucks of its time. Part of this atmosphere comes from the truck’s signature red headlights, which were originally scavenged from scrapped school buses. Due to its popularity, Grave Digger has become the unofficial symbol of Monster Jam events. As such, it is often the last truck to perform at Monster Jam competitions, serving as a main event for the audience.

What is the Grave Digger Monster Truck?

Grave Digger is a monster truck owned by Feld Entertainment and the Anderson Family and is one of the most famous monster trucks in America. The unofficial symbol of Monster Jam, Grave Digger is one of the most decorated trucks in the Monster Jam lineup, with seven Monster Jam World Finals wins and numerous other accolades. The truck is known for its red headlights, its paint job of black-and-green flames, and its aggressive, destructive style.

How much does the Grave Digger monster truck cost?

Like most of its fellow monster trucks, Grave Digger is extremely expensive to operate and maintain. Based on estimates regarding parts, gasoline, and repairs, Grave Digger costs around $250,000 to build and operate, though costs can range from $100,000 to $300,000 or more, depending on prices. These costs include the actual building of the truck, operating it in competitions, gasoline, and repairs to any damage the truck may sustain in the rough conditions of the course.