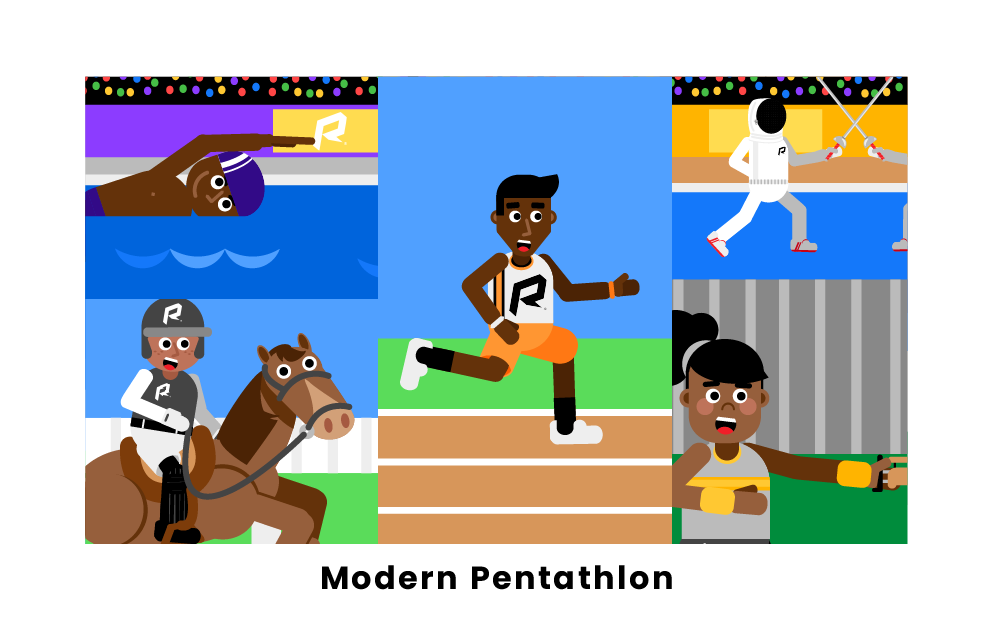 The modern pentathlon combines 5 very unique skill sets all into one physically and mentally taxing event. It made its debut at the modern Olympic Games in Sweden in 1912, introduced by Baron de Coubertin. Inspired by a French legend, the event consisted of 5 areas including fencing, swimming, horse riding, pistol shooting, and running. Ever since, the modern pentathlon has been featured in the Summer Olympic Games with a few developments along the way. The most notable is the implementation of the Laser-Run, which combines the running and pistol shooting into one thrilling and deciding event. 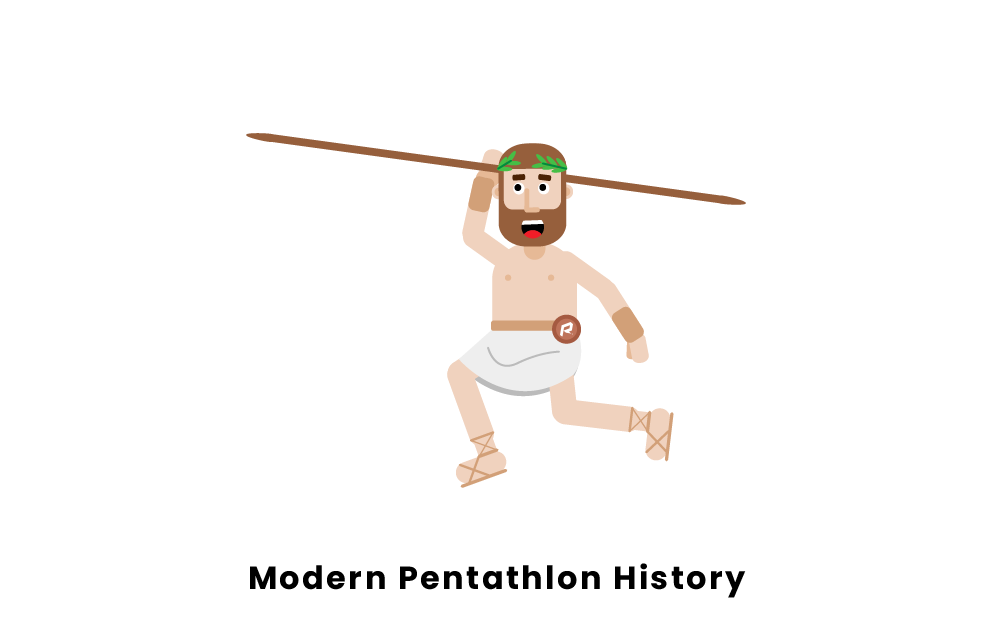 The modern pentathlon is a sport that has been developing for thousands of years.  Beginning in Ancient Greece, the pentathlon used to be the most anticipated event of the Olympic Games. During that time, the event featured the 5 disciplines of running, jumping, wrestling, discus, and a form of javelin. However, it is said in the 1800s that a French soldier was tasked with delivering a message over a considerable distance. To do this, he had to ride a horse, fight with a sword, swim, run and use a gun to complete his journey. It was from this legend that the modern pentathlon was born. 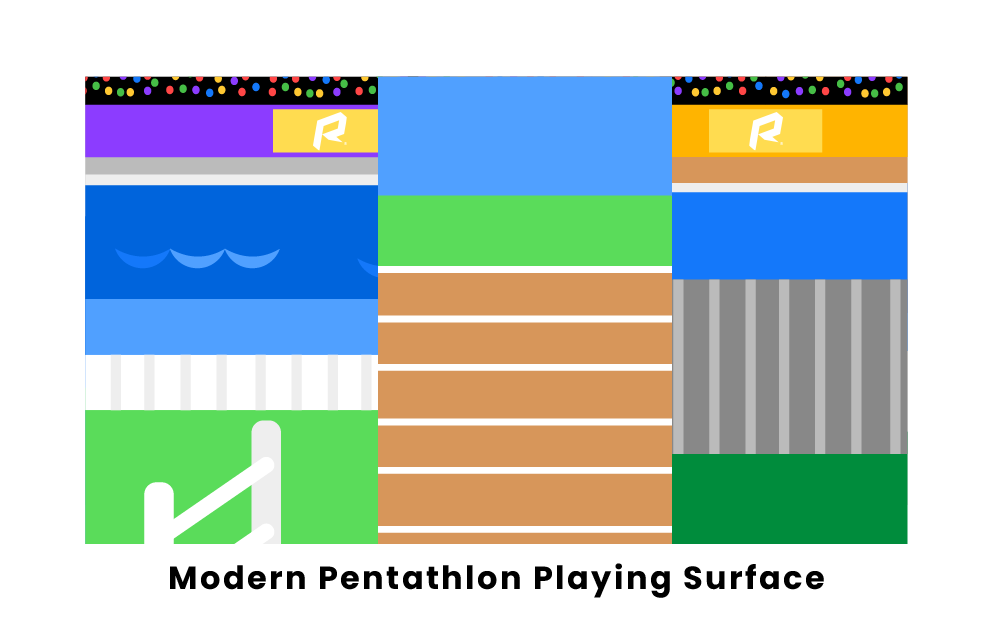 Since the sport boasts such a unique combination of events, the playing surface for the modern pentathlon cannot just be one area or surface. In fact, all 5 disciplines of the sport require their own setting or area to be completed. 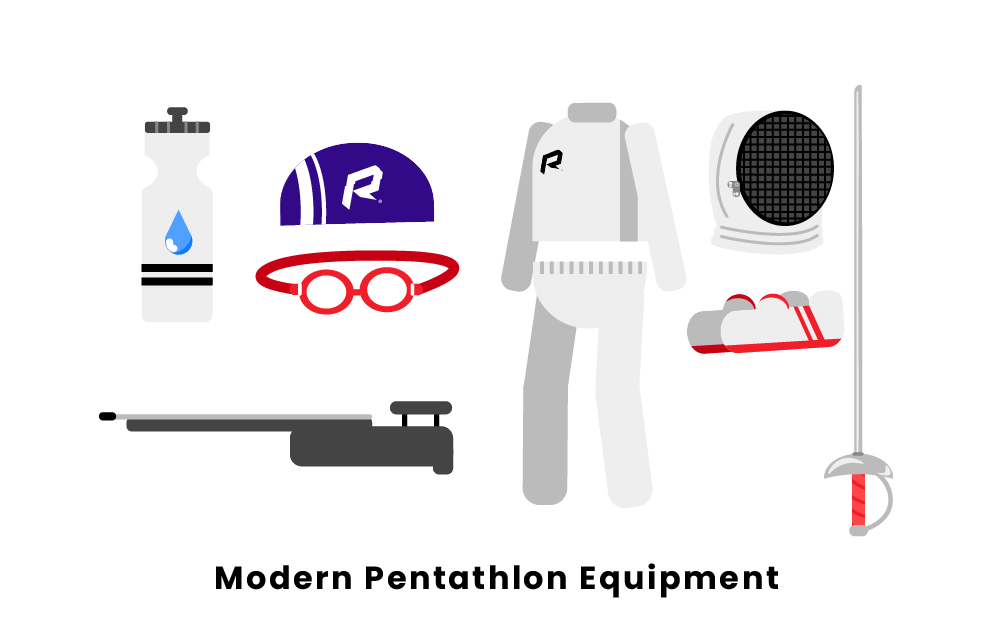 Because the modern pentathlon essentially combines 5 entirely different sports, each section of the event requires its own unique set of equipment. Unfortunately, this can make the sport fairly expensive to try if you wish to fully embrace it. Here is a brief equipment list for the disciplines of the modern pentathlon. 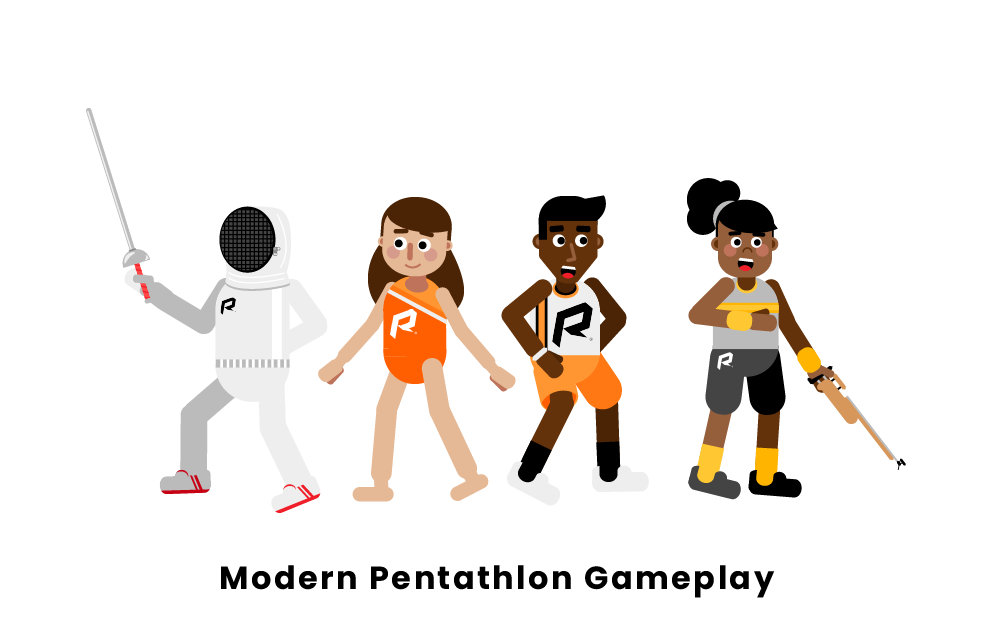 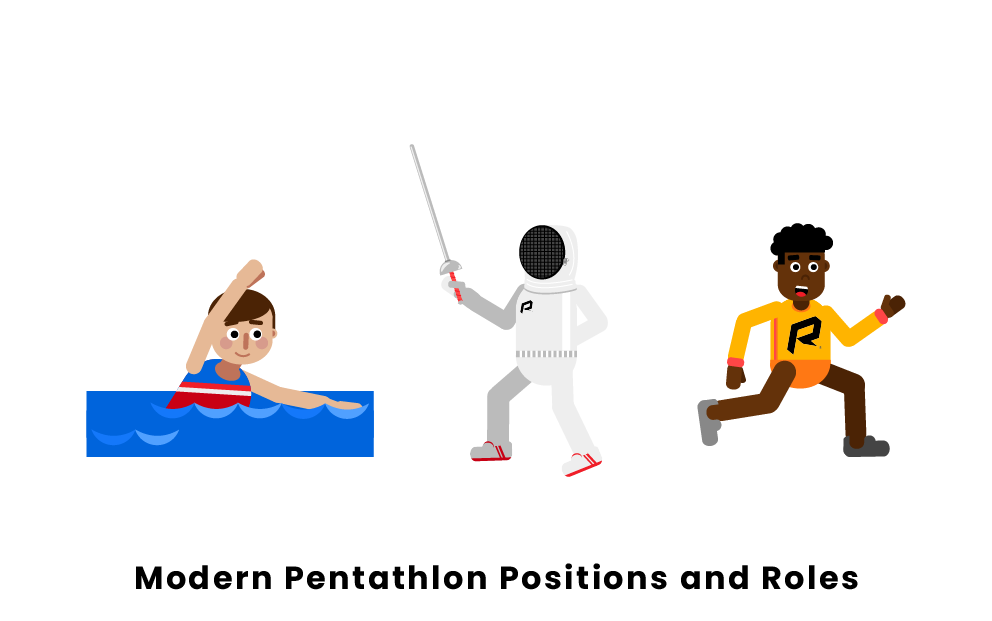 The modern pentathlon is an individual sport, so there are not really specific positions and roles for athletes. However, the modern pentathlon did for some time become available as a team sport, but this was discontinued in 1996. The only types of roles that are taken are the different events the athletes must compete in, which call for very different skills and training. These roles include fencing, swimming, horse-riding, shooting, and running. 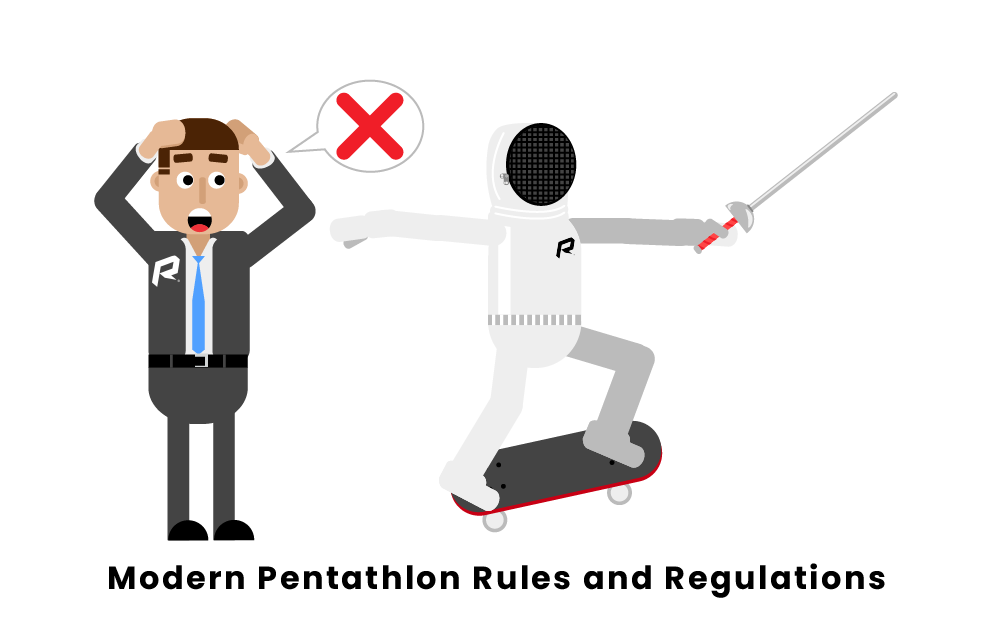 In the modern pentathlon, each of the 5 disciplines has their own set of rules that must be complied by all athletes competing. Some of the events’ guidelines are pretty self-explanatory, but the others are not quite as obvious.

First, in epée fencing, the sword may not have a curve longer than 1cm, and fencers may only strike after the command for play and before the command for halt. Any violation results in a penalty.

In swimming, the starting dive underwater may last no more than 15m, then the swimmer must appear above the water.

In the equestrian event, proper dress code must be followed.

Finally, in the laser-run, athletes must shoot their own target and may not start running before meeting the minimum shooting time. 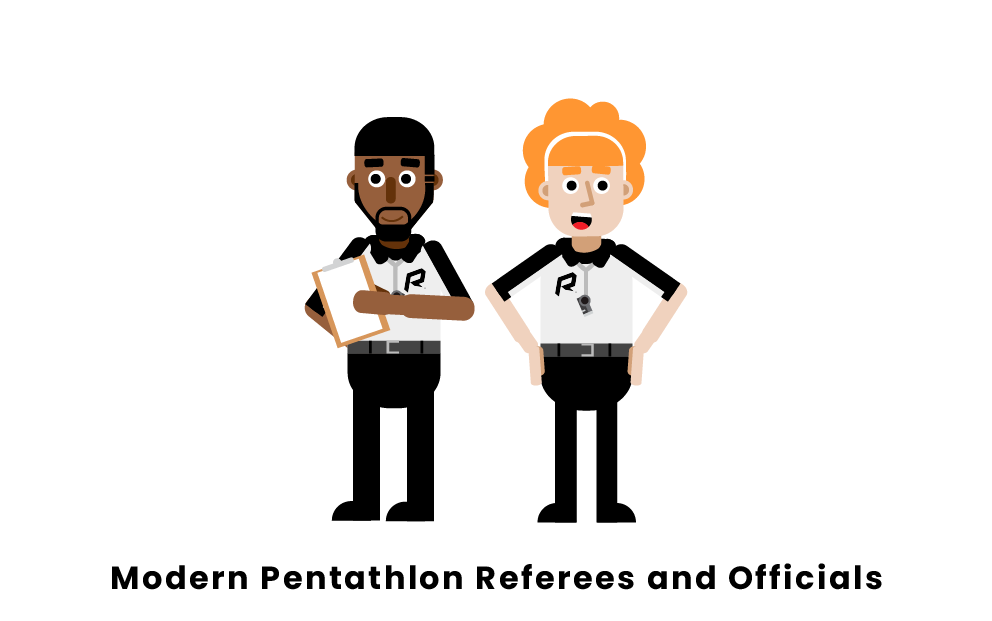 While the modern pentathlon is scored by a derived point system without the need of judges or scorers, the presence of referees and officials remains necessary to ensure the event is run smoothly and within the rules. Modern pentathlon referees and officials serve the role of assessing all forms of fairness and justice during competition, including but not limited to the giving of penalties and disqualifications. Under UIPM rules, there may be no more than 2 referees per national federation per gender. 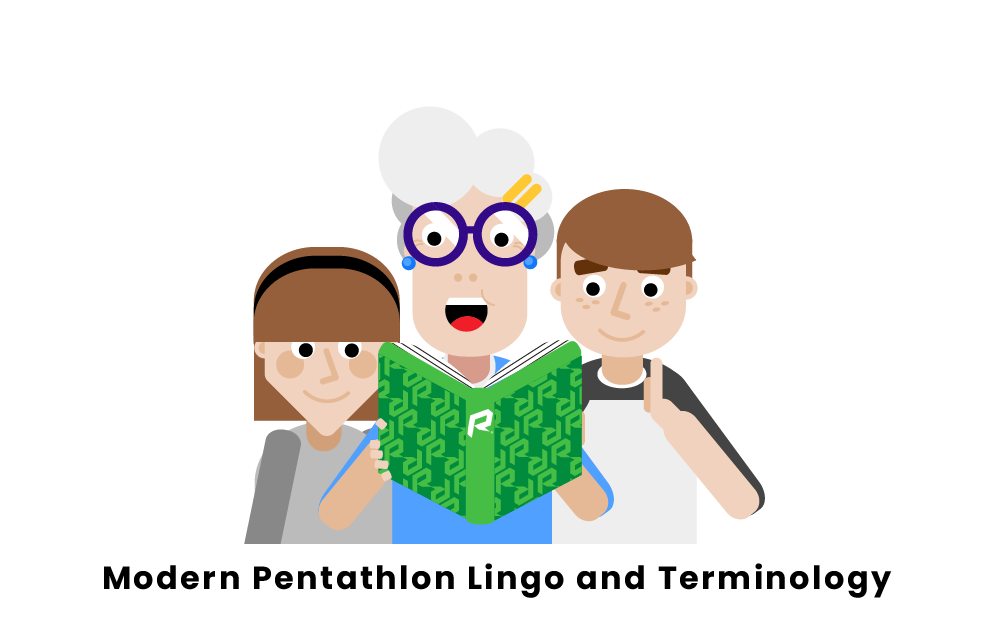 With so many different events involved, there are several terms and slang involved with the Modern Pentathlon that are important to know to best understand the full essence of the sport. It is important to keep track of these terms to be able to appreciate the details of this unique combination of sporting endeavors. Listed below are some lingo and terminology that will help you better understand the modern pentathlon. 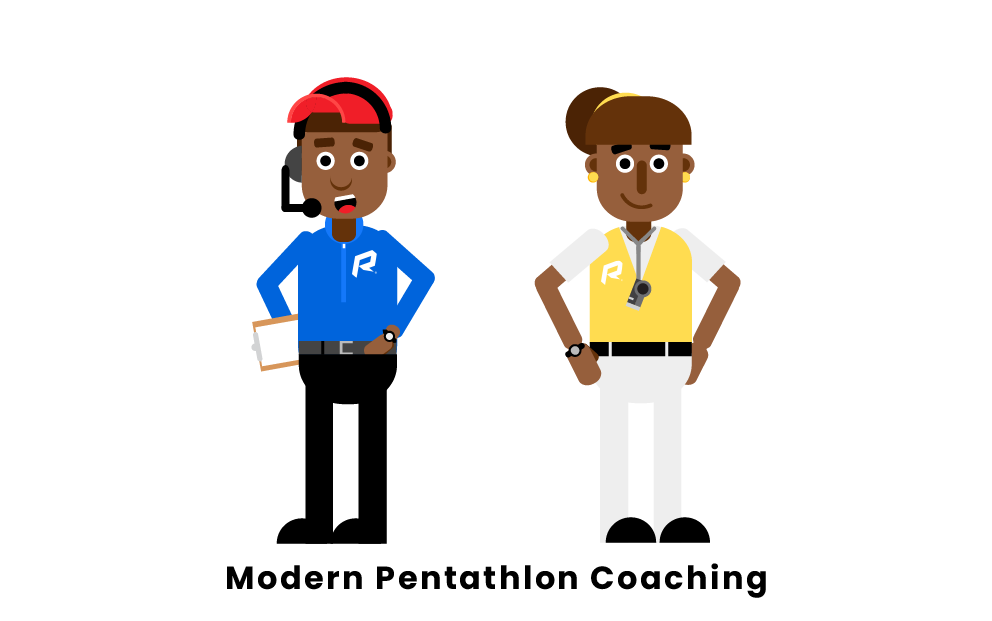 Coaching modern pentathlon presents a unique challenge that few choose to take up. For this, the coaches should be greatly respected for their knowledge and hard work. The UIPM has multiple training programs for coaches and there are 4 different levels of certification for coaches in the sport. The first level is Development Coach, followed by Coach. Level 3 is Senior Coach, and Level 4 is Elite Coach. 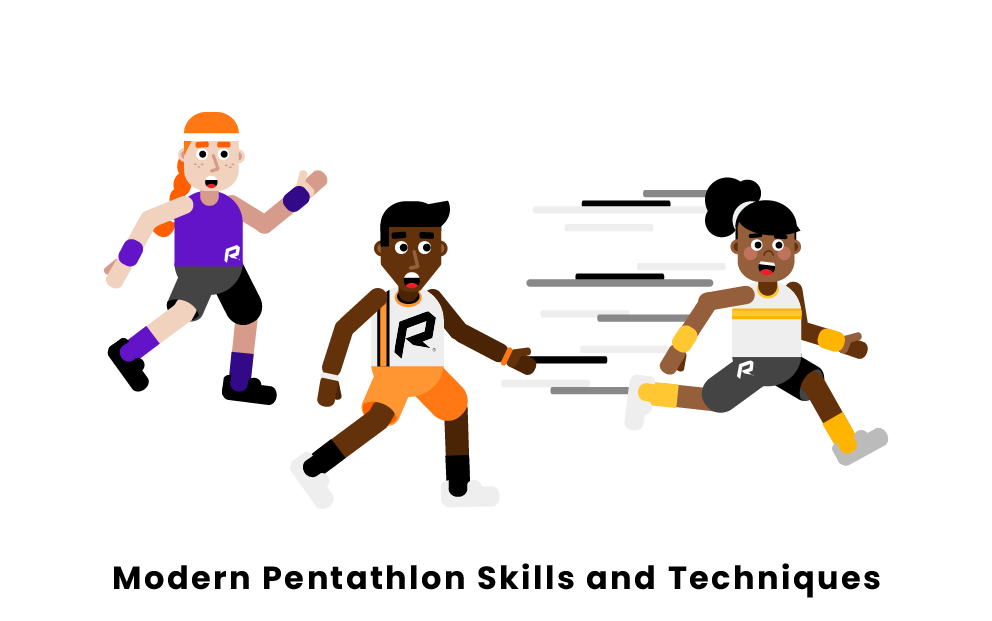 Since the modern pentathlon features 5 separate disciplines as 4 entirely different events, applying smart technique and being skillful is vital to succeeding in the sport. First and foremost, the sport calls for excellent stamina and tremendous mental and physical strength. The combination of events can be grueling and fatiguing as it only takes place in a day’s time. That being said, putting in the right amount of effort is crucial to being able to excel in your strongest events. For some, it may be smart to take your time to ensure proper form in one event so that you can flourish and dominate in an event in which you are more comfortable. 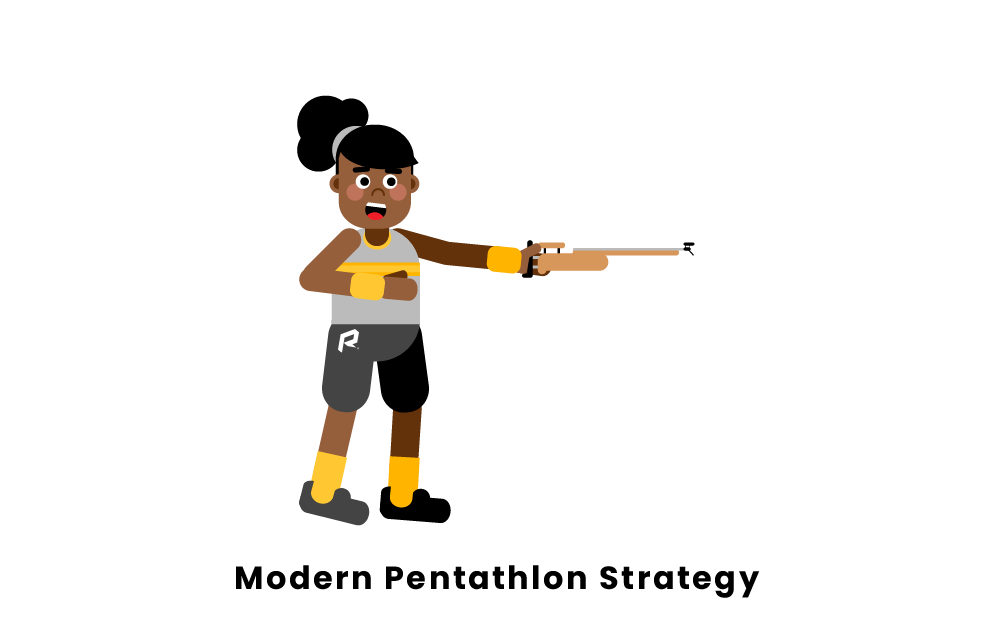 The modern pentathlon presents a unique challenge of multiple disciplines to determine the strength, grit, endurance, stamina and skill of a daring athlete. In the modern pentathlon, the first three events determine your head-start or time behind the leader for the placement-deciding laser-run event. So, in the first three events, athletes focus on doing what they can to get the highest cumulative score they can. If an athlete is particularly skilled in the laser-run, then they have some room for mistakes or taking it slower in the seeding events. On the other hand, if an athlete tends to struggle in shooting or running, they must be sure to perform their very best in the first three events to make up for the decisive laser-run. 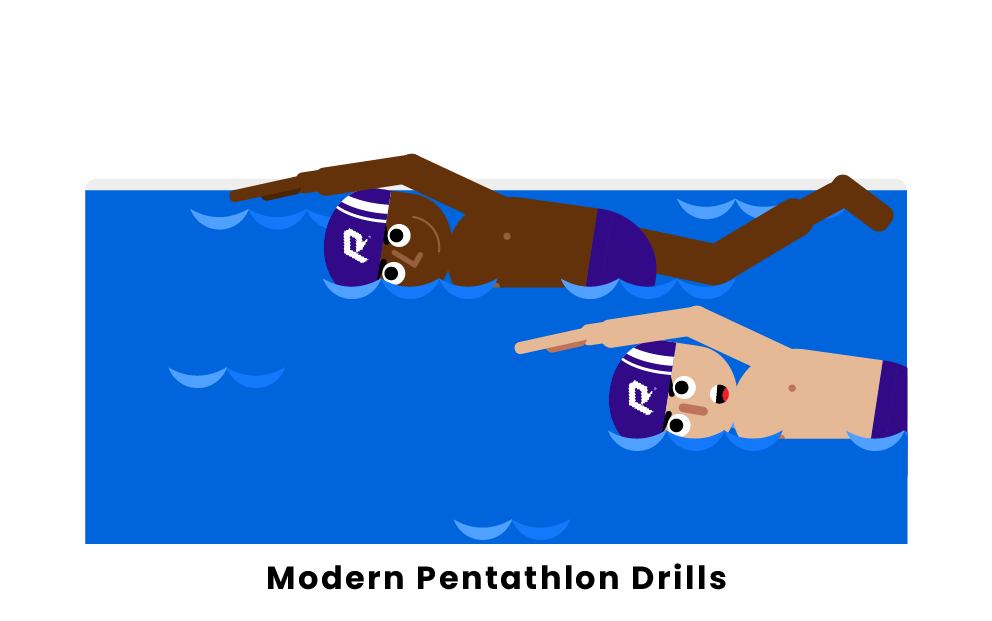 Training for the modern pentathlon is no simple routine. With essentially 5 different sports combined into one, modern pentathletes must have a training program like no other. There are different drills and training methodologies that can be useful to mastering the sport.

For fencing, you should practice footwork and mentality. It is also important to be able to move on from losses, since there are so many bouts during the fencing event. In running and swimming, endurance is key and training is pretty straight-forward. To swim better, swim a lot, and to run faster, run a lot (but not too much). Finally, to improve your equestrian skills, practice riding with unfamiliar horses. This is probably the trickiest part of the event, as you only get 20 minutes to prepare with a horse you have never seen before. 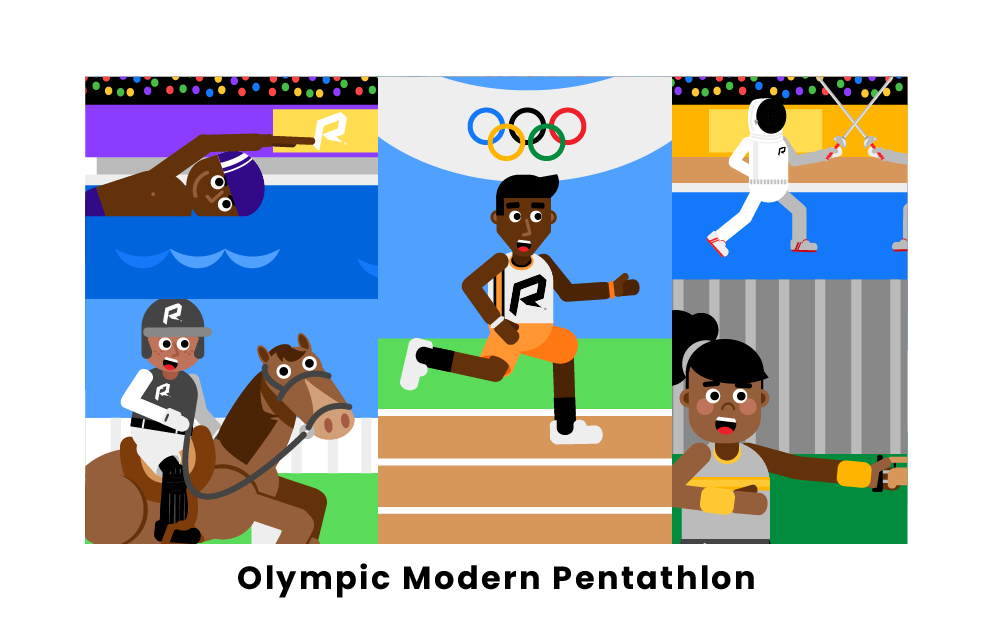 The modern pentathlon used to be the pinnacle of the ancient Olympic Games. However, the unique sport made its modern comeback in the 1912 Olympic Games in Stockholm, Sweden. In the majority of its Olympic presence, the events took place over 4 to 5 days, giving athletes considerable rest between events. After 1980, all 5 events have taken place in just a single day. This has made the sport much more exciting for the spectators and challenging for the sport’s top athletes. In the 2012 London Olympics, the laser pistol was introduced to the Laser Run event. This creates a safer and more environmentally friendly alternative to lead bullets. 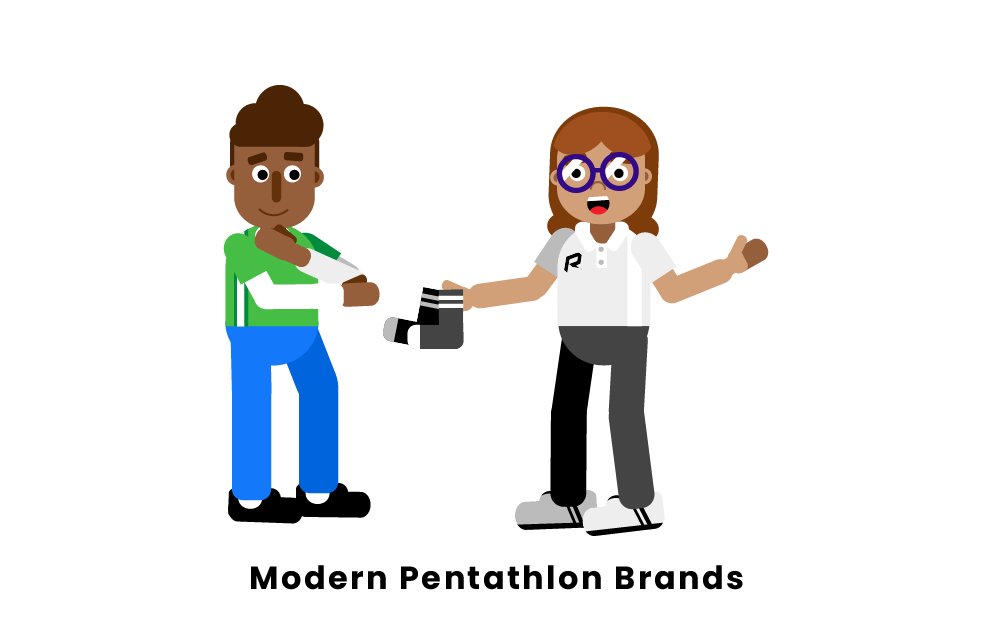 The modern pentathlon involves 5 entirely different types of athletic events, and thus has very different equipment and brands that are best suited for performing at your best. The best brands for modern pentathlon give athletes the flexibility and safety needed for this unique sport. Listed here are a few of the top brands for the sport. 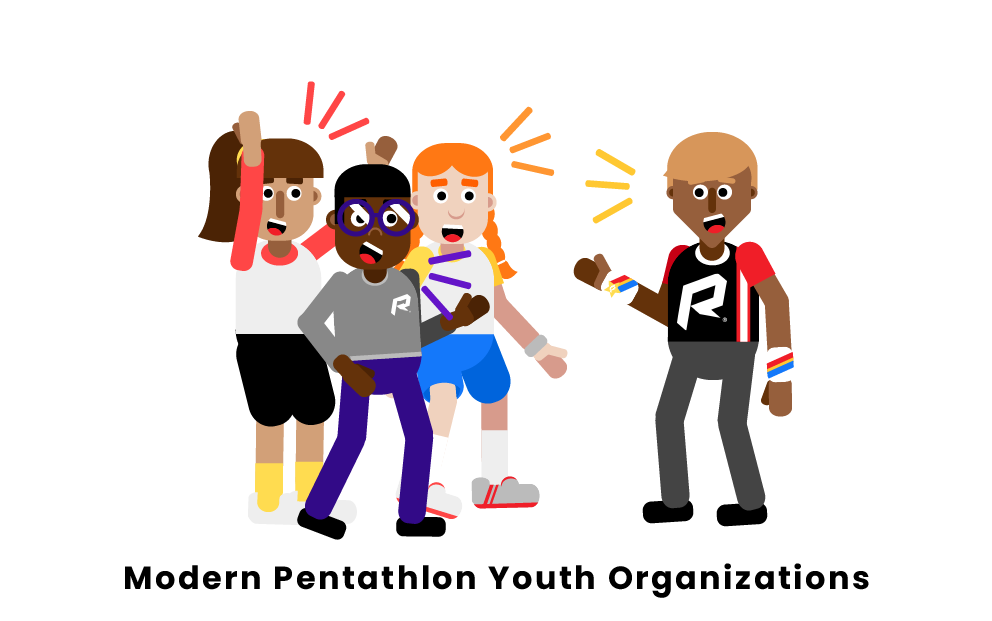 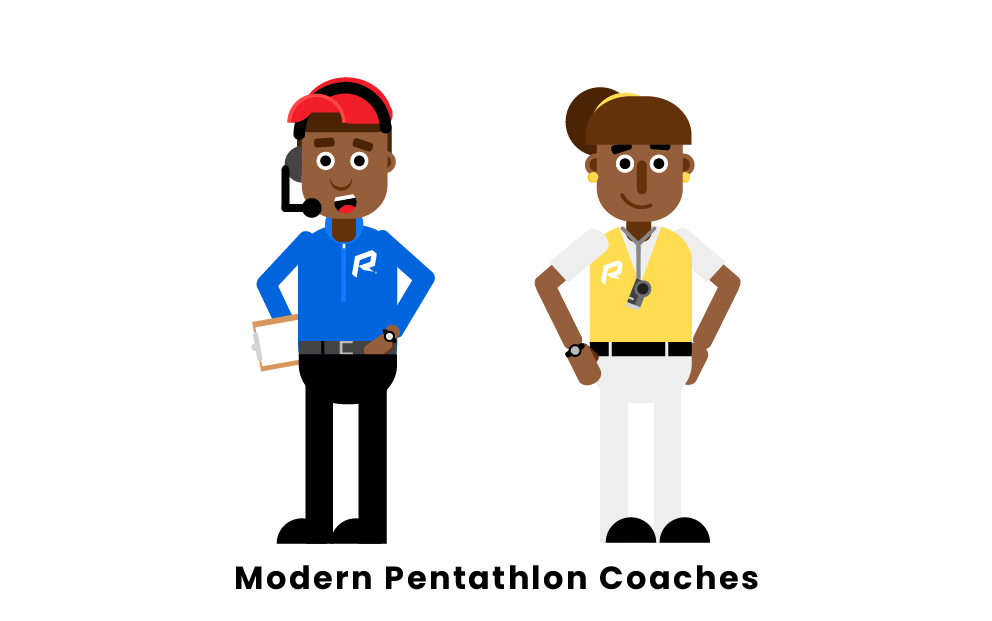 It is one thing to master the 5 unique disciplines of the modern pentathlon, but an entirely different feat to be able to understand, develop and train an athlete in this sport. Requiring 5 very distinct skills, the modern pentathlon is no easy feat to coach or play. So, it is important to recognize the coaches of some of the best athletes for all of their hard work to develop the world’s best pentathletes. 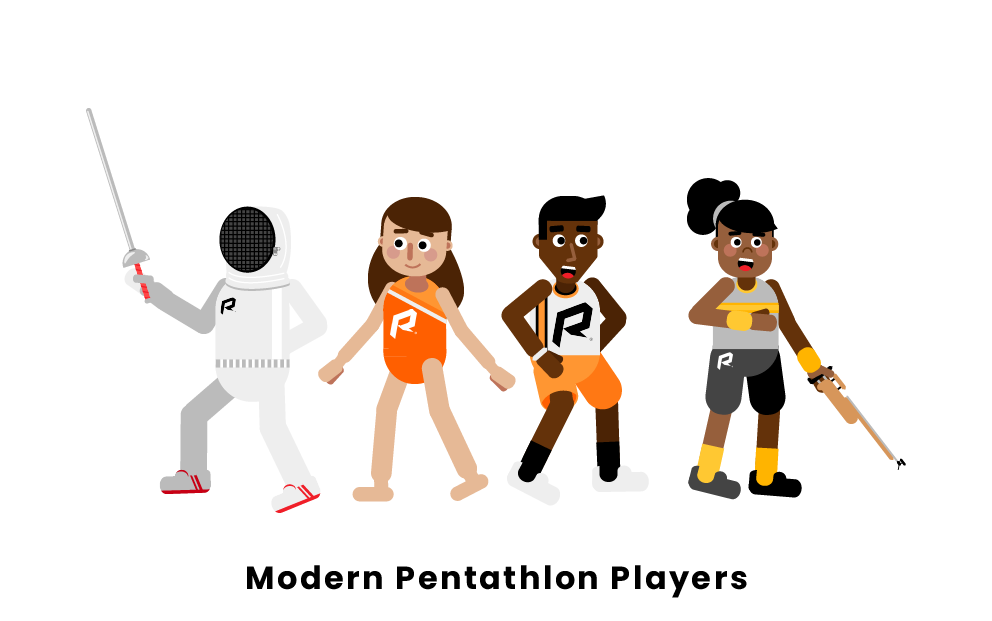 To become the among the greatest on the planet in the modern pentathlon is an incredible feat, calling for the mastery of 5 separate disciplines. Very few people or athletes even attempt to train in more than 3 of these unique events, so practicing all 5 is already an amazing skill by itself. The best modern pentathletes find themselves winning world championships, Olympic Games, and other competitions that determine the best of the best. Here are a few of this sport’s best athletes around the world. 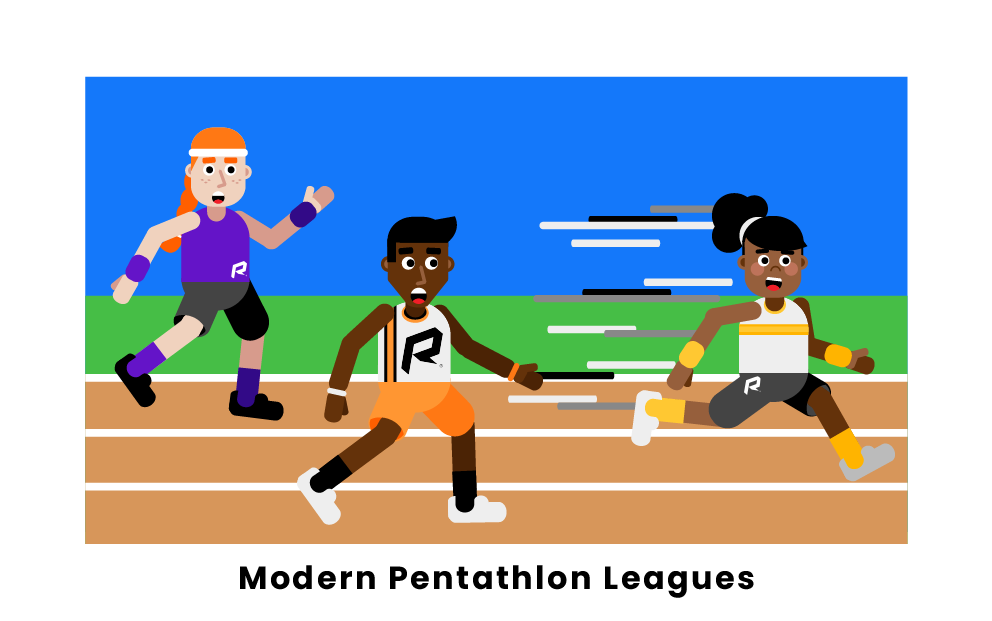 Modern pentathlon is officially governed by the Union Internationale de Pentathlon Moderne, or the UIPM. This organization is the largest of its kind within the sport, and serves as the official governing body for the sport. However, there are other smaller leagues and organizations that help run and coordinate modern pentathlon events around the world. 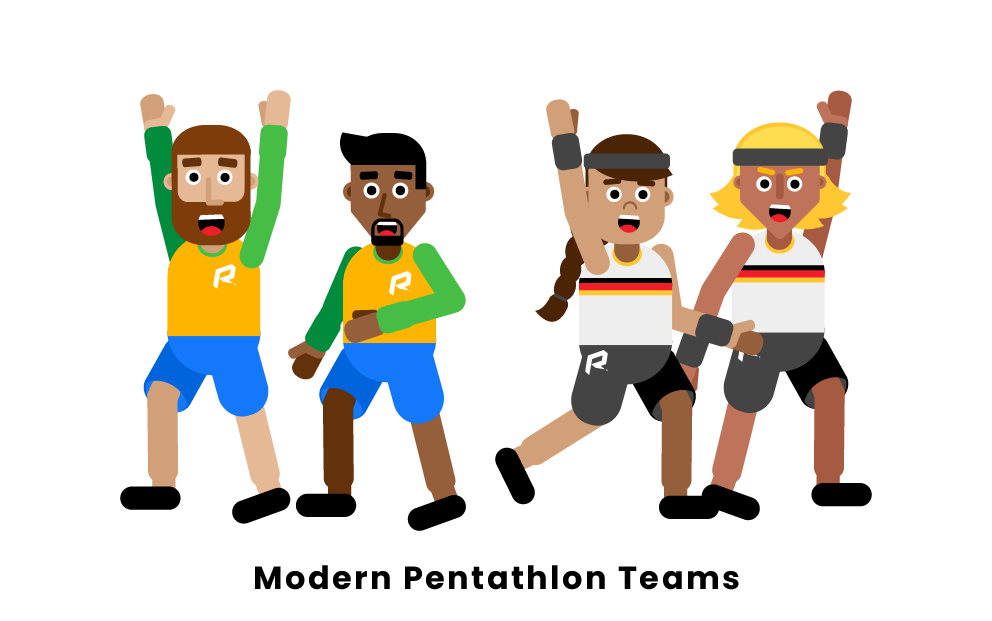 The modern pentathlon has always been dominated by European athletes and nations. In fact, Sweden alone have won 9 gold medals at the Olympic Games in the men’s sport. The women’s side of the sport has also been dominated by European nations, but has been more diverse in the specific winners. Listed below are the most successful teams in the modern pentathlon according to the number of Olympic Medals they have won. 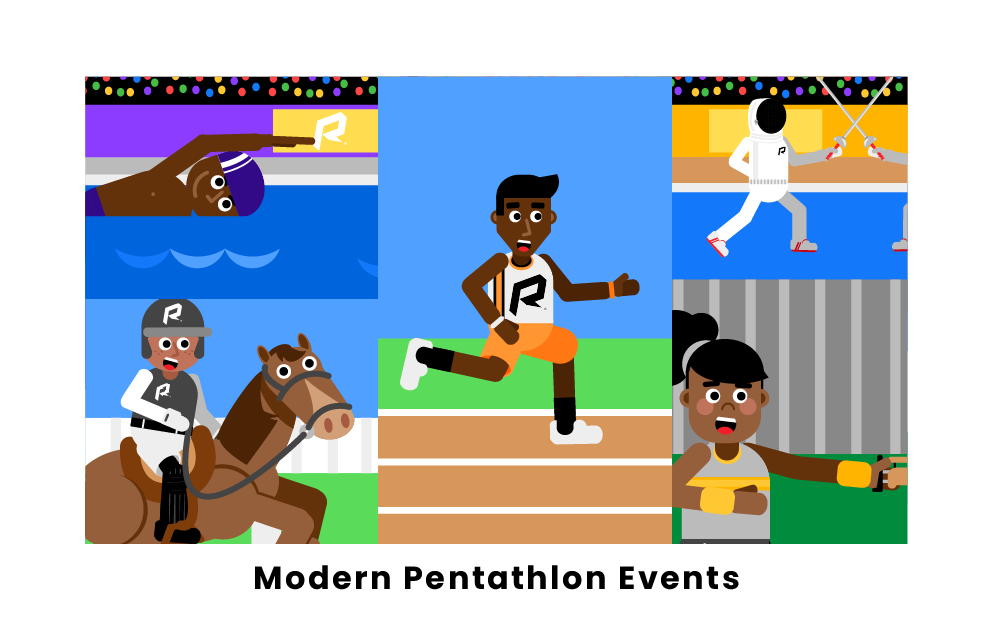 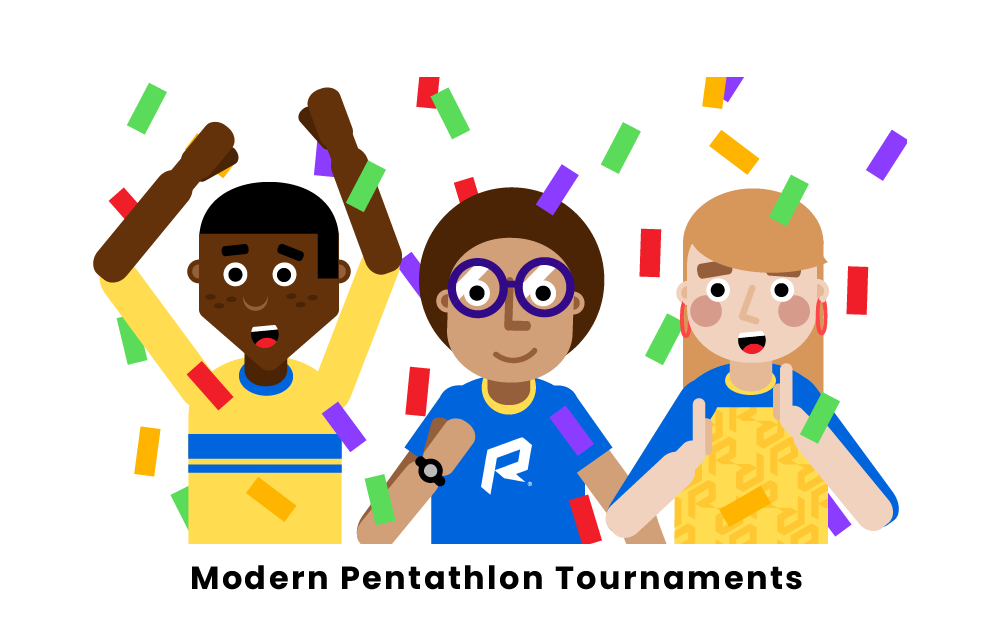 Under the Union Internationale de Pentathlon Moderne (UIPM), there are 3 different types of official tournaments, labeled categories A, B, and C. These tournament levels represent the hierarchical pyramid of modern pentathlon tournaments around the world. Listed below are the categories of tournaments and their respective levels. 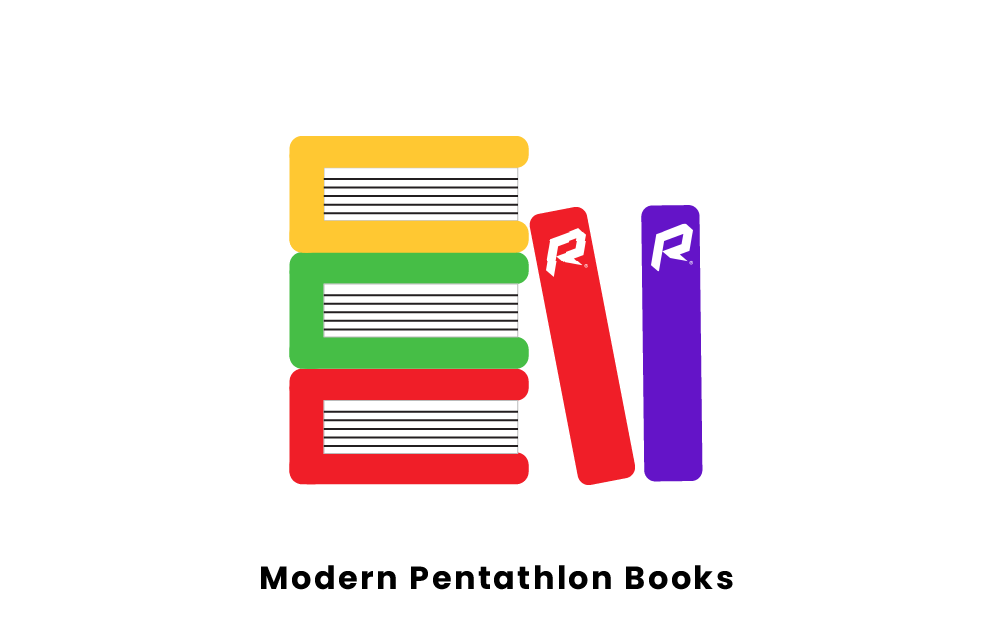 While it may be a lesser known sport, the modern pentathlon is something that has developed over a great deal of time and has been studied and mastered by many. From this research and development has come many books about sport, including tutorials, history, champions, stories and many more. Listed below are some great books concerning the modern pentathlon. 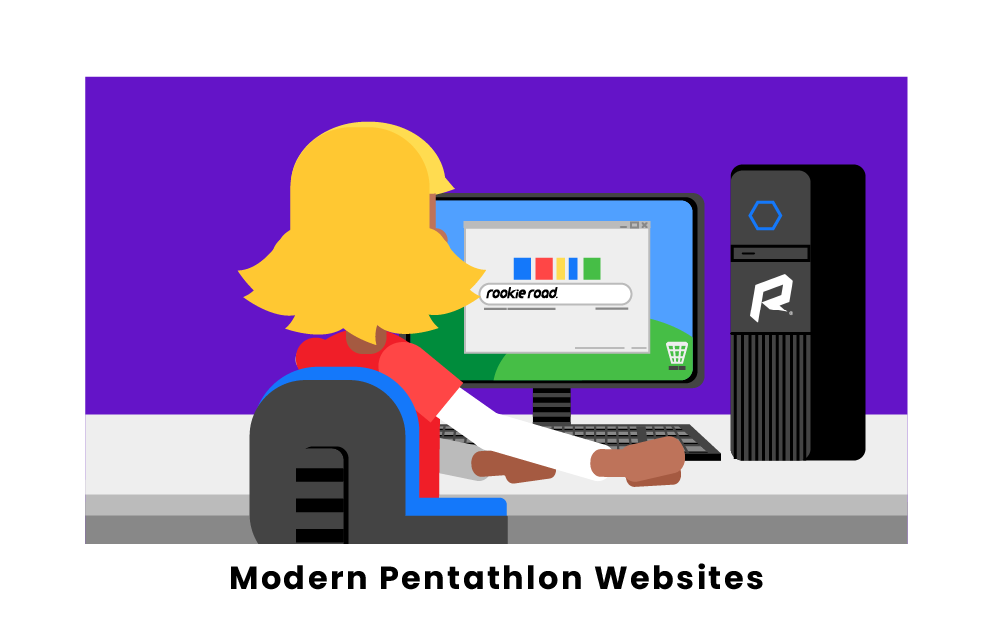 Being a lesser known sport, it is important to know how to find out more through some of the official websites dedicated to the promotion and coordination of the Modern Pentathlon today. There are several websites available to anyone who wishes to look even deeper into this unique sport, some of which are provided below.

What does modern pentathlon consist of?

The modern pentathlon consists of 5 disciplines which include fencing, swimming, show-jumping, shooting, and running. Today, the shooting and running are combined into one event called the Laser-Run.

When did the modern pentathlon begin?

The modern pentathlon debuted at the 1912 Summer Olympic Games in Stockholm, Sweden. It has since seen some modifications but has stayed true to the 5 disciplines.

Who invented the modern pentathlon?

The modern pentathlon was introduced by a renowned Frenchman, Baron de Coubertin in 1912. He believed that mastery of this sport would create a complete athlete.

How do you play modern pentathlon?

To attempt to complete the modern pentathlon, you must develop a unique skill set of the 5 different disciplines that make up the sport. This will take great practice, especially in the fencing, horse-riding, and shooting events.

Pages Related to What is Modern Pentathlon?