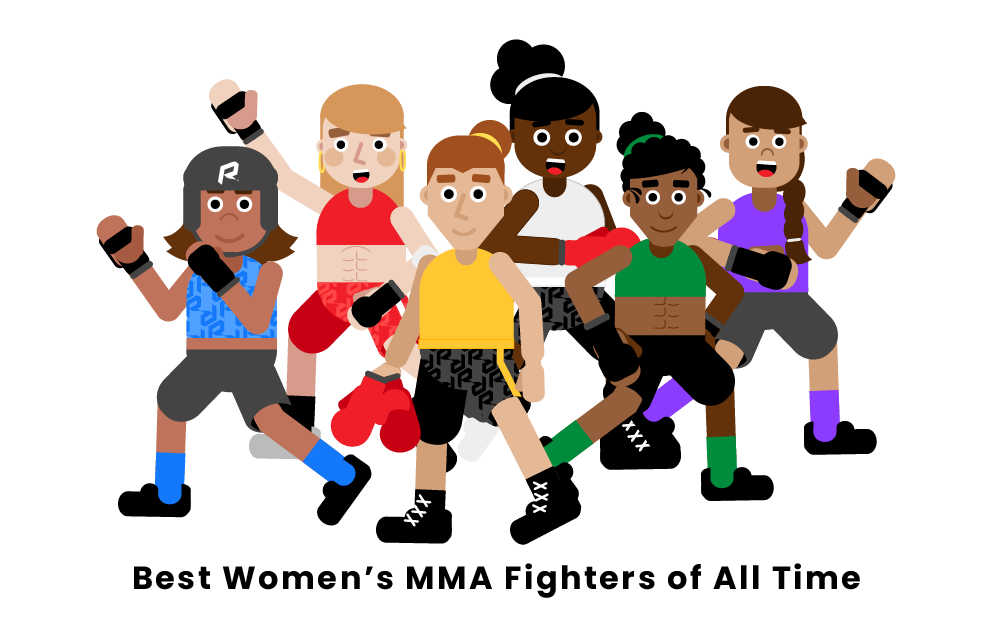 The sport of mixed martial arts has acquired great popularity in the last two decades, rapidly becoming one of the most-watched sports in the world. This fast growth is due to the greatness shown by the fighters. In women’s MMA, a few legends have stood out above the rest; here are the top six best women’s MMA fighters of all time.

Who are the best women’s MMA fighters of all time?

Amanda Nunes came to the rise in 2016 when she defeated Shayna Bazler to start her twelve-fight winning streak. Before that, Nunes, who used to compete in Strike Force and Invicta FC, had a 3-2 record in her first five UFC fights. After that win in 2015, the Brazilian fighter went on arguably the most dominant streak in women’s MMA history, defeating top fighters such as Ronda Rousey, Valentina Shevchenko, and Holly Holm. Although she suffered an upset loss against Julianna Peña in 2021, it seems Nunes will continue to dominate the MMA world going forward.

Number two on the list of the greatest women’s MMA fighters of all time is occupied by another Brazilian, Cris Cyborg. After a loss in her first fight in 2005, Cyborg went on a dominating rampage that led her to 21 straight wins, five of which came in the UFC, including a win at UFC 219 against Holly Holm. Her first UFC loss, and only the second in her whole career, came in 2018 when she lost by knockout in less than a minute in the highly anticipated bout against fellow Brazilian Amanda Nunes. She racked up another five wins following that loss, bringing her career record to 25-2.

Widely acclaimed as one of the most influential athletes of the 21st century, Ronda Rousey is a true icon of mixed martial arts. Her first fights came in Strikeforce, where she racked up six wins, becoming the bantamweight champion. In 2012, Rousey became the first woman fighter to sign to the UFC, where she quickly started dominating the scene. She won six fights between 2013 and 2015, making her case for the greatest women’s MMA fighter of all time. However, after her losses to Holly Holm and Amanda Nunes, Rousey decided to join the WWE, where she fights with the name “Rowdy.”

Similar to Cris Cyborg, Joanna Jędrzejczyk comes from a Muay Thai background. Before entering the UFC in 2014, Jędrzejczyk won five Muay Thai World Championships representing Poland. This discipline, which uses stand-up striking, involves the use of almost every part of the body. This has helped Jędrzejczyk to become an explosive fighter, winning ten of her fourteen fights in the UFC Strawweight class. Throughout her eight-year career in the UFC, Jędrzejczyk has defeated great fighters such as Jessica Andrade and fellow Polish Karolina Kowalkiewicz.

Unlike the other fighters on this list, Marloes Coenen is the only one that has never competed in the UFC. The Dutch fighter competed in the Strikeforce and Invicta FC for eight years before her retirement in 2017. Coenen started her career in Strikeforce competitions with a win over Roxanne Modafferi in 2009, before moving to Invicta FC and Bellator. While she did not obtain great success in these two competitions, Coenen was able to win three fights in Strikeforce, which added to her wins in the previous year, giving her an overall career record of 23 wins and 8 losses.

Still fighting after 22 career wins, Valentina Shevchenko is widely considered the greatest women’s MMA fighter in the flyweight class. Shevchenko is tied with Katlyn Chookagian for most UFC Women’s Flyweight Division titles. The half-Peruvian fighter started competing in her native Kyrgyzstan before moving to the UFC in 2015 when she won her debut fight. Since joining the UFC, her record has been 11 wins and 2 losses, both of which came against Amanda Nunes. Shevchenko also competed in boxing fights in Peru, as she is a Peruvian citizen.

Who is the greatest women’s MMA fighter of all time?

What female UFC fighter has the most overall wins?

With 21 wins, 14 of which in the UFC, Amnda Nunes is the winningest female UFC fighter. Her 14 fight win streak started in August 2013 and ended in December 2021, when she lost the bantamweight championship to Julianna Peña. During this eight-year span, Nunes has defeated all-time greats such as Ronda Rousey, Holly Holm, and Valentina Shevchenko (twice), making her case for the greatest women’s MMA fighters of all time.

What women's MMA fighter has the most wins in title bouts?

Amanda Nunes’ nine wins in title bouts is an all-time record for women’s MMA and is also tied for fifth all-time in overall UFC competitions, including men’s too. These include wins in both the featherweight and bantamweight classes, as Amanda Nunes is the first woman to become a champion in two UFC divisions and to hold titles in two weight classes simultaneously. This record is shared with only Conor McGregor and Daniel Cormier.