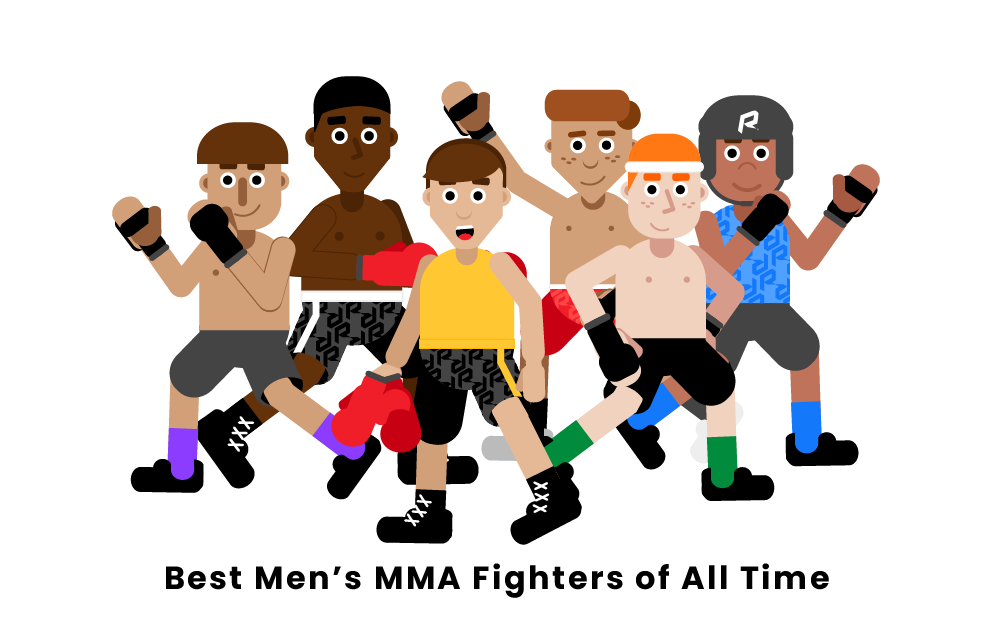 MMA is a fast-growing combat sport in the US, with its first recognized competition, UFC, debuting in 1993. Since then, it has become one of the most-watched sporting events and provides entertainment like no other sport. Here are the six best men’s MMA fighters of all time.

Who are the best men’s MMA fighters of all time?

One of the most impressive and entertaining fighters of the last decade, Jon Jones, has undeniably put himself in the sport's upper echelon. With a wrestling background, his takedown skills were unparalleled, and his ability to use his southpaw fighting style to his advantage gave his fights a unique flair. His sense of style always left spectators wanting more. Jones’ success is shown in spades through his 26-1-0 record, with his only loss to date coming via disqualification in December 2009. This was very controversial as he was disqualified due to a technicality regarding an elbow strike.

Khabib Nurmagomedov is a retired Russian mixed martial artist who, from 2012-2020, went an astounding 29-0-0 and held the lightweight division title for almost three years. Khabib trained in Serbia, Russia, where he grew up and went viral for a training video featuring him wrestling a bear during training. He then dramatically started his career at age 17 by taking the UFC world by storm with six victories over his first year being a pro. Khabib continued this dominance over his career as a lightweight fighter, evident by his varied ways of winning including, eight knockouts, eleven submissions, and ten by judges' decision.

On May 19, 1981, George St Pierre was born in Quebec, Canada, and after learning a Karate background from his father, GSP became a professional fighter at the age of 16. He eventually debuted during UFC 46. His victory over the then-favorite and Judo expert Karo Parisyan was a massive upset and cemented him as a rising force to be reckoned with; this was only solidified further when he won his second UFC fight in less than 2 minutes during UFC 48. St Pierre ended his career after accumulating a 26-2-0 record and having the most title defenses in the UFC Welterweight division with nine.

Anderson Silva is widely considered one of the greatest to ever step into an octagon by many, and his 34-11-0 record certainly helps his case. A former Middleweight Champion, Silva was a force in his prime, and while he held the title, he was near unbeatable. This is not an exaggeration, as Silva has the longest title streak with 16 straight wins and the second most title defenses in UFC history, at 10. He was best known for his mastery of Brazilian jiu-jitsu, where he was a 2nd-degree blackbelt and utilized this combined with his other skills to become a legend of the sport.

One of the most dramatic and entertaining personalities in the whole sport, Conor McGregor, is an Irish lightweight MMA fighter who is one of the greatest ever to fight. McGregor joined Ultimate Fighting Championship in 2013 and quickly rose in the featherweight division with his title win in 2015. The following year, he became a two-division champion by stunningly winning the lightweight title as he knocked out José Aldo in a record 13 seconds. McGregor continued his success over his career; supported by his 22-6-0 overall record, he is undeniably one of the greatest MMA fighters of his time.

José Aldo is one of the greatest bantamweights in all of UFC history. Hailing from Brazil, he learned and mastered Brazilian Jiu-jitsu, a skill he quickly used in the World Extreme Cagefighting circuit. He was the final WEC Featherweight Champion before their merger with the UFC and continued his dominance once he joined the UFC ranks. He became a two-time UFC Featherweight Champion and accumulated a 31-7-0 record during his career. To this day, many feel as though he is one of the greatest featherweights in mixed martial arts history for his exceptional record and striking ability.

Who is the greatest men’s MMA fighter of all time?

Many consider Jon Jones as the greatest men’s MMA fighter of all time for his dominance in the octagon. Jones was a fierce competitor known for his southpaw stance, reach, and accurate takedowns. His 26-1-0 record only tells part of the story, with his only loss coming in December 2009 against Matt Hamill. This was an extremely controversial loss as Jones was disqualified for an illegal downward elbow, costing him the fight. If it weren’t for this disqualification, many believe that Jones would have gone undefeated for his entire career. His impact on the sport and proven ability to win make his case for the greatest of all time.

What men’s fighter holds the most wins in UFC?

The fighter with the most wins in UFC history is Donald "Cowboy" Cerrone with 23 UFC victories. Cerrone started his illustrious UFC career back in 2011; before that, he spent his time in the WEC (World Extreme Cagefighting). As a fighter, he went a stunning 36-16-0 record in the Welterweight division during his time in the UFC and WEC. Cerrone accumulated a total of 23 wins solely in the UFC, the most ever. This record still stands to this day, and though he has since retired, "Cowboy" is still regarded as a legend within the sport.

What men’s fighter has the longest undefeated streak in the UFC?

Anderson Silva currently holds the record for the longest UFC winning streak, at 16 fights. This streak took place over six years, from June 28, 2006, to July 6, 2013, when Chris Weidman finally broke the streak. Fighters like Jon Jones and Karamru Usman have come close with 13 UFC wins each, but nobody has been able to break Silva’s record yet.