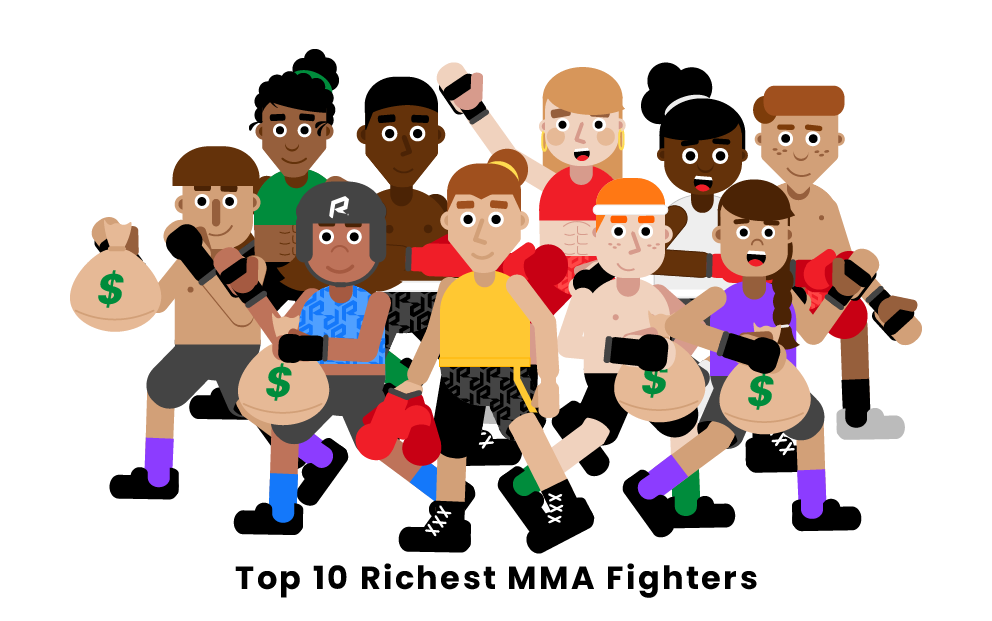 Who are the richest MMA fighters?

Conor McGregor is definitely one of the most famous fighters to ever participate in the sport of MMA. This incredible Irish fighter is known for his ability to relentlessly conquer his opponents. His MMA success mostly comes from his appearances in the Ultimate Fighting Championship (UFC), where he has prevailed in the featherweight and lightweight championship. He also had a brief time in the world of boxing where he faced the legendary Floyd Mayweather Jr. He is currently the world's richest MMA fighter of all time with a net worth of $110 million. This is expected to continue growing as long as he stays at the top of his game.

Georges St. Pierre is considered by some to be the best fighter in the history of MMA. The Canadian superstar is a professional mixed martial artist who also has won the middleweight and welterweight division championship in the UFC a total of three times. He had a highly impressive career in the ring all the way up until his retirement in 2019. Over the years, he has collected a giant sum of money through fights as well as large endorsement deals. His net worth is currently around $30 million dollars, which is far less than that of McGregor but still the second most of all time.

Brock Lesnar is a renowned sports personality that is most commonly known for his appearances in both professional wrestling and MMA fighting. He had a very successful MMA career and even won the UFC heavyweight championship in 2008. He has reached success in his wrestling career, which he is still participating in, and became the only athlete to ever win both a UFC title and WWE title. He also played professional American football in his earlier days. Lesnar's current net worth is at around $28 million dollars from his several professional sports careers and endorsements over the years.

B.J. Penn is an exceptional professional fighter in many facets. He is both an extremely successful American MMA fighter and Brazilian Jiu-Jitsu fighter. Not only is he a top MMA fighter, but he has also made history throughout his appearances in the UFC. Penn is one of only seven athletes in the history of the sport to have titles in multiple weight divisions, including lightweight and welterweight. He joined the UFC Hall of Fame in 2015. His unique career has earned him a net worth of approximately $22 million dollars making him one of the richest MMA fighters in the world.

Tito Ortiz is a talented athlete who continues to dominate in MMA fighting. Not only is he gifted in the sport, but he is also considered to be one of the key figures in helping establish MMA as a popular mainstream sport in the United States. He competed in the UFC and has been one of the fan favorites in the competitions year after year. He won the UFC light heavyweight championship in 2012. After years of success and continued endeavors in MMA fighting, Ortiz's net worth is estimated to be around $15 million dollars and growing.

Anderson Silva is a phenomenal athlete who is currently one of the best fighters in MMA. He is a Brazilian powerhouse that dominates in the UFC and holds the longest title reign in the history of the sport. Specifically, he was recognized as the UFC middleweight champion for exactly 2,457 days, and is currently ranked 15th in the middleweight division as of November 2019. From these two incredible sports careers and numerous endorsements along the way, Silva has earned a great deal of money. His net worth is approximately $18 million which makes him one of the richest MMA fighters.

Fedor Emelianenko is a very popular and respected name in MMA fighting. The Russian athlete is considered to be one of the greatest MMA fighters to ever enter the sport and is currently representing both Rizin Fighting Federation and Bellator MMA. He is well-known for his participation in MMA Pride Fighting where he won the heavyweight championship. He held this title from 2003 to 2007. Across his careers in several sports, he has found success as the submission of the year in '08, knockout of the year in '09, heavyweight of the year, fighter of the year, and even fighter of the decade for the 2000s. He currently has a net worth of $18 million dollars.

Wanderlei Silva, famously known as "The Axe" and "The Mad Dog," is a leading player in MMA fighting, having made appearances in several MMA promotion leagues. He is well-known for his participation in Japan's MMA Pride Fighting Championship where he not only made a name for himself, but also set records for the most title defense wins and knockouts. Additionally, he holds the longest winning streak in this UFC competition. The Brazilian star currently fights for Bellator MMA. His net worth is approximately $18 million as he continues to dominate in the sport.

Randy Couture is a renowned and respected athlete that was successful in MMA fighting for many years. He was a large part of the early days of MMA and his stardom attracted many fans to the sport. He made a huge impact on the fighting world and has claimed several titles over the years. He is a two-time UFC light heavyweight champion and won the UFC 13 heavyweight tournament several years ago. His talent has not gone unrecognized as he was inducted into the UFC Hall of Fame. His career has earned him a net worth of around $17 million.

Chuck Liddell is a retired MMA fighter that has dabbled in almost every popular fighting or combat sport. While is most famously known for his participation in MMA, he has also taken part in kickboxing, karate, and wrestling, amongst other sports. Liddell is regarded as one of the important figures in helping bring MMA fighting to mainstream viewers, and his impact on the sport is still recognized even years after his retirement. Liddell won 21 out of the 30 fights in his MMA career, taking home a UFC light heavyweight championship title as well. His net worth is approximately $14 million.

Who is the richest MMA fighter of all time?

The richest MMA fighter of all time is Conor McGregor. He is a famous Irish fighter who has seen MMA success mostly through the UFC. He has dominated in the featherweight and lightweight divisions for many years, securing various titles along the way. He has also given boxing a try and has fought the legendary Floyd Mayweather Jr. His fighting career, in addition to sponsorships and endorsements, makes him the richest MMA fighter worldwide with a net worth of around $110 million.

On average, how much do MMA fighters get paid?

The most popular form of MMA fighting is through the Ultimate Fighting Championship (UFC). The athletes earn money through fighting, sponsorships, and endorsements. In 2018, the average UFC fighter was paid $138,250, which was up from previous years. Through sponsorships, fighters are able to make anywhere from $2,500 to $5,000 per fight depending on how many fights they have scheduled. Endorsements also play a part but vary depending on the popularity and success of the athlete.

How do UFC fighters get paid?

In UFC fighting, participants get paid a base salary regardless of whether or not they win the fight. Every match involves drawing up a contract to determine the base salary, and high ranking fighters can demand more money. There is usually a winning bonus that is given the victor and it will typically be the same amount as the base salary. Fight Night bonuses occur during special events as well. Sponsorships also play a role in earnings, as UFC and Reebok have a new deal where fighters get a sponsorship bonus every time that they get into the ring.

The amount of money that an MMA fighter makes varies depending on their skill level, fighter rankings, popularity, and seniority, among other things. In 2018, there were a total of 187 UFC fighters that earned a six-figure salary. Yet, on the other hand, 37% of the fighters made less than $45,000 which is the median U.S. average household income. Additionally, for 2018, the median income for MMA fighters in the UFC was $68,500 and the average was $138,250. This average is very different from that of the top earners in the industry, such as Conor McGregor.