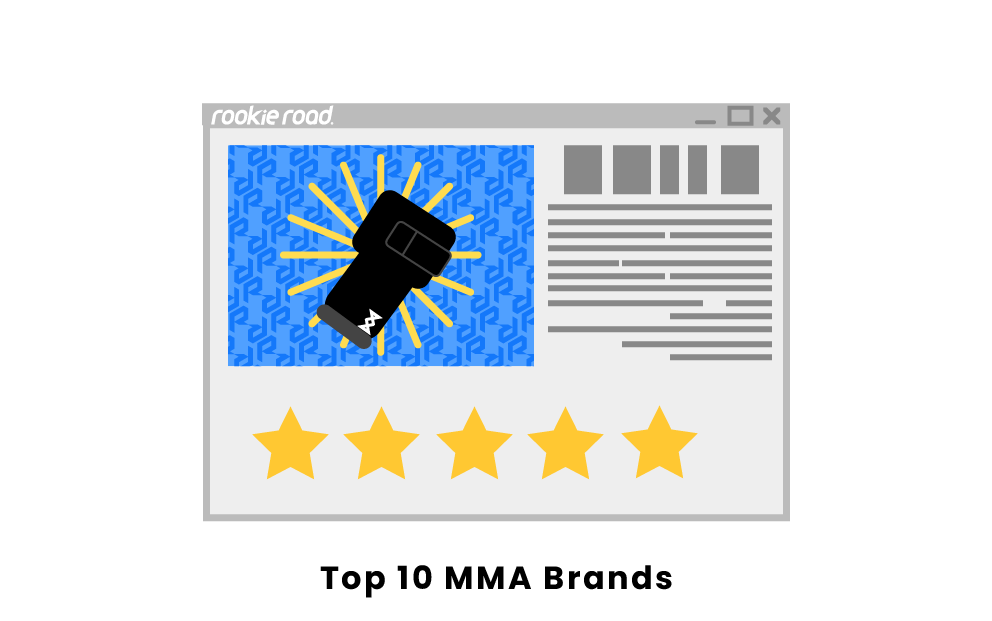 Mixed Martial Arts (MMA) is a tough and competitive sport with full body contact. It is important to acquire top-notch gear when pursuing the sport. This list compiles trusted and reputable MMA brands that are loved by amateurs and professionals alike.

What are the most popular MMA brands?

Tapout is perhaps the most recognizable MMA brand in today's popular culture. Their heavy presence in numerous combat sports makes them a clear choice for number one on this list. The company was founded in 1997 and has since become one of the largest sports clothing manufacturers in the United States. Tapout started as solely an MMA brand, but has since branched out to other combat sports and lifestyle clothing. In 2015, Tapout partnered with the WWE to enhance its reach across multiple sports. The company also sponsors popular athletes such as Jim Miller, Jon "Bones" Jones, Chad Johnson (former NFL player), and NASCAR driver Kevin Harvick. Tapout offers various product lines ranging from athleticwear, UFC or WWE apparel, and lifestyle clothing. They previously sold MMA equipment like gloves or protective gear, however, they have recently switched to focus mainly on clothing. Despite their recent changes, Tapout still offers quality products and remains one of the most influential MMA brands in the world.

Bad Boy was founded in 1982 and currently offers performance products and apparel for combat sports. Their popularity in the sporting and fashion industries, along with the wide variety of products they offer, makes them a top brand in the MMA world. Bad Boy first began selling products for surfing and skateboarding, but their rise to popularity began when they began to produce Jiu Jitsu gis and other performance gear for combat sports in the 1990's. They entered the industry by sponsoring worldwide Jiu Jitsu legend Rickson Gracie. Noticing the need for innovation in the industry, Bad Boy also began offering non-traditional clothing and apparel for martial artists and combat sport athletes. In 2010 and 2011, Bad Boy won the Best Technical Clothing Brand at the World MMA Awards, as well as Best Lifestyle Clothing Brand in 2012. Currently, they offer various performance equipment like gis, mouth guards, or gloves, along with MMA apparel, shorts, and shirts.

Venum produces a great selection of equipment and apparel for martial arts, combat sports, and fitness. The company was founded in 2006 in France. Venum stands out for the immense amount of equipment and clothing they offer. With one of the biggest selections available, they are certain to have something for everyone. They have product lines for men, women, and children across numerous sports including MMA, Muay Thai, Jiu Jitsu, and crossfit. Venum provides special gloves catered to each martial art discipline, along with different style, color, and customization options for each. The company even sells punching bags, along with nearly every piece of gear needed to begin training in a combat sport, making them very beginner friendly. Venum's sponsorships are diverse, with athletes such as Gustavo Batista (Jiu Jitsu), Angel Lee (MMA), Emilien De Falco (fitness), and Steven Da Costa (Karate).

Revgear is a popular supplier of martial arts equipment, gear, and apparel founded in 1996. MMA gear is one of Revgear's specialties, as they are one of the most used knuckle-protection gloves across all of MMA. They also offer options for additional protective gear needed to participate in MMA, Karate, Jiu Jitsu, and more. Revgear has a wide variety of protective equipment to fit the needs of professionals and amateurs alike. Their large selection and modest pricing make them one of the preferred suppliers for amateur MMA and martial arts schools in the United States. Over their 20 year history, Revgear has been a previous sponsor of the UFC and currently sponsors a long list of UFC fighters. Revgear also promotes their brand by frequently sponsoring amateur tournaments and fighters.

Founded in 1910, Everlast has been producing gear, accessories, and apparel for martial artists for over 110 years. With a great reputation in the combat sports industry, Everlast is popular amongst many professionals and amateurs in MMA. The company has won Best Technical Equipment Brand an impressive 5 times at the World MMA Awards. Everlast offers a good selection of boxing and MMA gloves for different styles, sizes, and prices. A notable aspect of Everlast is that they possess multiple patented technologies to enhance the quality, cushioning, and protective ability of its products. They also produce other equipment for martial arts such as shin guards, headgear, punching bags, mouthguards, and more. Everlast has recently launched a sponsorship campaign called #TeamEverlast that seeks to sponsor new athletes and promote the sport of MMA.

Century has grown significantly since its founding in 1976. It began as a one-person company and has since extended its reach to become a worldwide supplier of martial arts equipment. Century is credited with the invention of many popular punching bags such as the Wavemaster or Bob Bag used in mainstream MMA today. They pride themselves on offering a diverse selection of equipment to make their brand accessible for anyone from beginner to master. Century offers almost any martial arts product imaginable, from uniforms to sparring gear, even weapons. Their website also offers options for customization and same-day shipping. Headgear, belts, gloves, and punching bags are some of their top-selling products. Century is an important partner of the UFC; they are the official producer of branded fight gear, including the gear worn in the Octagon. They sponsor popular MMA teams such as the well known Team Paul Mitchell. In the past, Century has collaborated with other popular combat sports brands such as Tapout and Adidas.

Hayabusa is a very popular brand in the martial arts industry today. Their headquarters are located in Kingston, Ontario, producing boxing, fitness, and other martial arts gear worldwide. The company was founded in 2006 and has grown significantly over the past 14 years. Hayabusa is well-known in the MMA world, showing its presence through sponsorships, promotions, and collaborations. The company notably sponsors UFC champion Georges St-Pierre, and has worked closely with Glory Kickboxing in the past. Additionally, Hayabusa and Marvel teamed up last year to create the Hero Marvel Elite Series, a collection of boxing gloves branded with the Marvel name and popular characters such as Captain America, Iron Man, and Black Panther. Their collaboration with Marvel also included custom gis and apparel, which proved its success in the eyes of young martial artists. Hayabusa's top sellers are their gloves and uniforms, and they offer numerous other pieces of equipment and protective gear to fit the needs of any martial artist.

RVCA is a popular clothing brand associated with surfing, skateboarding, MMA, and Jiu Jitsu. They are based in California and were founded in 2001. While their original focus was not martial arts, the company has recently become a large figure in MMA and BJJ (Brazilian Jiu Jitsu) apparel. RVCA sponsors many prominent MMA fighters such as BJ Penn and Victor Belfort, who have both previously competed in the UFC and other MMA leagues. The company also owns an MMA and BJJ gym of their own called the RVCA Sports Training Center. RVCA offers options for both men's and women's fitness apparel, MMA shorts, accessories, jackets, and much more. Their close ties with UFC fighters paired with their stylish designs have brought their name to the front stage of MMA and made them one of the most well-known clothing brands associated with the sport.

Jaco Clothing is a lifestyle clothing brand and supplier of MMA and Jiu Jitsu gear. Their Brazilian heritage connects them with the culture of Brazilian Jiu Jitsu, MMA, and the world of martials arts. Jaco focuses on training and performance clothing such as MMA shorts, compression shorts, and BJJ gis. They also offer apparel, accessories, gym bags, and mouth guards. Jaco Clothing is a friendly brand for everyone, offering products for men, women, and children. Their partnerships with popular fighters like Wanderlei Silva and Brandon Vera give them a powerful presence in the MMA community.

Shock Doctor is considered a world leader in protective equipment for athletes across numerous sports. They produce equipment for football, basketball, hockey, and MMA. Shock Doctor's main products are mouthguards designed specifically for each sport using their patented technologies. Their reputation for providing quality protection allows them to be one of the largest suppliers of mouth guards for MMA fighters. They also offer other gear frequently used in MMA such as cups, protective pads, and shorts. Due to the company's wide selection, their gear is popular for both young athletes and professionals. Shock Doctor's mouthguards are reasonably priced, starting at $5 and ranging up to $40. While the company has sponsors in other sports such as football and baseball, they currently do not sponsor any MMA fighters. However, that does not diminish their reputation and the need for trustworthy protection in MMA.