How Does Scoring Work In MMA? 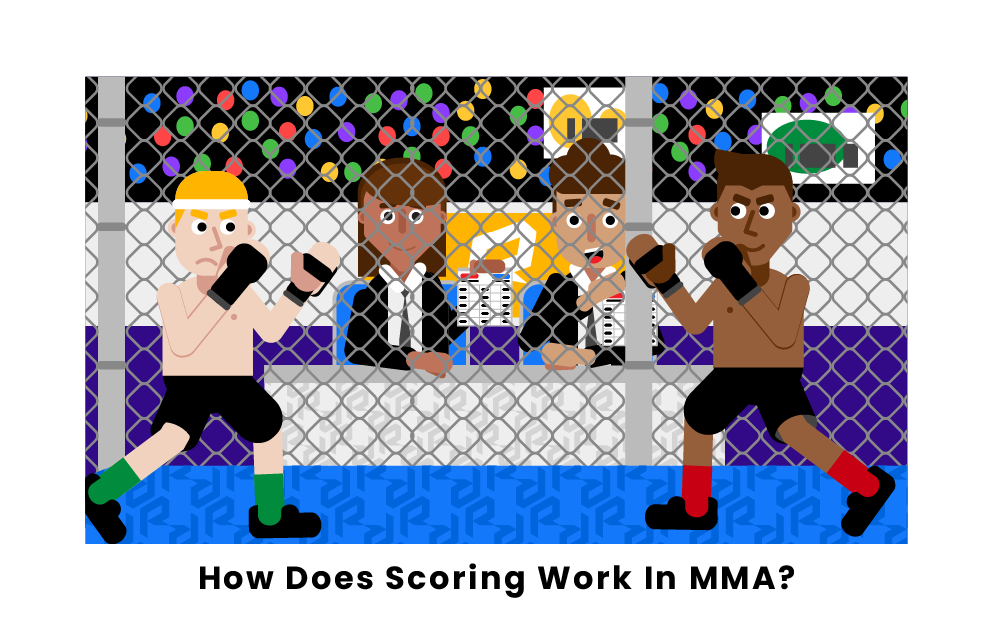 In MMA, athletes score points by striking their opponents and are given those points by judges who facilitate the fight.

In most cases, a 10-9 score is considered the most common occurrence. With a score of 10-8, you can assume they were not evenly matched and a score of 10-7 denotes that they dominated that round with very impactful and powerful strikes and attacks. A 10-7 score is very rare in professional MMA. When playing three or five rounds, the score accumulates. For a fighter who won all five rounds, their cumulative score is 50 and this is compared to the opponent, who in this case, would have much less.

Judging is difficult in MMA because much of it is left up to the judge's beliefs on the fight and not just the number of strikes and takedowns. The criteria judges use are most commonly broken down into three categories. Judges base their decisions on effective striking or grappling, aggressiveness, and fighting area/control. These criteria are also listed in order of importance. Aggressiveness will only be taken into consideration if both fighters are very close in their striking and grappling grading. Striking and grappling additionally are not cumulative. If, for example, fighter A knocks down fighter B, but fighter B is consistently hitting jabs, the score would go to fighter A because they forced a more serious blow.

Other Ways to Win

There are three main ways other than judging that can determine the outcome of a fight. A fighter can win by submission, which occurs when one fighter physically or verbally can not continue fighting. The fighter may be in a painful condition or may be in a position brought by the other fighter in which they can not continue. Another way to win in MMA is by technical knockout or TKO. This happens when one fighter knocks out another fighter. Lastly, you can win an MMA fight by a technical decision, or when a fighter is too injured to continue.

Ties can occur but are few and far between. More often than not, it is looked down upon to finish the game in a tie, but sometimes it is necessary. There are a few ways in which a game can end in a draw. A draw can occur when one judge votes for fighter A, one vote for fighter B, and the final judge declares a draw. This scenario is called a split draw.

The two other scenarios are called 'majority draw' and 'unanimous draw.' A majority draw is when two judges declare the fight a draw, thus, the majority wins. Since the majority believes it to be a draw, this outvotes the third judge, who may have voted for either fighter A or B. The last scenario is called a unanimous draw and this only happens when all three judges declare the fight to be a draw. This is extremely rare and is looked down upon by fans and the organization alike.

How many rounds do MMA athletes fight for?

The most common number of rounds that an MMA fighter will have to play is three rounds, with each round timed at five minutes apiece. This is the most common form of round count in MMA. There are special cases, however. In championship games and in the UFC, there are five rounds, lasting five minutes apiece. Championship games are often referred to as championship rounds. While not all organizations structure their fights like that, the five-round matches have been adopted by many organizations.

How can MMA fighters score points and win matches?

The judging criteria are how an MMA fighter can make their match a success. Every fighter has a list of criteria that judges look for that can help them score points and win their match. The criteria for judges is effective striking/ grappling, effective aggressiveness, and fighting area/ control. Based on these criteria, the judges award the fighters points based on their performance. Additionally, "effective aggressiveness" is only taken into account if both opponents are equal in the "effective striking/ grappling criteria.

How do MMA judges decide who wins?

Traditionally, there are three judges that sit close to the cage to judge the performance of the fighters. These judges watch the fighters and after each round, they evaluate the fighters based on criteria such as knockdowns, strikes, submission attempts, etc. Based on these evaluations, the fighter who they believe won the round will receive a score of ten, and the other fighter is evaluated based on the proposed winner.

Pages Related to How Does Scoring Work In MMA?