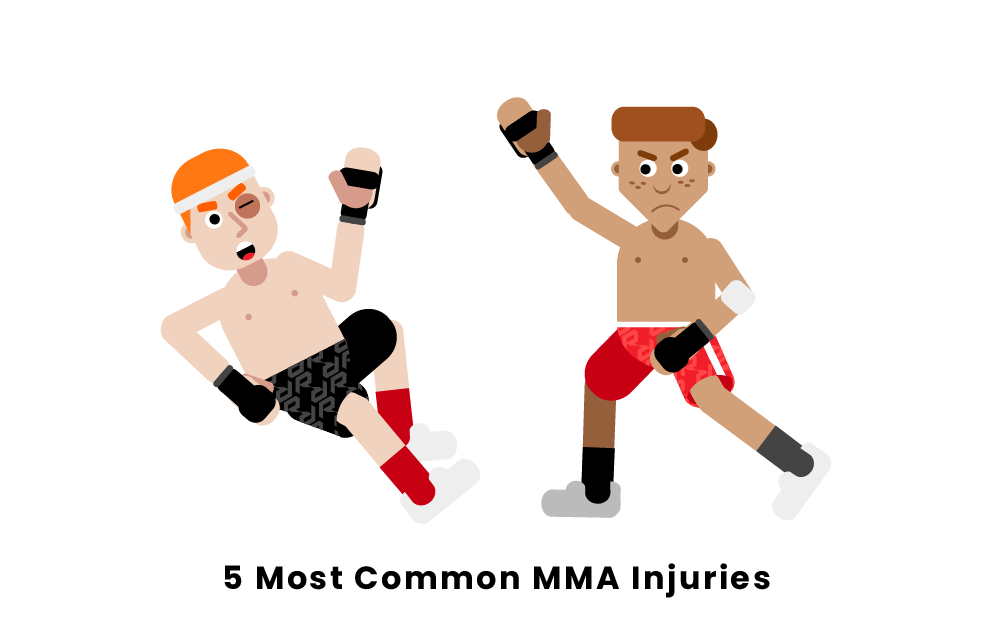 What are the most common MMA injuries?

Knee injuries are very common in MMA because of the multiple positions the knee has to be in when the athletes are fighting. There is also an immense amount of force inflicted when twisting and kicking the knee, which can affect the athlete's knee ligaments. Some of the common ligament tears include the posterior cruciate ligament (PCL) and anterior cruciate ligament (ACL). Under certain conditions and cases, these injuries may be treated with ice, compression, physical therapy, and rest. If the ligament tears are very severe, surgery and professional medical help are recommended.

Hand injuries are very regular amongst UFC and MMA fighters. Although they use gloves, there are a lot of strikes and punches with the fist involved. They can suffer from jammed fingers, ligament tears, and broken fingers. Usually, jammed fingers and ligament tears can heal by themselves without any professional help or surgery. But some hand injuries may require medical attention to help reattach ligaments or realign bones. Although hand injuries may be hard to prevent, if fighters take proper care and practice in proper form, they can be avoided. Another viable option is to replace their gloves if the cushioning thins out.

Due to the lack of protective headgear, concussions are very common in MMA. Athletes are also allowed to hit the neck and the head area which puts their opponent at greater risk. It is imperative that athletes and referees can recognize signs of concussions because if an athlete is continuously hit after sustaining a concussion, it could lead them to have permanent brain damage. If an athlete gets a concussion, they should get proper rest and heal completely before fighting again. Although stricter regulations have helped reduce head injuries and concussions, the best way to avoid this is to be on the lookout for the first sign of head injuries to help prevent it from becoming more serious.

Arm injuries can be seen quite often during MMA fighting. The armbar is a deciding finishing move in jiu-jitsu and is used regularly during fights. The armbar puts an immense amount of pressure on the arm joints especially when it is stretched out. This can cause the bones to hyperextend which leads them to break often. Professional medical help is recommended as they can check the arm for any breaks and fractures and can recommend the necessary surgery or recovery tips.

Fracture and broken bones are very typical in UFC and MMA fighting. The athletes wear minimal protective equipment, making them more susceptible to injuries. During fights, their bones can endure quite a lot of stress which can lead to the bones breaking. Some common areas of broken bones include arms, elbows, hands, and shinbone (tibia). Some facial fractures are also common, including the orbital bone and nose. The treatment for broken bones varies on the type of damage to the bone. Some fractures in the legs and arms can be placed in a cast to heal and be repositioned. But more severe fractures can require surgery to put in pins, screws, or rods.