What Is The Lowest Seed To Make The Final Four in March Madness? 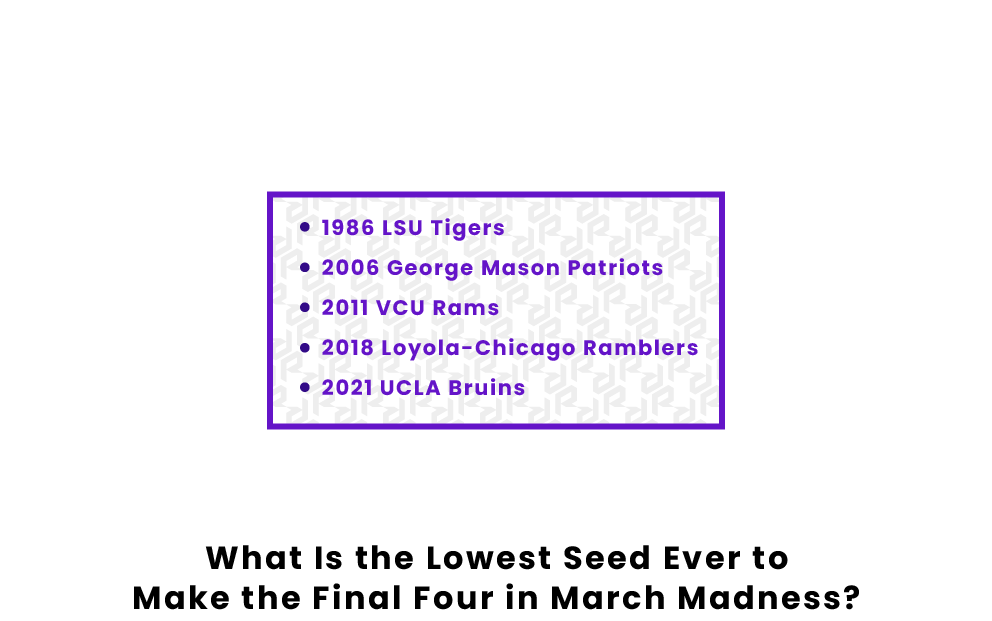 The lowest seed to ever make the Final Four is an 11-seed, which has happened five times in history. Each of these teams fought to become the epitome of a Cinderella story, taking on teams widely considered superior and coming out on top repeatedly. Read on to learn about each team and the obstacles they faced to accomplish this feat.

Number 11 seed LSU made a run to the Final Four in 1986 off the back of a strong offense. During the run, LSU defeated the highest possible seeded team they could have faced in each round they played. The biggest upset came in a 59-57 win over number one-seeded Kentucky in the Southeast Regional Final in Atlanta. Unfortunately for the Tigers, their tournament run ended in the Final Four with a 88-77 loss to Louisville. LSU remained the lowest-seeded Final Four team ever for two decades until George Mason made their run to tie the record in 2006.

In 2006, George Mason tied LSU's lowest seed record when they topped the University of Connecticut 86-84. Number 11 seed George Mason’s upset of number one-seed UConn was massive, to say the least. Connecticut had won the national championship two years prior and had future NBA player Rudy Gay on the court for them. Unlike LSU, George Mason rode to the Final Four on the back of a great defense. However, like LSU, they fell in the national semi-final, with eventual back-to-back champions Florida outclassing the Cinderella story 73-58. George Mason managed this tournament run without a single future NBA player on their roster, making their accomplishments all the more impressive.

The 2011 VCU Rams were the first 11 seed to make a Final Four run during the new 68-team format of the NCAA Men’s Basketball tournament. This new format required the Rams to win five games instead of four to make the run. VCU’s biggest upset came in a 71-61 win over the number one seed in their region: Kansas. VCU overcame a Kansas team that had future NBA players Marcus Morris, Markieff Morris, and Thomas Robinson on their roster. In the semi-final, they ultimately fell 70-62 to Butler, suffering the same fate as other 11-seed Cinderella stories.

Loyola-Chicago’s run to the Final Four revealed a period of great parity in March Madness. The run made them the third 11 seed in 13 years to make the Final Four. The team won clutch game after clutch game, ending with a 78-62 win over Kansas State to send the Cinderella story to the Final Four. The Ramblers would go on to lose in the National semi-final to Michigan by a 69-57 score. This run enabled Loyola-Chicago to make the NCAA tournament in two of the next four full seasons and brought immeasurable fanfare to the program during their runs for the title.

Unlike many of the Cinderella teams on this list, UCLA is a blue blood basketball program. However, at the time of this Final Four, UCLA hadn’t made it this far in March Madness in 14 years. UCLA became the fourth 11 seed to make the Final Four in 16 years with its 51-49 victory over number one seeded Michigan. This victory made UCLA the third 11 seed Final Four team to make the run with five wins. However, UCLA fell at the buzzer in the semi-final to number one-seeded Gonzaga.

How many 11-seeds have made it to the Final Four?

Has a 16-seed ever made it to the Final Four?

What are the odds of an 11-seed reaching the Final Four?

Based on statistical analysis, there is only a 3.5% chance that an 11-seed team in March Madness will advance to the Final Four. Statistically, 11-seeds are the lowest-seeded teams likely to make the Final Four at all, as every seed below 11 has an assumed likelihood of 0.0% of reaching the Final Four, as this has never happened before. However, this does not mean it is impossible for a lower seed to reach the Final Four.

Pages Related to What Is The Lowest Seed To Make The Final Four in March Madness?