What Is An Automatic Bid In March Madness? 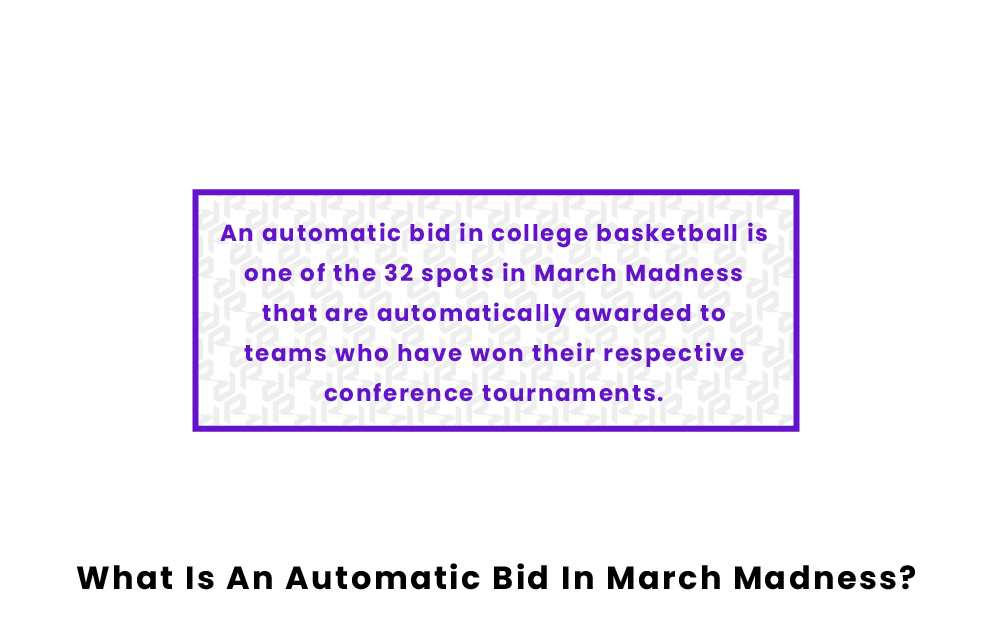 Every spring, NCAA college basketball kicks off its annual tournament, March Madness, where 68 of the best-performing teams in the country face off in an elimination-style bracket to determine the NCAA National Champion. As part of the selection process, about half of the teams in the March Madness bracket receive “automatic bids” that ensure their entrance into the tournament. What are these automatic bids? Below, we will explain how they work, and how a team can receive an automatic bid for March Madness.

What Is an Automatic Bid in March Madness?

Every year, there are unlikely teams who end up winning their conference tournament and acquiring an automatic bid. One example is the 2011 UConn Huskies. They went into the Big East Tournament as the 9 seed, and ended up winning five games to become the Big East champions. And their improbable run continued into March Madness, where they beat opponent after opponent to end up winning the National Championship over the Butler Bulldogs.

The 2017 Michigan Wolverines were an 8 seed heading into the Big Ten Tournament, and the biggest obstacle they had to get past wasn’t on the basketball court. The plane ride for the Wolverines to Washington DC was a complete disaster, with the plane sliding off the runway. The team was shaken up and arrived just a couple hours before tip-off. They also were forced to play their first game in their practice jerseys due these travel difficulties. Even through all of that, the Wolverines took care of their first game against Illinois and ended up winning the Big Ten Tournament.

How many teams get an automatic bid in March Madness?

How does a team earn an automatic bid in March Madness?

Pages Related to What Is An Automatic Bid In March Madness?