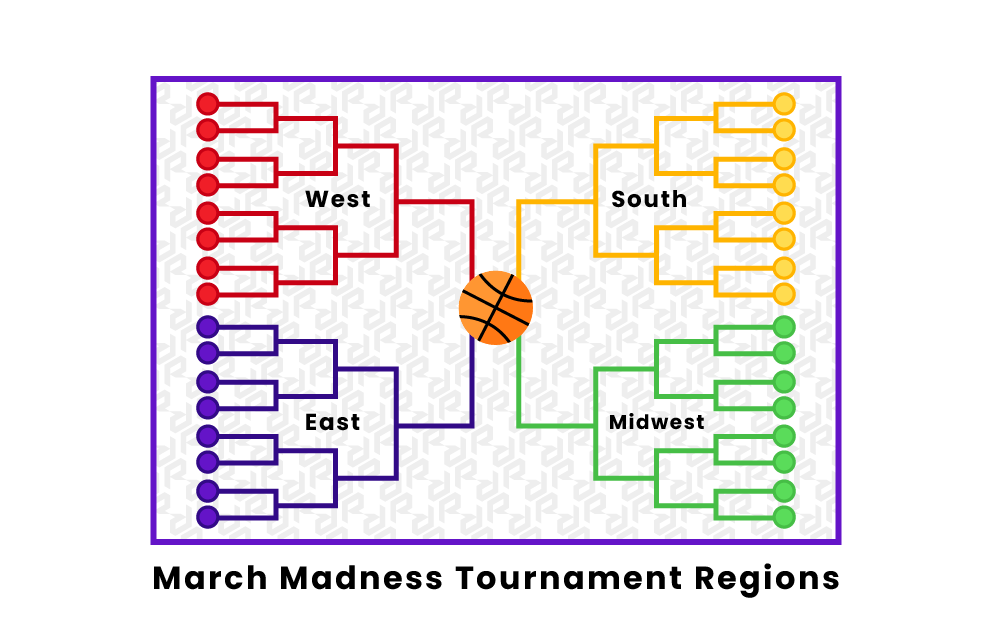 At the end of each year in college basketball, there is a postseason tournament known as March Madness. There are 64 teams that compete in the tournament and it is broken up into four regions. Each region consists of teams from that geographical area with higher seeds getting priority to playing close to their home stadium. Read on for a breakdown of each region, as well as the most notable Cinderella run each region has seen since 1999.

The March Madness Tournament consists of games played in four distinct regions each year. These regions have had different names over the years, and are subject to change based upon the decisions of the NCAA Tournament Selection Committee. However, the most common designations for the four regions (including for the 2023 tournament) are:

How Are the March Madness Regions Determined?

Once the 68 qualifying teams are set, the Selection Committee determines the seeding of each team, and also makes the decisions regarding which teams will play in which region. Seeding is done by creating an S-curve that seeds all 68 teams in order, from 1 to 68, and then subdivides them into groups of four, with the top four teams being the four No. 1 seeds, Teams 5-8 being the No. 2 seeds, and so on through the No. 16 seeds.

Once these seedings are established, one team of each ranking is placed in one of the four regions. Generally, higher-ranked teams earn the privilege of being placed in regions closer to their state or city of origin. If the first four teams selected from one conference are all seeded on the first four lines, they must be placed in different regions.

The March Madness East Region is one of four regions teams are split into for the tournament. All of the games within this section of the beginning of the tournament are played within the eastern portion of the country, and the regional play concludes with one of the four different Elite Eight (regional title) games, which decide who wins the region and reaches the Final Four.

Perhaps the most improbable of all the Cinderella runs we’ll mention, UConn’s 2014 run in “The Big Dance” was something to behold. Originally set as a No. 7 seed, UConn stunned team after team throughout the tournament and ultimately won the National Championship against Kentucky. During this run, UConn defeated St. Joseph’s (10), Villanova (2), Iowa St. (3), Michigan St. (4) and Florida (1), before ultimately defeating No. 8 seed Kentucky by a score of 60-54 to seal one of the most unlikely National Championships in recent memory. UConn was the first No. 7 seed to ever claim the National Title.

The March Madness Midwest Region is one of four regions teams are sorted into at the start of the tournament. All of the games played within this section of the beginning of the tournament are played within the midwest, and the regional play concludes with one of the four Elite Eight games. The Elite Eight game decides the winner of the Midwest Region.

Sometimes, the most memorable Cinderella runs come from one star leading their team to multiple victories. This was no different in 2008, as current NBA star Stephen Curry helped lead his team, Davidson, to an improbable run. Tenth-seeded Davidson defeated Gonzaga (7), Georgetown (2), and Wisconsin (3) to make the Elite Eight. They faced first-seeded Kansas, and lost a heartbreaker by just two points. Nobody expected this sort of run by Davidson out of the Midwest Region, and Curry’s play brought more attention to him and the school than ever before.

The South Region boasted one of the most prominent Cinderella stories in recent years, when No. 11 seed Loyola Chicago went on a completely unprecedented run in 2018. During this streak, Loyola defeated the No. 6 seed (Miami), the No. 3 seed (Tennessee), the No. 7 seed (Nevada), and the No. 9 seed (Kansas State) consecutively. Unfortunately, their luck ran out once they left the South Region, as they fell to No. 3 seed Michigan by a score of 69-57.

The West Region is the largest of the four regions geographically, and has teams from the west of Kansas (the middle of the country) to the Pacific Coast. That means the west region is essentially responsible for covering nearly half of the country. Every year, there are different locations that games are played in. The winner of the West Region moves on to the Final Four.

The most memorable Cinderella moment in the West Region came back in 1999. The tenth-seeded Gonzaga Bulldogs went on an amazing run to make their regional finals in the Elite Eight. Gonzaga started this run by defeating Minnesota (7), Stanford (2), and Florida (3). Unfortunately their streak ended against first-seeded UConn in the Elite Eight, as they came up short in a five-point loss. This remains a well-known Cinderella story today, and will be remembered throughout March Madness history.

Changes Due To COVID-19

The 2021 March Madness Tournament was different from prior years. Due to the COVID-19 pandemic, all games were held at six different locations in Indiana: Lucas Oil Stadium, Bankers Life Fieldhouse, Hinkle Fieldhouse, Indiana Farmers Coliseum, Mackey Arena, and Simon Skjodt Assembly Hall. Teams used the Indiana Convention Center as a practice facility. Keeping the entire tournament in one state allowed for minimal travel and stronger safety protocols, both extremely important during the unprecedented restrictions of the pandemic.

Are the regions always the same in March Madness?

Since 2012, the four regions used in the NCAA Tournament are East, Midwest, South, and West. Prior to this, there were instances of different regions. The Southwest and Southeast are examples of past regions that are no longer used. The Southeast Region did have one of the most memorable Cinderella runs in tournament history in 2011, when 8-seed Butler made it all the way to the National Championship.

How is it decided which teams belong in each region?

Typically, the dispersal of the regions is geographically-based. In short, programs are sorted into the region in which they are closest to the playing venues that given year. That being said, top-seeded teams also have priority in this process. Therefore, lower-ranked teams are sometimes forced to play in a region that is not the closest to their home court, geographically-speaking.

How are the regions selected for the 2021 NCAA Tournament?

For the 2021 National Championship, teams were sorted into regions via an S-curve. This is similar to a “Snake Draft”. The committee lines the teams up in order of seeding from 1-68. Then, they “snake” through the list in order to sort each program. This would mean that the strongest No. 1 seed would get the weakest No. 2 seed, and the weakest No. 1 seed would get the strongest No. 2 seed. From here, each side of the No. 1 seeds take turns getting either the strongest or weakest opponent in each seeding and the No. 1 seeds in the middle would follow suit in a draft like format.

What is a “Cinderella Story” in March Madness?

In sports as a whole, March Madness included, a Cinderella Story is when a team that nobody expected much from pulls off the unthinkable and plays very well in a tournament or competition. Cinderella stories in March Madness tend to garner an insane amount of media attention as the team in question works their way deeper into the tournament, with Sister Jean of Loyola Chicago being the latest individual associated with a Cinderella team to obtain viral fame overnight. The name of the concept is derived from the well-known fairy tale “Cinderella,” which depicts the poor Cinderella going from rags to riches, reflecting how Cinderella Story teams start out as underdogs, but experience almost magical success.