Top 9 Men's Basketball Coaches With The Most March Madness Wins 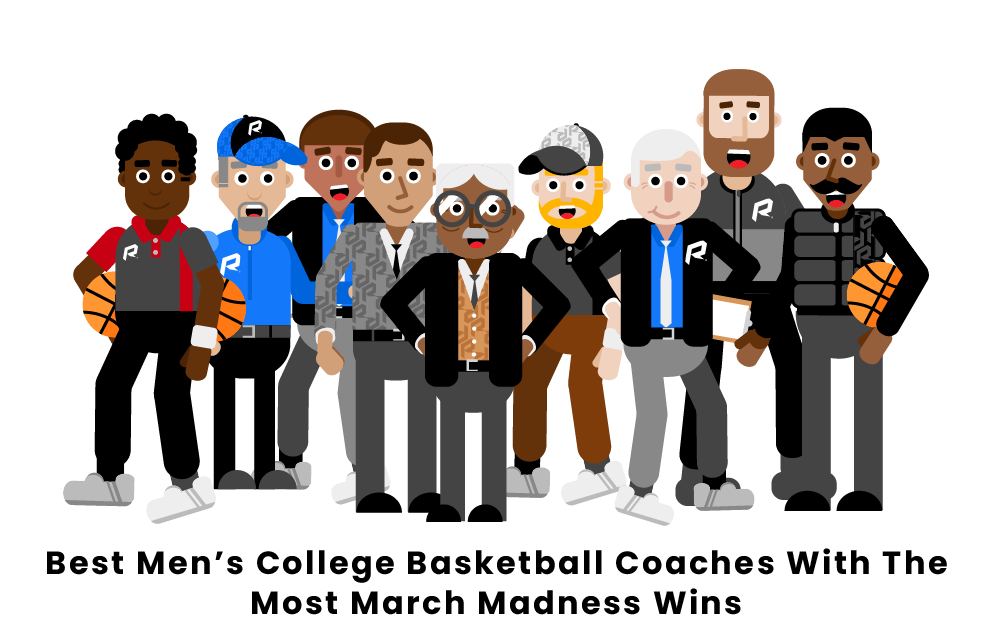 March Madness represents the annual display of the highest level of competition in men's college basketball. Making it to the tournament and advancing is a dream for some schools, but not for the nine winningest coaches in men's March Madness history. These nine legendary coaches have made winning a habit and redefined the men's college basketball tournament standards.

Who are the coaches with the most March Madness Wins?

With 97 NCAA tournament game wins, twelve trips to the Final Four, and five NCAA Division I National Championships as of 2021, Mike Krzyzewski is widely recognized as the greatest coach in men's college basketball history. After four years as a player with the Army Black Knights, "Coach K" started his coaching career at Indiana before moving back to West Point. His success at Army earned him the job at Duke, where he has been since 1980. In 41 seasons at Duke, Coach K has developed talents such as Kyrie Irving, Grant Hill, Christian Laettner, and Zion Williamson. In his final season and only three wins away from 100 March Madness wins, Coach K is still chasing new records.

If the all-time winningest coach in men's March Madness history is from Duke, it is only fitting that the second one on the podium is from their archrival, the University of North Carolina. With 77 wins in March Madness games, Coach Roy Williams retired in 2021 after over 30 seasons as a Division I head coach. The former UNC player has made it to the Final Four twice as head coach of the University of Kansas and seven times after he took over at his alma mater, winning the National Championship three times. At UNC, Roy Williams coached college basketball stars such as Tyler Hansbrough, Ty Lawson, Wayne Ellington, and three-time NBA Champion Danny Green.

Two-time NCAA Tournament Champion Dean Smith closes out the podium of the winningest coaches in March Madness history with his 65 wins as a head coach of the University of North Carolina. Remembered by most for having developed Michael Jordan, Dean Smith impacted several generations of players during his 36-year tenure at UNC. Among them are NBA legends such as Vince Carter, James Worthy, Jerry Stackhouse, and Antwan Jamison. Dean Smith is also one of the few people to have won an NCAA National Championship both as a player and a coach, as he won the title in 1952 playing for Kansas University.

Jim Boeheim, Syracuse University basketball alumni and long-tenured coach of the Orange, is widely recognized as a local legend in Upstate New York. After graduating in 1966, Boeheim went on to play professional basketball for a few years before coming to the university as an assistant coach in 1969. After seven years as a coaching staff member, Boeheim was promoted to head coach in 1976. In his forty-second season as the head coach of Syracuse, Jim Boeheim has won 57 March Madness games, and has made it to the Final Four five times, winning the National Championship in 2003. NBA greats like Carmelo Anthony and Dwayne "Pearl" Washington dominated the scene in college basketball while under Boeheim.

Coach Tom Izzo is a local hero in East Lansing, Michigan. After a brief stint as an assistant coach at his alma mater Northern Michigan, Izzo joined the Michigan State University coaching staff in 1983. After twelve seasons as an assistant coach, Izzo was nominated to become head coach of the Spartans, following the retirement of the great Jud Heathcote. In 2000, after only five seasons in charge, Izzo led MSU to a National Championship. In total, Tom Izzo has secured 52 NCAA Tournament game wins and been to seven Final Four trips. He has developed NBA stars such as Draymond Green and Miles Bridges.

With 51 wins in March Madness, Jim Calhoun is the sixth winningest coach in men's college basketball history. The Massachusetts-born has worked all of his life in New England, where he obtained his greatest success with the University of Connecticut. In 26 seasons as the head coach of the Huskies, Calhoun recorded 49 wins in March Madness games and almost accomplished a perfect Final Four record, as he won the National Championship three times in four attempts. During his time at the University of Connecticut, Calhoun developed NBA stars such as Richard "Rip" Hamilton, Ray Allen, Kemba Walker, and Andre Drummond.

The late John Wooden is widely considered one of the greatest basketball coaches of all time. He claimed ten National Championships in twelve trips to the Final Four. The Indiana native played at Purdue University for three seasons before coaching a few high school teams. In 1946, Wooden was named head coach at Indiana State, where he stayed for two years before moving to UCLA. In 27 seasons at the helm of the Bruins men's basketball team, Wooden racked up over 600 career wins and developed all-time basketball greats like Kareem Abdul-Jabbar, Reggie Miller, and Bill Walton. He is tied with Bill Self with 47 wins in NCAA Tournament games.

Joining the University of Kansas in only 2003, Bill Self has quickly accomplished turning the Jayhawks into one of the best men's college basketball programs year in and year out. In his 18 seasons in Lawrence, Kansas' Bill Self has won eight Big 12 Tournaments and one National Championship in three Final Four trips. He is tied with John Wooden for total tournament game wins at 47. Bill Self has also created a talent factory at the University of Kansas. Many current NBA players have been drafted out of KU, including the Morris twins, Markieff and Marcus, Devonte' Graham, and Joel Embiid.

Out of the top nine winningest coaches in the history of men's college basketball, John Calipari is the only one that has had stints in the NBA. Despite some good seasons for the 76ers and the Nets, Calipari built his legendary status in college basketball. First coaching at UMass and then Memphis, Calipari now coaches the Kentucky Wildcats after coming back from the NBA. Calipari has made it to the Final Four six times, winning it once in 2012 with the University of Kentucky. With these teams, he has won a total of 46 NCAA Tournament games in his coaching career. Calipari has developed many NBA superstars in his college coaching career, including Karl-Anthony Towns, Anthony Davis, Devin Booker, and former MVP Derrick Rose.

Who is the greatest men's college basketball coach of all time?

For many decades, John Wooden was unanimously considered the greatest men's college basketball coach of all time. Having won ten titles and developing the NBA all-time leader in points scored, Kareem Abdul-Jabbar, Wooden's legacy will be eternal. However, throughout his time at Duke, coach Mike Krzyzewski has beaten almost every single record, becoming a habitual Final Four participant and assembling some of the most entertaining teams of all time.

What men's college basketball coach has the most Final Four appearances?

What men's college basketball coach has the most March Madness tournament titles?