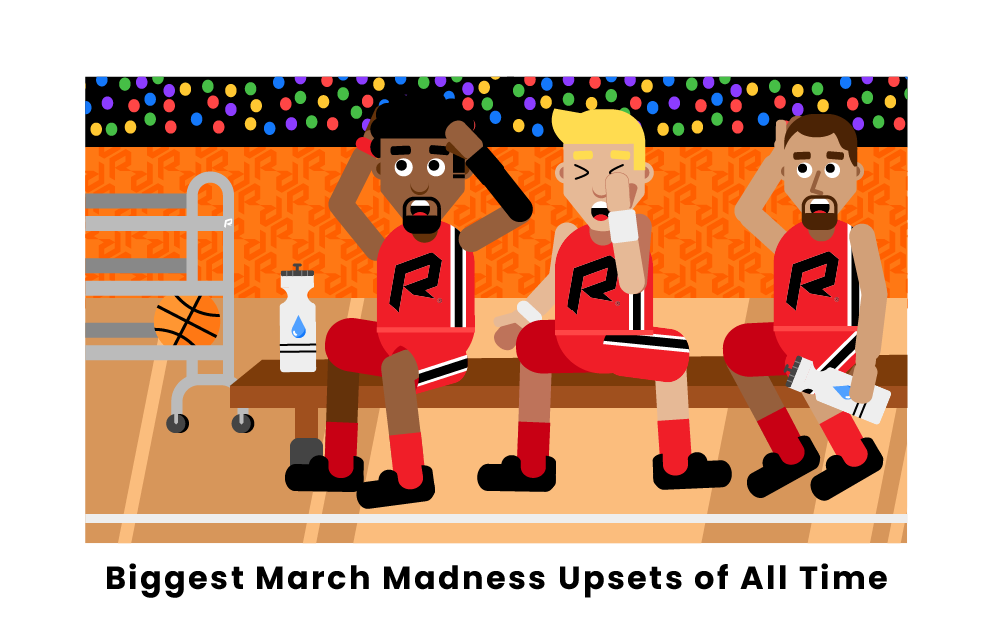 March Madness is one of the most significant parts of college basketball; 64 teams, single-elimination, and the chance to be remembered forever make this one of the most popular tournaments in all college sports. Yet with the format, upsets happen all the time, and this list highlights some of those iconic games.

What Are the Biggest March Madness Upsets of All Time?

The most recent game on this list, occurring in 2018 and possibly the most memorable one, featured UMBC’s victory over Virginia. This win was historical, as going into the match, Virginia finished the season 30-2, was the #1 ranked seed in its bracket region, and a favorite to win the whole tournament. Conversely, UMBC was 24-10 in the regular season and a #16 seed going into the matchup. Virginia was a heavy favorite to win as a #16 seed had never beaten a #1 seed in the first round of the tournament, and the talent gap was seen as too large for UMBC to overcome. Yet when the game ended, UMBC claimed victory in a blowout fashion, beating Virginia 74-54 and cementing itself in the history books.

The Georgetown Hoyas, the #2 seed in the South Region for the 2013 tournament, came against #15 seeded Florida Gulf Coast University. This was a stunning upset as it was only the seventh time in March Madness history that a #15 seed defeated a #2 seed. The game was close throughout, and the Hoyas almost staved off defeat. However, in the game’s waning moments, a massive one-handed alley-oop dunk by Florida Gulf Coast forward Chase Fieler sealed the win for FGCU in this dramatic upset.

One of the biggest upsets in the tournament final round was when the famous 1983 "Phi Slama Jama" Houston basketball team was handed a stunning loss by the hands of the NC State Wolfpack. The Houston team was a #1 seed, a heavy favorite, and loaded with talent featuring future NBA Hall of Famers such as Clyde Drexler and Hakeem Olajuwon. In comparison, the NC State team was a #6 seed, massively exceeding expectations for their tournament aspirations. The game was incredibly close and tied at 52 in the final seconds before Lorenzo Charles' dunk with one second left sealed Houston's fate.

This iconic game from the final game of the 1985 tournament is fondly remembered by the nickname "The Perfect Game." It featured the future champion Villanova Wildcats, who shot an astonishing 9-10 from the field in the second half and stunned the eight-point-favorite Georgetown Hoyas by a narrow two-point victory. The two teams previously played each other twice, with Georgetown winning both times in Big East Conference play. Villanova entered the tournament as a #1 seed, while the Wildcats' relatively underachieving season left them with a #8 seed ranking before their historic championship run.

One of the worst losses in the Syracuse Orange fanbase and program is one of the most incredible wins and upsets for the Richmond Spiders. This 1991 first-round game saw the #2 seed Orange lose to the #15 seed Richmond Spiders, despite having the future third overall pick in the NBA draft in Billy Owens, who was having a great season in his own right. After handing Syracuse a stunning loss, they became the first #15 seed to win in the first round and defeat a #2 seed; with many people stunned at the victory, the final score was 73-69.

This 75-70 upset of the Duke Blue Devils by Lehigh in the second round of the 2012 NCAA Tournament was shocking to the rest of the field and those watching at home. This was only the second time in NCAA history that a #15 seed defeated a #2 seed in the tournament. This massive upset was spearheaded by an incredible 30-point performance from future NBA star CJ McCullum, who handed a loss to a loaded Duke roster filled with future NBA players such as Seth Curry, Austin Rivers, and brothers Mason and Miles Plumlee. This staggering gap in talent between the two teams and the circumstances earn this game a rightful place as one of the greatest upsets in NCAA Tournament history.

During the 1986 NCAA Tournament, the Cleveland State Vikings became the first #14 seed to ever reach the Sweet 16, and their journey there began with an upset against the University of Indiana. Going into the first-round game, Indiana was heavily favored to win as the third seed, while Cleveland State was 11 spots below them in ranking. Empowered by powerhouse Clinton Ransey as well as Eric Mudd and Clinton Smith, the Vikings took victory over the Hoosiers in an 83-79 victory.

One of UCLA’s most embarrassing defeats occurred when Princeton upset them in the first round of the 1996 NCAA Tournament. The Bruins were defending champions and boasted star players J.R. Henderson, Toby Bailey, and Charles O’Bannon. UCLA entered the tournament as a #4 seed, while Princeton was seeded 13th. Thanks to their incredible defensive efforts and Pete Carril’s coaching, the Tigers smothered UCLA and came out on top 43-41.

What is the biggest upset in March Madness history?

In the long-standing history of the March Madness Tournament, the most remarkable upset ranking-wise was by the 2018 UMBC team. Their victory over the #1 seed, Virginia, was the first and only time in NCAA Tournament history that a #16 seed had ever won against the #1 seed. The biggest comeback in tournament history was completed by Duke when they overcame a 22-point deficit to Maryland in the 2001 tournament.

Has a 16 seed ever beaten a 1 seed in March Madness?

A #16 seed defeating a #1 seed has only happened once in March Madness history, with the UMBC Golden Retrievers beating the Virginia Cavaliers during the 2018 tournament. Though Virginia was heavily favored to win as No. 1 seed, UMBC ended up handily winning the first round game by 20 points (74-54).

What is the average number of upsets that happen in March Madness each year?

Since the tournament was expanded to 64 teams in 1985, there has been an average of 12 to 13 upsets per year. Traditionally, most upsets have occurred during the first round of March Madness. The 2007 tournament had the fewest upsets in total, with only four teams claiming a win over a higher-ranked opponent. On the other hand, the 2014 and 2019 tournaments both hold the record for most upsets, featuring 19 total upsets each.