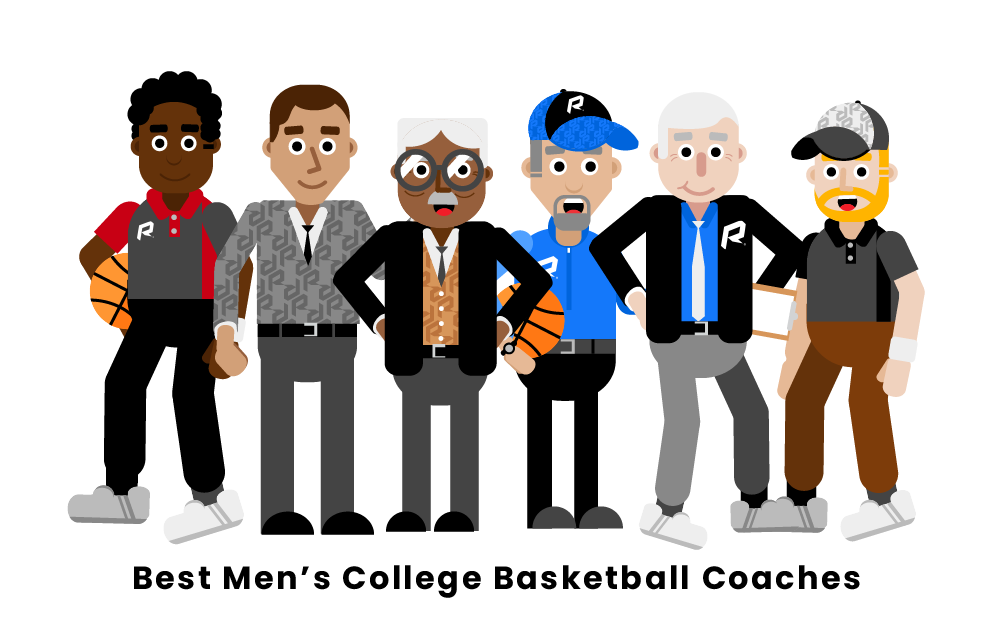 Men’s college basketball coaches are some of the most respected in all of sports, partly because their job is so difficult. They must guide their teams to victory over a season while educating, inspiring, and mentoring their student-athletes, helping them grow into better adults. Here is a list of some of the most legendary men’s college basketball coaches in the game.

Who Are the Best Men’s College Basketball Coaches of All Time?

One of the most respected and admired coaches in all of sports, John Wooden, the “Wizard of Westwood,” was known for his dominant championship run at UCLA and his unique way of mentoring players through inspirational quotes. Wooden led the Bruins to an astonishing ten NCAA Championships in a 12-year period, controlling the tournament in the late 1960s and early 70s.

A well-regarded player in his own right, Wooden took his high school team to a state championship, was named three-time All-American at Purdue, and played several years professionally in the NBL before moving on to coaching. In his honor, the college basketball player of the year award is called the John R. Wooden Award.

Universally beloved and synonymous with Duke basketball and the Dream Team, Mike Krzyzewski is known around the globe as “Coach K.” Krzyzewski started as head coach of the Duke Blue Devils in 1980. During his time as head coach, Duke has won 12 ACC season titles, 15 ACC Tournament championships, and five NCAA championships.

As coach of the USA men’s national team, Krzyzewski won three Olympic golds, one of which came in 1992 with the Dream Team. Coach K played college basketball at Army under Bob Knight, then coached there for five years to kick off his career before heading to Duke. Krzyzewski is the winningest coach in men’s college basketball history by a long shot, with 1,202 victories to his name when he retired at the end of the 2021-22 season.

Bob Knight is one of the most successful coaches in college basketball history, with 902 victories to his name. Also called “the General,” Knight is best known for his time coaching Indiana, during which the Hoosiers won three NCAA championships and 11 Big Ten Conference championships.

He also coached the 1984 USA men’s Olympic team to a gold medal. After playing football and basketball in high school, Knight played basketball at Ohio State, where he was a reserve on their 1960 championship team. He went on to coach at Army, becoming the youngest head coach in NCAA history. After Knight’s stint at Indiana, he finished his career as head coach at Texas Tech.

Roy Williams is one of the most prolific college coaches in history. During his 33-year head coaching career, he led Kansas and North Carolina to a combined 903 wins. Williams played high school basketball under coach Buddy Baldwin, then college basketball as a freshman for Dean Smith at UNC. He transitioned to a student coaching assistant, then returned to UNC as an assistant coach, where he helped the team reach an NCAA championship.

Williams took over the ailing Kansas Jayhawks as head coach in 1988 and turned the program around to become the most winning team of the 1990s, despite not winning a championship. He then went to North Carolina, where he led the Tar Heels to three NCAA championships.

Smith played college basketball for Kansas under Phog Allen, notably winning an NCAA championship in 1952. After his own playing career, he was an assistant coach at Kansas and Air Force before assuming head coaching duties at North Carolina in 1961. In addition to his winning percentage, Smith was known for the high graduation rate of his players and the integrity of his program.

As the face of Syracuse basketball, Jim Boeheim is one of the most successful college coaches of all time. A Syracuse man through and through, Boeheim played guard for the Orangemen in college, then took an assistant coaching job at the school before taking the head coach position in 1976.

During Boeheim’s long tenure at Syracuse, the Orange have won nearly 1,000 games, including five Big East Tournament championships. They made it to three NCAA Tournament championship games, finally winning one in 2003 with the help of forward Carmelo Anthony. Boeheim also served as an assistant coach for the USA men’s national team for several World Championships and Olympic Games.

Herb Magee, also known as “The Shot Doctor,” is a former NCAA Division II basketball coach for Thomas Jefferson University (formerly Philadelphia University). Though he was initially drafted to the Boston Celtics, a finger injury stopped Magee’s NBA career and forced him to take up his first assistant coach position.

During a record-breaking 54 seasons, Magee led the men’s basketball team at Thomas Jefferson University to six CACC regular season championships, five CACC tournament championships, and even an NCAA Division II Championship in 1970. In 2011, he was inducted into the Naismith Basketball Hall of Fame for being arguably the best and definitely the longest head coach to ever grace NCAA Division II men’s basketball. In 2022, Magee retired after an incredibly long and rich coaching career.

After coaching high school wrestling and basketball, Rupp was tapped to be the University of Kentucky’s head basketball coach in 1930. Earning the nickname "Baron of the Bluegrass," Rupp became one of the most successful college coaches of all time. His Jayhawks teams won the NCAA Championship four times and the SEC Tournament 13 times. When he retired in 1972, Rupp had won 876 games and lost 190, giving him a winning percentage of .822, the second-highest of all time.

Which college basketball coach has the most wins?

The college basketball coach who has the most wins is Mike Krzyzewski. He has 1,202 wins to his name between his stints at Army and Duke. Krzyzewski retired at the end of the 2021-22 season. In second place is Jim Boheim, with over 1,000 wins and no official plans to retire. The only other active coach in the top ten winningest coaches is Cliff Ellis, who recently surpassed 900 victories.

Which college basketball coach has won the most NCAA Championships?

John Wooden is the college basketball coach who has won the most NCAA championships. He has ten national titles to his name, all at the helm of the UCLA Bruins. His 10 NCAA championship wins occurred within a 12-year period in the late 1960s and early 70s, with seven of them in consecutive years. Mike Krzyzewski is in second place with five championships, and Adolph Rupp is in third with four titles. Roy Williams, Jim Calhoun, and Bob Knight have each won three championships.

Which college basketball coach has coached for the most seasons?

Herb Magee is the college basketball coach who coached for the most seasons, with 54 total years on the job. Known as “the shot doctor,” he was the head coach of Division II school Thomas Jefferson University, a post he occupied from 1967 to 2022. Cliff Ellis, who has been a head coach since 1975 and currently helms Coastal Carolina, is the coach with the longest career in exclusively Division I programs, with 49 total seasons under his belt.