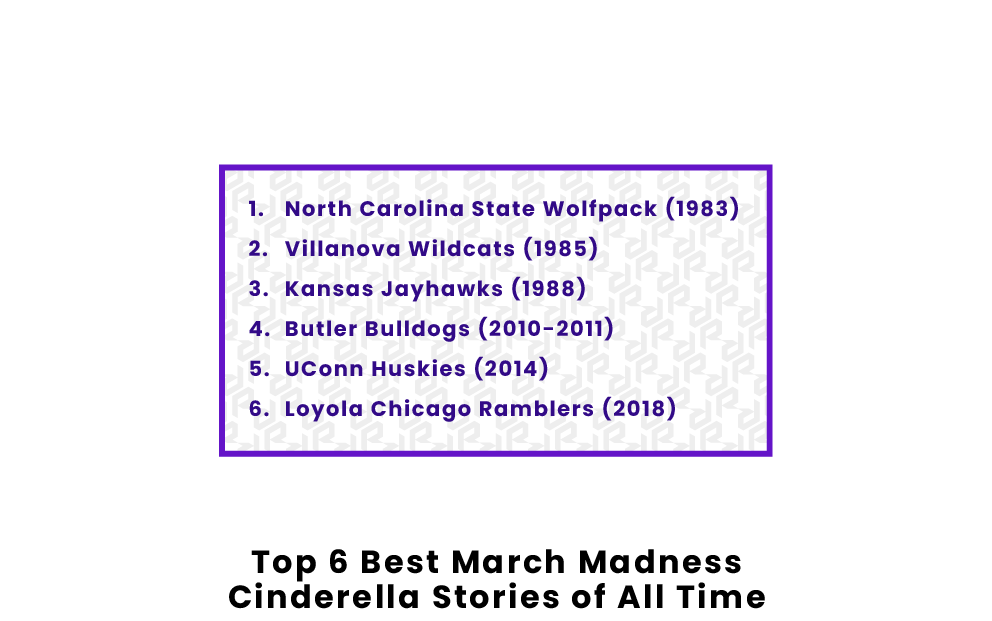 Every March, 68 of the best college basketball teams play in a single-elimination tournament for the National Championship. Most champions are among the favorites to win the tournament, but a “Cinderella” team emerges to shock the world every once in a while. This is a list of the top six best Cinderella stories.

What Are the Best March Madness Cinderella Stories of All Time?

The 1983 N.C. State team lived by one motto, “survive and advance.” The Wolfpack needed to upset both defending National Champion North Carolina, led by Michael Jordan, and Virginia, who featured the nation’s best player, Ralph Sampson, just to make it to March Madness. Once in the NCAA Tournament, N.C. State upset Virginia again in the Elite Eight and won three of its first five games by one possession. Many believed the Cinderella Story would end heading into the National Championship against Houston. The Cougars featured future Hall of Famers Hakeem Olajuwon and Clyde Drexler, known as “Phi Slama Jama.” In remarkable fashion, the 7.5-point underdogs hung tough and contained the high-flying Cougars. For the final 40 seconds of the game, the Wolfpack held for the last shot, and the game ended with Lorenzo Charles slamming it home at the buzzer after a missed three by Dereck Whittenburg.

Before 1985, under coach Rollie Massimino, Nova had never made a championship game appearance in three trips to the Elite Eight. Trailing 22-17 at halftime against North Carolina in the regional final, Massimino famously gave the “spaghetti speech” to motivate his squad, and it worked as Villanova won the second half 39-22. However, their biggest test came in the National Championship against a powerful Georgetown team, headlined by Patrick Ewing. The Hoyas were going for back-to-back championships and were favored by eight points. However, the Wildcats used a unique defensive scheme that confused Georgetown, leading to a 66-64 victory.

Before the start of the 1988 season, Kansas had high expectations. It was ranked seventh in the AP Poll and led by future first overall NBA draft pick Danny Manning. However, the Jayhawks started just 12-8 and 1-4 in conference play. By mid-February, they were no longer ranked and needed to go on a run just to make the big dance. Sure enough, Kansas closed the season winning 15 of 18 to capture the program’s second NCAA title. Its 11 total losses are still the most ever for a National Champion. In the tournament final, Danny Manning took over against number one seed Oklahoma, recording 31 points and 18 rebounds. To this day, it’s the only time in tournament history in which two teams from the same conference played in the national championship game. The 1988 Kansas Jayhawks made an improbable run, but it should be noted that they avoided playing a No. 2 seed or better until the final four against Duke. Their run was mostly memorable due to the fact that they started poorly but had the talent to win the tournament, especially because they had the best player in the country.

Making one Cinderella tournament run isn’t easy. Making two improbable National Championship berths in a row is nearly impossible, but that’s exactly what Butler did in the 2010 and 2011 seasons. The Bulldogs had two future NBA players for their 2010 season, Shelvin Mack and Gordon Hayward. They were a well-coached team led by Brad Stevens and entered the tournament as a five-seed. Butler shocked both No. 1 seed Syracuse and No. 2 seed Kansas State to make the championship game against Duke. In a tight, defensive contest, the Bulldogs came within an eyelash of pulling off another upset when Hayward’s last-second shot bounced off the backboard, off the rim, and out.

In 2011, Mack led Butler as Hayward declared for the NBA Draft. After winning its conference for the fourth straight year, the team entered the big dance as a No. 8 seed. Once again, the Bulldogs shocked the world and made the final, upsetting number one-seed Pittsburgh, No. 4 seed Wisconsin, and No. 2 seed Florida. However, Butler ran out of gas in the second half against UConn and lost the title game 53-41. Still, its back-to-back runs to the final are incredibly impressive.

In 2013, UConn was ineligible to play postseason basketball due to bad Academic Progress Rate (APR) scores. This meant the team lost many top recruits and transfers that could have played key roles for the 2014 season. Still, the Huskies had a solid year, finishing 26-8 and 12-6 in league play and earning them a No. 7 seed in March Madness. However, few predicted UConn’s second national title in four seasons.

First, the Huskies narrowly escaped their first-round matchup, winning 89-81 in overtime against Saint Joseph’s courtesy of Shabazz Napier’s 24 points. In their next four contests, UConn upset four straight teams by an average margin of victory of over eight points; it wasn’t just barely beating the better competition.

The Huskies were red-hot, and their final challenge was Kentucky, led by seven future NBA players. The Wildcats may have been a lower seed (No. 8) but were still favored by 2.5 points. However, Shabazz Napier led the Huskies down the stretch by scoring a game-high 22 points, winning the tournament’s Most Outstanding Player award.

As of 2022, only five No. 11 seeds have ever made the final four, but perhaps the most improbable of them all was Loyola Chicago in 2018. The Ramblers hadn’t made March Madness in 33 years and only had five tournament appearances before the 2018 season. Loyola Chicago began its tournament run against No. 6 seed Miami. Down by one late in the game, Donte Ingram hit a buzzer-beating three pointer from the top of the key to send the Ramblers to the Round of 32. There, they drew No. 3 seed Tennessee. Clayton Custer hit a jump shot with five seconds left to give Loyola Chicago a 63-62 win. In the Sweet 16 against No. 7 seed Nevada, Marques Townes made a three with six seconds left to ice the game and send his team to the Elite Eight. However, their run would eventually end in the Final Four with a 12 point loss against No. 3 seed Michigan. Still, Loyola Chicago’s run was remarkable and gained attention throughout the world by not just its run, but by its then 98-year-old team chaplain, Sister Jean.

What was the best Cinderella Story in March Madness?

The best Cinderella Story in March Madness history is the 1983 N.C. State team, due to its ability to come from behind late, and on many occasions, en route to a national title. In 2013, ESPN released a 30-for-30 documentary about the team, titled “Survive and Advance.” The Wolfpack are best remembered for pulling off one of the biggest national championship game upsets of all time by beating Houston, known as “Phi Slama Jama.”

What does “Cinderella Story” mean in March Madness?

A “Cinderella Story” in March Madness is a team that defies the odds as a lower seed to make a deep tournament run. For the tournament, each team is assigned a seed that’s 1-16, with the number one’s being the best-ranked teams and the number 16’s being the lowest-ranked teams. The lower the seed, the more improbable it is to make noise in the tournament. The low seeds that go far in the March Madness tournament are the ones that get labeled as “Cinderellas.”