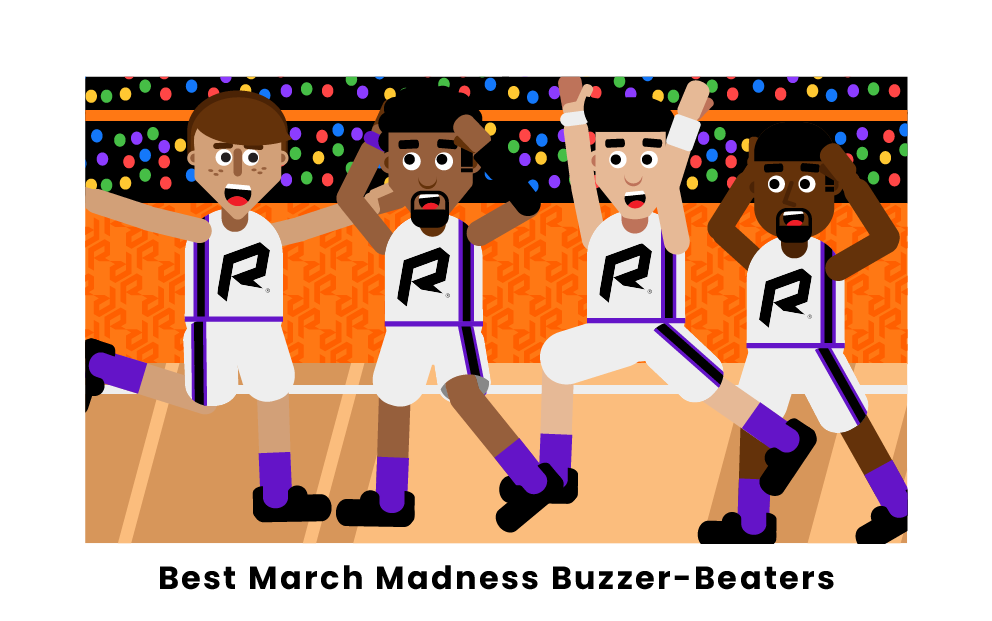 The NCAA Division I Men’s Basketball Tournament, also known as March Madness, is one of the most popular events in American collegiate basketball. Due to the event’s single-elimination structure, competitiveness stays at a high and the fate of each team is up in the air until the very last second. Listed below are the best buzzer-beaters in the event’s history.

What Are the Best March Madness Buzzer Beaters of All Time?

On April 4, 2016, the UNC Tar Heels faced the Villanova Wildcats in the final game of that year’s March Madness. Villanova junior Josh Hart made two successful free throws to take the lead from the Tar Heels with only 13.5 seconds remaining. In a quick maneuver, UNC guard Joel Barry drove the ball down the court and threw an entry pass, allowing Marcus Paige to tie up the game. After a quick timeout, an aggressive last play was made, and Kris Jenkins attempted a three-point shot at the last possible moment. The buzzer sounded just as the ball went through the net, and the crowd erupted. At the buzzer, the Villanova Wildcats became National Champions for the first time since 1985.

In the 1992 East Regional final, the defending National Champions, Duke University, faced off against the University of Kentucky. The lead was passed back and forth the entire game, until the matchup finally went into overtime. With 2.1 seconds left on the clock, Kentucky took a one-point lead thanks to a hook shot by Sean Woods. In those final two seconds, Grant Hill passed the ball across the court, where Christian Laettner took a fadeaway jumper just as the buzzer sounded. With that buzzer-beater, Duke earned their second consecutive place in the Final Four and went on to win the National Title again.

The Mario Chalmers shot vs. Memphis, from every angle

In the 2008 Championship game of March Madness, the Kansas Jayhawks faced the Memphis Tigers. With just over two seconds left, a wild play gave Memphis the lead. Thanks to a Hail Mary pass at the last moment, Kansas guard Mario Chalmers hit a three-pointer so that Kansas tied at 63-63. Forced into overtime, Kansas dominated for the rest of the game and won with a final score of 75-68. Thanks to Chalmers’ buzzer-beater, Kansas won their first national title in 20 seasons.

In the final March Madness game of 1983, NC State’s Wolfpack faced the Houston Cougars. After a missed shot by teammate Dereck Whittenburg, NC State’s Lorenzo Charles grabbed the ball in mid-air, right underneath the basket, and dunked it in. Those two points gave the Wolfpack the lead just as the final buzzer sounded. Thanks to one of the few dunks at the buzzer in American collegiate basketball history, NC State won the National Championship. In this historical moment, they also became the first team to win March Madness with 10 losses earlier in their season.

In the first round of 2016’s March Madness tournament, the underdog Northern Iowa Panthers took on the Texas Longhorns. With almost three seconds left in the game, the Longhorns narrowly tied the Panthers for a total of 72-72. Then, from more than halfway down the court, Northern Iowa’s Paul Jesperson took a step and then hurled the ball all the way across the court. When the ball fell in just as regulation ended, Panther fans erupted. Though the team would go on to horrible defeat in the next round, Jesperson’s buzzer-beater is still deemed one of the most memorable in NCAA history.

In the national semifinal game, the UCLA Bruins faced the undefeated Gonzaga Bulldogs. With 3.3 seconds left in overtime, both teams were tied at 90-90 thanks to a layup by UCLA’s Johnny Juzang. Facing the possibility of a second overtime, Gonzaga’s freshman forward Jalen Suggs took a few quick dribbles and launched the ball from just before the half-court line. Bouncing off the backboard at the buzzer, the shot went in, and Gonzaga continued their undefeated streak. Though they would ultimately lose to Baylor in the final matchup, Suggs’ buzzer-beater will live on in NCAA infamy.

The 1987 National Championship game featured two of the biggest juggernauts in college basketball history in Syracuse and Indiana. The two teams were led by legendary coaches Jim Boeheim (Syracuse) and Bobby Knight (Indiana). The game was extremely hard-fought and close up until the final seconds. After taking a foul and sending Syracuse to the free-throw line in a tie game, it was assumed that the ball would be put into the hands of Indiana’s top-scorer, Steve Alford. However, Syracuse missed the free throw and Indiana assumed possession with a chance to win the game. The ball ended up in the hands of Keith Smart, who made a two-point field goal to seal the victory for Indiana. While there were still about four seconds left on the clock, it is still considered one of the best buzzer beaters of all time, as Syracuse was unable to get the ball up the court in time for another shot.

The 1998 first-round matchup between the Valparaiso Beacons and the University of Mississippi Rebels was a classic underdog contest between a No. 13 seed (Valparaiso) and a veteran No. 4 seed (Ole Miss). However, with only 2.5 seconds left on the clock, Valparaiso was only down by two points. After Ole Miss failed to sink a pair of free throws, leaving Valparaiso with a last-ditch opportunity to win, the Beacons’ Jamie Sykes threw the ball inbounds to Bill Jenkins, who made a quick pass to senior guard Bryce Drew as he ran downcourt. Running in from the right wing, Drew lifted and sank a smooth three-point shot, later referred to as “The Shot,” to win the game, which was Valparaiso’s first-ever win in the NCAA tournament. Valparaiso later beat Oklahoma City to advance to the Sweet 16, but fell there to the University of Rhode Island. Bryce Drew later went on to serve as head coach for Valparaiso and Vanderbilt, and currently coaches the Grand Canyon Antelopes.

Jordan Poole, who is now a star for the Golden State Warriors, had a very successful career at Michigan before declaring for the NBA Draft. One of the most clutch shots he ever hit was against six seed Houston in the second round of the 2018 March Madness tournament. Michigan was down by two points entering the final seconds of the game. Houston did not apply any pressure on the inbound pass, hoping to force Michigan to take a hail mary shot from deep. However, Michigan was able to inbound the ball to Muhammad-Ali Abdur-Rahkman, who took two dribbles and made a jump-pass to Jordan Poole. Poole, who had received a screen from Iba Watson outside the arc, was tasked with making the final shot. He delivered a shot with 0.8 seconds left in the game from the right wing to win the game by one. The three-point shot dropped, and the court was swarmed by players and staff.

How many buzzer-beaters have there been in March Madness?

There have been a total of 127 game-winning buzzer-beaters in the history of the NCAA Division I Men’s Basketball Tournament, starting with Herb Wilkinson’s finals-winning shot in 1944 and continuing most recently with Paul Atkinson’s buzzer-beater in the First Four of the 2022 tournament. This referenced number defines a buzzer-beater as any shot successfully made with two seconds or fewer left in the match.

What is a buzzer-beater in basketball?

Traditionally, a buzzer-beater is colloquially used as any last-ditch attempt to even or surpass the other team’s score at the very end of a basketball game, named so because such a shot would be made as the conclusive buzzer sounds. It can also be defined more specifically as any shot made within the final two seconds of regulation or overtime section.

Have there been any overtime buzzer-beaters in March Madness?

There have been multiple overtime buzzer-beaters in the history of March Madness. In the 1992 East Regional final, Christian Laettner successfully threw a two-pointer just as the buzzer went off. With that buzzer-beater, Duke won their place to compete again for the national title. Also, in the 2021 semifinal, Gonzaga University’s Jalen Suggs launched a three-pointer from halfway down the court.