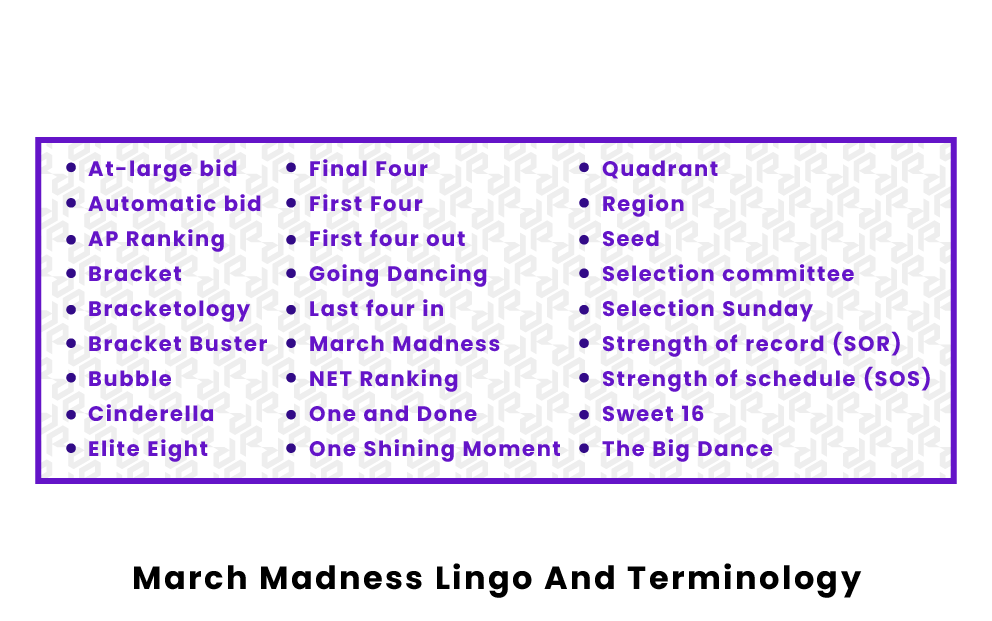 March Madness is a longstanding tradition for NCAA Division I men’s basketball. Since 1939, the nation’s best college basketball teams have competed in a tournament, now known as “March Madness,” with the end goal to win the National Championship. The tournament takes place every spring, captivating the attention of millions of viewers worldwide. Learn below all the most important lingo and terminology unique to the tournament.

At-large bid: An invitation given out to 36 teams that did not win their respective conference tournaments but impressed the selection committee enough to earn a spot to compete in the national tournament.

Automatic bid: An invitation to compete in the national tournament that is automatically awarded to the 32 teams that win their respective conference tournaments nationwide.

AP Ranking: A system used to rank the top 25 Division I teams across the country, based on the ballots of 65 different sports journalists. However, the ranking system does not impact the selection process for the tournament.

Bracket: The method of organizing teams into the four regions for the tournament and setting up matchups between teams based on their seeds. The bracket serves as the overall schedule for the NCAA basketball tournament.

Bracketology: The art of predicting which teams will be selected to participate in the tournament and which seed each team will receive.

Bracket Buster: When a team that is not expected to win ruins one’s bracket by beating a team that the individual predicted would advance far into the tournament.

Cinderella: A team that is not expected to advance very far in the tournament but exceeds expectations and makes a significant run at the championship.

Elite Eight: The fourth round of the tournament, where only eight teams remain competing, and the winners of each game advance to the Final Four.

Final Four: The second to last round of the tournament, where only four teams remain competing, and the winners advance to the national championship.

First Four Out: The top four teams that are not selected to compete in March Madness. Instead, these teams are usually placed in the top four seeds to compete in the NIT Championship tournament.

Going Dancing: Oftentimes, when teams are selected to compete in the tournament, they exclaim, “we’re going dancing!” This is a reference to March Madness’ nickname, “The Big Dance.”

Last four in: The last four teams selected by the committee to compete in the NCAA Division I basketball tournament.

March Madness: The NCAA Division I men’s basketball tournament that takes place in March and April every year. The term was not associated with the tournament until 1982.

NET Ranking: a relatively new system that the NCAA selection committee uses to aid them in determining which teams should make the tournament. This ranking system uses advanced metrics along with a “Quadrant” system to rank every Division I team.

One and Done: A term often used to refer to the nature of the NCAA tournament, where one loss results in a team being eliminated from the tournament.

One Shining Moment: The song that plays right after the tournament is over, accompanied by some of the best highlights and moments from the games.

Quadrant: A divisional unit of the NET ranking system. The results of every team’s regular season games are divided into four different quadrants. Each quadrant is broken up into their opponent’s NET ranking along with where the game was played. For example, a Quadrant 1 victory can be against an opponent ranked 1-30 if the game was at home, 1-50 if at a neutral site, and 1-75 if away. Teams want as many Quadrant 1 victories as possible and as few Quadrant 3 and 4 losses as possible.

Region: The March Madness bracket is broken up into four distinct regions: East, West, Midwest, and South. For the first four rounds of the tournament, teams compete in one of the four regions. The fourth round is the regional championship, also known as the Elite Eight, and the winners of each regionally advance to the Final Four.

Seed: Numbers assigned to each team that decides where they will be placed in the tournament bracket.

Selection committee: A committee of ten members selected from different schools and conferences nationwide that are in charge of selecting, assigning seeds to, and organizing teams into the tournament bracket.

Selection Sunday: The Sunday before the First Four every year when the selection committee announces which Division I teams have been selected to compete in the NCAA basketball tournament.

Strength of record (SOR): A measurement of the value and difficulty of a team’s wins and losses for the current season.

Sweet 16: The third round of the tournament, where 16 teams are left competing, and the winners of each game advance to the Elite Eight.

The Big Dance: Another term for the NCAA Division I basketball tournament.

Some important March Madness terms are bid, seed, and Selection Sunday. Bids are invitations to the tournament and can be at-large or automatic, depending on whether they are given based on a championship win or strength of record. Seeds are the rankings teams are given at the beginning of the tournament. Selection Sunday is the day that the selection committee extends bids and ranks seeds in the bracket.

What is another name for March Madness?

Another name for March Madness is The Big Dance. In addition to that affectionate nickname, the tournament is officially called the NCAA Division I men's basketball tournament. March Madness games are broadcast under the trade name NCAA March Madness.

How does March Madness seeding work?

Each team is assigned to a region and given a number from one to 16 (four of each seed or one per region). Within each region, the highest seed plays the lowest seed (for example, the number-one seeded team plays the number-16 seeded team). The selection committee decides the seed of each team based on a variety of factors, including strength of record, strength of schedule, and the value of each team’s wins and losses.