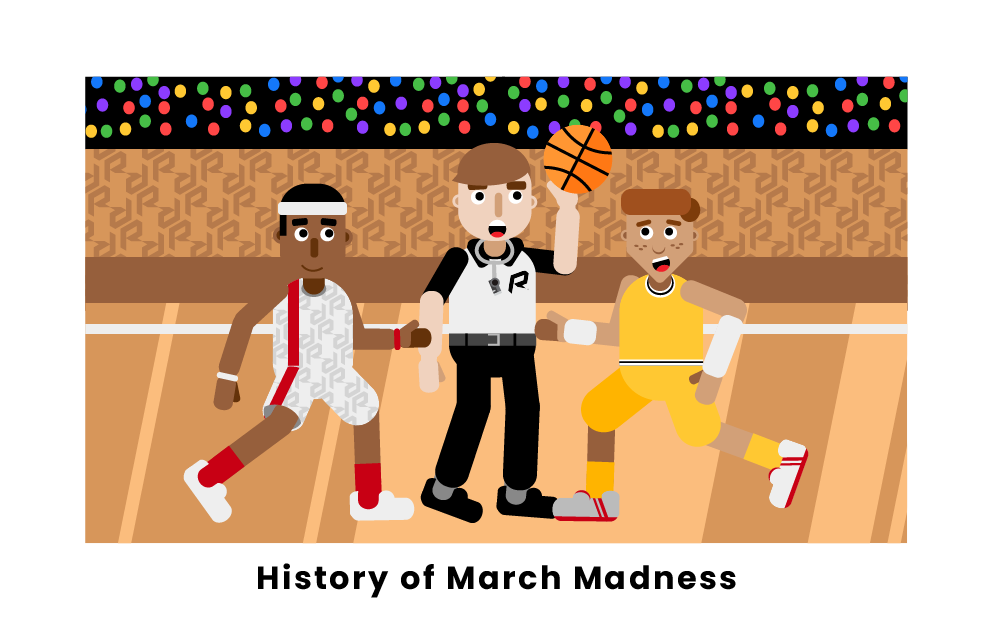 March Madness is one of the most popular tournaments in all of sports. It features 68 NCAA Division I basketball teams in a single-elimination format. Every year, the action seems to reach new heights. Continue reading to learn about the early days of the NCAA men's basketball tournament known as March Madness.

The phrase "March Madness" is credited to two people. Most believe it was Henry V. Porter who first used those famous words in 1939. Porter was the assistant executive secretary of the Illinois High School Association (IHSA). The term was first used to refer to high school sports, and he used it to describe how the fans looked forward to the Illinois High School Basketball Championship. However, etymologist Barry Popik is also said to have first used the term, but eight years earlier. He was also referencing it in high school basketball but in the state of Indiana.

Regardless, the NCAA Tournament began in 1939 and originally featured just eight teams. The first National Champion was Oregon, who defeated Ohio State in the final game 46-33. The tournament doubled to 16 teams in 1951 and again in 1975, bringing the total field to 32. Until the 1980s, the term "March Madness" wasn't associated with the tournament. Then came along broadcaster Brent Musburger, who is often attributed for making the connection. Usage of the term became extremely popular primarily because the tournament further expanded to 64 teams in 1985. This made it even more unpredictable, as Villanova won the tournament as an eight seed, which is still the lowest seed ever to win. In 2011, the tournament was expanded one more time to its current format of 68 teams.

The most successful team in March Madness history is UCLA. The Bruins have won a record eleven National Championships, ten of which came under legendary head coach John Wooden. While coaching UCLA from 1948 to 1975, Wooden made the tournament 16 times and won over 80% of his games. However, the school's last National Championship came back in 1995.

Other iconic figures come from Duke. Head Coach Mike Krzyzewski currently holds the record for most tournament wins and has five national titles to his name. Christian Laettner, who played for Coach K from 1988 to 1992, is the NCAA tournament's all-time leading scorer with 407 points. Laettner famously hit one of the most iconic shots in tournament history in the 1992 Elite Eight, when he caught a full-court inbound pass from teammate Grant Hill and hit a turnaround jumper as time expired. The Blue Devils would go on to win the tournament that year.

How did March Madness become so popular?

The NCAA Tournament wasn't originally considered the most prestigious college basketball tournament. In fact, this honor belonged to the National Invitation Tournament (NIT), which was founded a year before the NCAA Tournament. The games were played in New York at Madison Square Garden, which attracted more media coverage at the time. However, once the NCAA started including more teams and landed TV deals in the 1980s, it became more popular.

When did March Madness start?

March Madness started in 1939 with the first-ever NCAA Tournament. It featured eight teams and two regions. Brown, Ohio State, Villanova, and Wake Forest were in the East region; the West region consisted of Oklahoma, Oregon, Texas, and Utah State. The Oregon Ducks captured the title with a 13-point victory over the Ohio State Buckeyes in the final game.

Why is March Madness so important?

March Madness is extremely important for colleges and universities because it brings them recognition on a big stage (which could lead to acquiring more students to attend the school) and additional revenue. It's a highly recognizable event that inevitably provides excitement and unifies the students, alumni, faculty, and other fans of each school for a single purpose: winning the tournament. It's also fun for fans because of its reputation to have seemingly impossible upsets and buzzer-beaters happen on a regular basis.