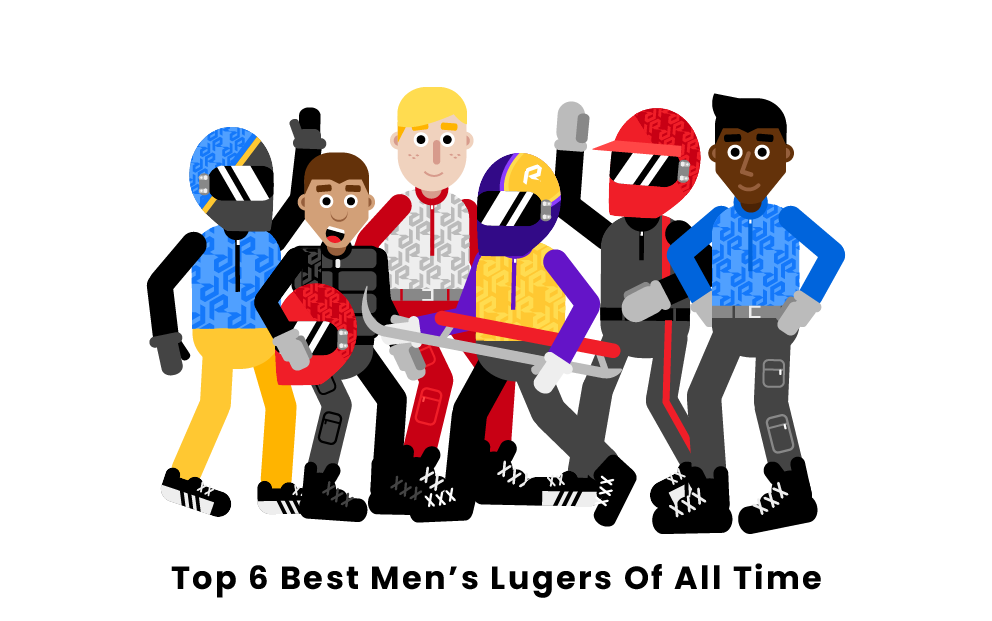 Luging is a sport that many people are less than familiar with, but nonetheless offers a great deal of excitement and challenges for athletes to overcome. Sometimes called “the fastest sport on ice,” it was first added to the Winter Olympic Games in 1964, making its debut in Innsbruck, Austria. At the Winter Olympics, luge events are divided into three categories: Men’s, Women’s, and Mixed, with one event each in the Men’s and Women’s categories and two in the Mixed category. Many athletes have excelled at the luge over the course of its Olympics history and are highlighted below.

Who are the best men’s luge athletes of all time?

One of the most decorated and competitive lugers, Armin Zöggeler fell in love with the ice at the young age of seven. He began training under a luge coach as a teenager and won his first Junior World Cup at 14. After this first impressive victory, he went on to win five World Championships in the sport, and from 1997 and 2006, he placed first in the overall rankings of the Luge World Cup five times, earning the nickname “the Cannibal.” Zöggeler worked as a policeman when not on the luge, and in both professions, he earned a reputation for being calm and unshakeable.

Zöggeler’s Olympic debut came at the age of 20, in the 1994 Lillehammer Winter Games, where he earned a bronze medal. In 1998, he moved one step up the pedestal at the Nagano Games, taking silver. Zöggeler took the final step upwards in his Olympics career at Salt Lake City in 2002, where he finally won his first gold. His Olympics career was not yet over, though. In front of his home country’s crowd at the Turin Games in 2006, Zöggeler notched a second consecutive gold in the luge, after a dicey final few runs that nearly cost him the medal. Zöggeler won his fifth consecutive medal in the Vancouver 2010 Olympics, a bronze, and then won his sixth overall Olympic medal at Sochi in 2014, taking another bronze. This feat made Olympic history, with Zöggeler becoming the first athlete to win six medals at six consecutive Olympic Winter Games. This victory marked his retirement from the sport, leaving behind a stellar career.

Another prominent luger, German Goerg Hackl made his Olympic debut at the 1988 Calgary Winter Games, earning silver in an event he lost to fellow German Jens Müller. Hackl’s difficulty with starting inspired him to build a start range near his home in Berchtesgaden to practice. This decision allowed him to improve well enough to win gold at the 1992 Winter Games in Albertville, Canada, a win which was the closest men’s luge victory in 24 years. Hackl repeated his victory against the same opponent, Austria’s Marcus Prock, in 1994 and won by an even closer margin, with a combined victory of barely 35 centimeters over the course of his four runs.

In 1998, Hackl returned to the Nagano Winter Olympics but faced protests from other lugers on account of his new boots, which they considered aerodynamically advanced enough to give him an advantage. However, Hackl was allowed to compete and earned his third gold medal, becoming the sixth person in the history of the Winter Olympics to win the same individual event three times in a row. At the 2002 Salt Lake City Games, Hackl’s performance fell slightly, but he nonetheless earned another silver medal. Hackl participated in his sixth Olympics at Turin in 2006, at the age of 40, but placed 7th and subsequently retired.

Another German luger, Tobias Arlt has competed in the sport since 1991, when he first appeared as a backdriver. He made his official debut in 2006, alongside his luge partner, Tobias Wendl, whose identical first name has led them to be referred to as “the Two Tobis.” At the 2008 FIL World Championships, Arlt and Wendl earned a silver in the men’s doubles event. Arlt later won a silver in the men’s doubles and a bronze in the mixed disciplines at the 2010 FIL European Luge Championships, as well as a gold medal at the 2013 FIL World Luge Championships. Making his Olympic debut at Sochi in 2014, Arlt won two gold medals, one in the men’s doubles with Tobias Wendl and a second in the team relay.  He has also won first place in four World Cups throughout his career. Arlt returned to the Olympics in 2018 for the Pyeongchang Games, winning two more gold medals in the same two events, bringing his total Olympic medals to four golds. Overall, Arlt’s success in the Olympics, World Cup, and World Championships has cemented him as one of the greatest lugers of all time.

The luge partner of Tobias Arlt, Tobias Wendl has shared most of Arlt’s accomplishments by virtue of their cooperation as a luge team. Joining Arlt in their 2006 debut, Wendl helped the team grow in prominence, eventually earning a silver in the men’s doubles event at the 2008 FIL World Championships. Along with Arlt, Wendl won two gold medals at the Sochi Games in 2014 as part of the men’s doubles event and has also won four World Cup championships. Wendl also returned to the Olympics in 2018, participating with Arlt in Pyeongchang and winning two more gold medals in the men’s doubles and the Team Relay, bringing his Olympic gold medal count to four. In addition to his athletic pursuits, Wendl is a Master Sergeant in the German Army.

Another standout German doubles luger, Stefan Krauße has competed for his home country since 1985, first for the German Democratic Republic, and then for Germany after 1992. Alongside his luge doubles partner, Jan Behrendt, Krauße began competing for Germany in the mid-1980s, performing at the 1985 European Junior Championships. The pair won four World Championships as a luge team in 1989, 1991, 1993, and 1995. They were also runners-up in the 1996-97 World Championships. The pair won the Luge World Cup championship in 1994, 1995, and 1996, and were European Champions in 1996.

Krauße made his Olympics debut at the Calgary 1988 Winter Games, winning silver. In 1992, at the Albertville Games, Krauße and Behrendt won a gold medal in the doubles event. They returned to the games in 1994, winning a bronze medal in Lillehammer, and then returned a fourth time in 1998 to win a gold medal at the Nagano Games. After the 1998 Winter Games, Krauße and Behrendt announced their retirement from luge competition.

Also hailing from Germany, Felix Loch is a rising star on the luge, having amassed a successful Olympic career since his debut in the 2010 Vancouver Games. Luge proved to be in Loch’s blood from an early age, as his father, Norbert Loch, represented Germany in the sport during the 1984 Sarajevo Winter Olympics. Loch was recognized for his talent early in his career, winning junior world titles for the individual and team events in 2006. At 18, Loch became the youngest world champion in luge’s sporting history at the 2008 Oberhof Championships. Two years later, he debuted at the 2010 Vancouver Games and became the youngest gold medal-winning luger in Winter Olympics history.

After his stellar Olympic debut, Loch won both the World Cup and World Championship doubles events in 2012 and 2013, and also managed 14 wins on the international circuit over those two years. Loch is known for his scientific approach of applying physics to luging, which he believes enhances his performance. His practice allowed him to win a third gold medal at the Sochi Games in 2014, after which he won another three World Cups and three more World Championship golds for a 12-gold total. However, Loch’s third Olympics appearance at Pyeongchang in 2018 resulted in him coming in 5th, though he hopes to make up for his non-placement in 2022.

Who is the greatest men’s luger of all time?

Italian Armin Zöggeler and German Georg Hackl are regarded by many as the greatest lugers of all time. Zöggeler is known for the sheer number of medals he has won at the Olympics; he is the only athlete in Olympics history to win six medals at six consecutive Olympic Winter Games. Hackl, meanwhile, is another decorated luger who has won the gold medal for individual men’s luge three times in his Olympic career. Many consider Hackl the superior luger for his greater number of gold medals, though Zöggeler has medaled more often and at a greater number of Olympic Games.

Which men’s luger has the most FIL World Luge Championship wins?

Who holds the record for the fastest men’s luge time in the Olympics?

Pages Related to Top 6 Best Men's Lugers Of All Time