How Does Scoring Work in Luge? 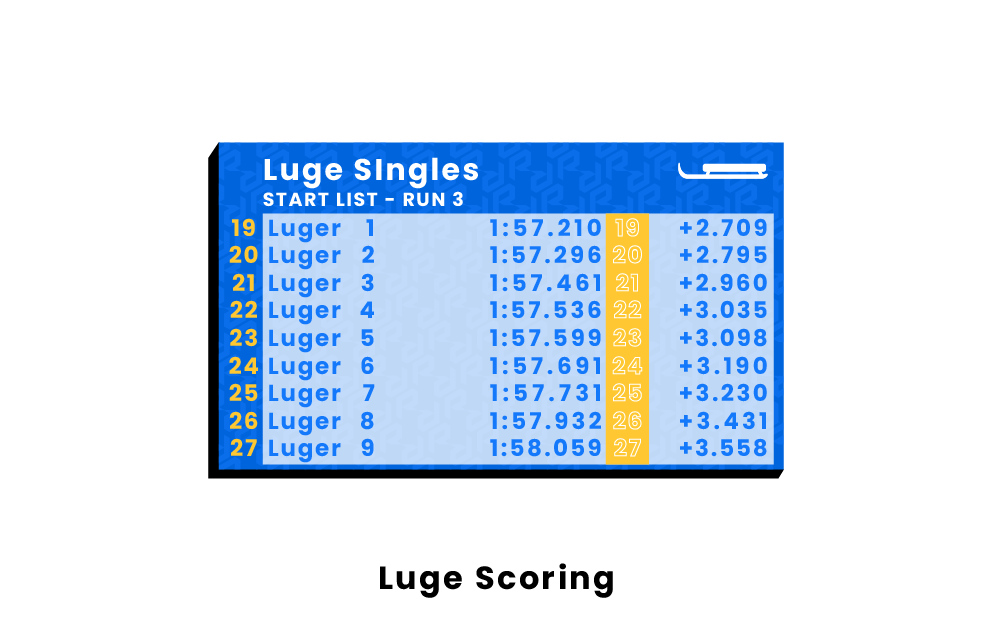 Luge is considered the fastest winter sport that an athlete can participate in. Participants lie face up on top of a sled and race down a course. The course is a curved downward track with a surface of ice. As a result, participants complete luge runs at high speeds and in a short time. Success in the sport is determined solely by how fast participants can get from the beginning of the course to the finish line on their sled. There is no point value system used for scoring luge races. Instead, scoring is based on timing to the thousandth of a second.

Standings After Each Run

In luge, participants complete multiple runs down the course. At the end of each run, their standings are determined by how fast they made it down the course. The competitor with the shortest amount of time to complete the run is recognized as being in first place. After completing a second run, the competitor’s run time is added to the run time of the first run. Various competitions will have differing amounts of runs that competitors need to complete. At the FIL World Championships, participants have their times added up from two total runs. After all of the runs have been completed, the participant with the lowest total time for their combined runs is deemed the competition’s winner.

Since the sport of luge doesn’t use a traditional point system, point deductions for violations do not exist. Instead, violations exist within luge that lead to immediate disqualification from the competition. In order to have a valid luge run, a competitor must stay on their sled with their body face-up for the whole duration of the run. In addition, competitors can’t push their sled with any part of their body while completing their luge run. Finally, competitors cannot walk with their sled towards the finish line. Any of these violations will make their run times invalid.

The scoring system for luge at the Winter Olympics is the same as scoring for all other luge competitions throughout the world. The differences with the luge at the Winter Olympics have to do with the formatting and structure of the event. In singles competition, lugers make four total runs down the course. The competition is spaced out over two days, with two runs being completed each day. In doubles competition, lugers complete two total runs in one day. In either competition, the total times for runs are added together to determine a winner. With the luge team relay event, each team has three sleds that take part in the race: a women’s singles sled, men’s singles, and a doubles sled. A touchpad system is used to open the top gate once the first member of their team crosses the finish line. The time for the whole team to complete the event is used to crown a winner.

What is the scoring system in luge?

The scoring system in luge is based on how fast competitors can complete a run. A timer keeps track of the time between a luger passing the starting line and making it completely across the finish line. Timing for a luge run is recorded to the thousandth of a second, which makes luge the most accurately timed winter sport.

How does luge scoring work in the Olympics?

The scoring for luge in the Olympics is similar to scoring in any other luge competition. A competitor in the singles competition will complete four luge runs in two days at the Olympics. Their run times are combined to get a total run time, which is used to determine final rankings. For doubles competition, competitors complete two runs in one day. For relay teams, three sleds race per team, and time is recorded continuously until all members complete the course. Each sled is released as soon as their team’s previous sled crosses the finish line.

How many runs are featured in each luge discipline?

Pages Related to How Does Scoring Work in Luge?